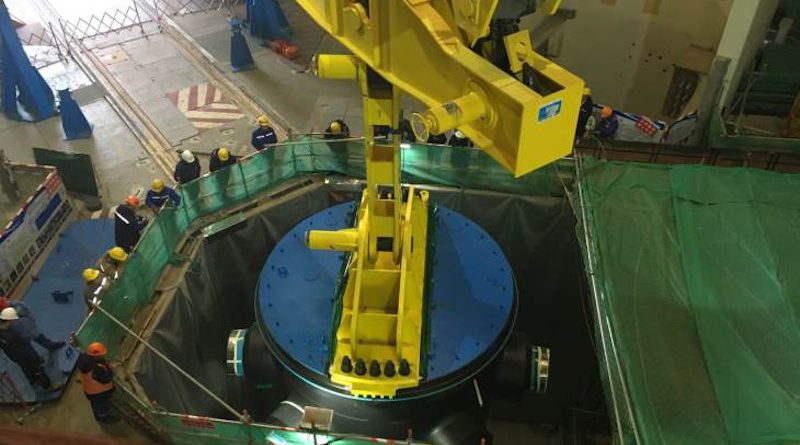 The reactor pressure vessel for Hongyanhe 6 was installed in December 2018 (Image: CGN)

Cold functional testing was recently completed at unit 5 of the Hongyanhe nuclear power plant in China’s Liaoning province, China General Nuclear (CGN) announced. The ACPR1000 reactor is scheduled to enter commercial operation in the first half of 2022.

Cold functional tests are carried out to confirm whether components and systems important to safety are properly installed and ready to operate in a cold condition. They are the first comprehensives tests to check the performance of the entire reactor. The main purpose of these tests is to verify the leak-tightness of the primary circuit and components – such as pressure vessels, pipelines and valves of both the nuclear and conventional islands – and to clean the main circulation pipes.

The cold functional testing of Hongyanhe 6 began on 19 October. After completing a series of commissioning tests for the reactor coolant system, chemical and power control system, the primary circuit reached the 228 bar maximum pressure platform on 25 October for pressure holding test. The tests were completed on 27 October. A total of 68 commissioning tests were completed over this period. CGN said “all the data meet the design requirements and the primary circuit hydraulic test is qualified.”

Phase II of the Hongyanhe plant – units 5 and 6 – comprises two 1080 MWe CGN-designed ACPR-1000 reactors. Construction of unit 5 began in March 2015 and that of unit 6 started in July the same year. Cold functional testing of unit 5 began on 10 October last year, marking the start of its commissioning phase.

In late December last year, CGN announced a change in the schedule for starting up units 5 and 6. It said the units are now expected to start operating in the second half of 2021 and the first half of 2022, which is, respectively, one year and six months later than previously scheduled.

The Hongyanhe plant is owned and operated by Liaoning Hongyanhe Nuclear Power Company, a joint venture between CGN and State Power Investment Corporation, each holding a 45% stake, with the Dalian Municipal Construction Investment Company holding the remaining 10%.

The ACPR-1000 – a three-loop unit with double containment and core-catcher – was launched by CGN in November 2011. In 2012 central planners in Beijing directed China National Nuclear Corporation (CNNC) and CGN, to ‘rationalise’ their reactor programmes. This meant CNNC’s ACP1000 and CGN’s ACPR-1000 were ‘merged’ into one standardised design – the Hualong One (HPR1000). Yangjiang units 5 and 6 were the first ACPR-1000 units to enter commercial operation, in July 2018 and July 2019, respectively. The ACPR-1000 is also being built as units 5 and 6 of the Tianwan plant. Tianwan 5 entered commercial operation in September, while Tianwan 6 is expected to be put into commercial operation by the end of 2021.