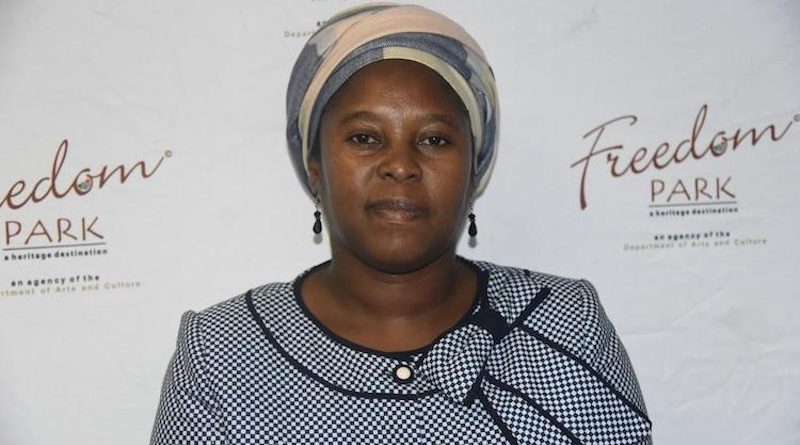 By Kester Kenn Klomegah and IDN

Under the Russian Chairmanship of BRICS 2020, Moscow has organised and hosted a series of corporate conferences, business forums and other important events. For example, the Roundtable discussion on the theme “International Cultural Cooperation for Strengthening BRICS Unity” brought high-profiled participants from Brazil, Russia, India, China and South Africa. It was part of efforts at broadening the scope of cooperation in different directions, and steps toward attaining an admirably influential position and becoming active on the global stage.

Ms Jane Mufamadi, Chief Executive Officer (CEO) of the Freedom Park Memorial Museum Complex in Pretoria, South Africa, participated in the discussions of the BRICS Working Group on Cultural Cooperation moderated from Moscow. In this IDN interview, Jane Mufamadi sampled and highlighted (language, culture and tourism) some of the most salient issues that were discussed during the last meeting. Here are excerpts from the interview:

IDN: What aspects of cooperation strike you most during online roundtable discussions on “International Cultural Cooperation for Strengthening BRICS Unity” moderated from Moscow?

Jane Mufamadi (JM): I was highly impressed by the depth of the presentations and many ideas from various countries. The purpose is to strengthen BRICS and its programmes. The roundtable provided an opportunity to learn, share experiences as well as interact with peers and colleagues. The host, Russia, also did a wonderful job in assembling a relevant team of speakers who are knowledgeable and committed to the success of BRICS.

IDN: In your opinion and from that of South Africa’s position, how important could cultural cooperation strengthen unity among BRICS? Do you agree that there are diversities in culture among the group?

JM: I believe cultural cooperation is the bedrock of BRICS as it offers an opportunity to get to know each other. I agree that there are diversities, but this should strongly be viewed as a source of strength because a variety of perspectives can only enrich us, and we will emerge stronger. In South Africa, we talk about unity in diversity or a rainbow nation. We believe that diverse cultural perspectives can inspire creativity and innovation. Cultural diversity also offers greater opportunities for personal and professional growth.

IDN: Could you highlight some of the initiatives that were presented during the meeting? The initiatives presented by South Africa. The reaction of your colleagues from Brazil, Russia, India and China.

JM: Some of the initiatives included the focus on the role of heritage institutions and museums in the promotion of people-to-people relations (an example of Freedom Park that has names of people from most of the BRICS countries, which highlights the historical connections). Other proposals relate to the involvement of youth in the cultural exchange programmes, establishment of the Program for Professionals and Leaders within the BRICS. The promotion of BRICS Cultural tourism in order to provide direct communication between the countries and solidify the people-to-people relations. The reaction from colleagues was very positive and some countries actually shared similar ideas.

IDN: What challenges are there in promoting civil society, youth and tourism exchanges as part of public diplomacy of BRICS? How did the roundtable meeting participants look at these in practical terms?

JM: The main challenge is support and funding and some of the laws that make it difficult to achieve the goals. The participants made relevant recommendations that will address these challenges, for example, the establishment of the joint Fund for Grant Support for Cultural Projects and Civil Initiatives within BRICS. This will assist in promoting multilateral cooperation between the Alliance member states within the BRICS frameworks.

Another aspect discussed was the idea to simplify visa procedures for the BRICS citizens so that there is easy movement and the cutting of red tape for those who want to travel amongst the BRICS countries.

IDN: What could be the best way to systematise and to combine efforts in implementing all these new initiatives and recommendations arrived at the Civil BRICS 2020? In you view, how do you see the way forward for the Association of NGOs among the BRICS?

JM: Civil societies are very resourceful and if given the opportunity, the Association will make great stride. The first steps should involve improvement of communication infrastructure (take advantage of digital technology) amongst member states whereby it will be easy to share information. It is particularly important to strengthen rural digital infrastructure.

Furthermore, encouraging the promotion of BRICS languages for ease of access (for example, South Africa is already encouraging schools to teach Chinese Mandarin and the department of Tourism has also trained tourist guides from key heritage institutions in South Africa, to learn Mandarin for tours). Initiatives like these can be replicated to learn other BRICS languages and other countries can do same.