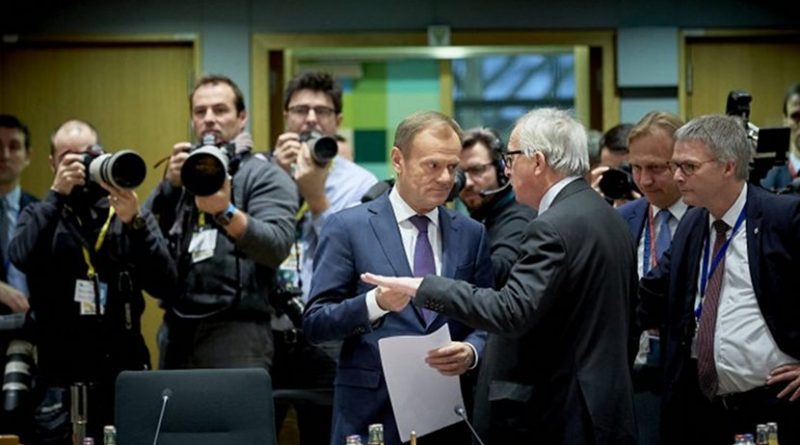 “A year ago, we promised concrete steps to strengthen the economic and monetary union”, European Council President Donald Tusk said after the euro summit. “Today, leaders delivered on this promise,” he added.

But some arrived unhappy to the end station, as the results were far from the original ambition to bolster the common currency.

The ‘window of opportunity’ seen by many in Brussels and in the capitals to bolster the euro concluded without the risk-sharing instruments, key to complete the monetary union.

Germany succeeded in watering down the euro summit conclusions as the country continues to oppose the completion of the banking union with a European-wide guarantee for bank depositors.

An agreement reached by finance ministers early this month set up a high-level group to come up with proposals to progress on this guarantee by June.

The ministers’ text was the basis for the summit conclusions.

The EU heads of state and government also mandated their finance ministers to work on the details of a new fund to support reforms in member states.

However, they did not contemplate any stabilisation function for this new instrument to address sudden economic shocks, seen as the first step toward a eurozone budget.

“I have the impression that we move forward, but not fast enough”, said European Commission President Jean-Claude Juncker.

“We do not feel satisfied,” said Spain’s Prime Minister Pedro Sánchez. The decisions went “in the right direction”, he said, but are “incomplete and not enough”.

Spain, France and Portugal were among the countries pushing for more ambition to deepen the eurozone, by completing the banking union to protect depositors or setting up a eurozone budget that could protect European jobless in the future.

French President Emmanuel Macron was the biggest promoter of the eurozone budget, which would represent the first step toward a fiscal union.

Macron said it was the first time that “a clear mandate” had been given to finance ministers for creating a eurozone budget, with a target date set for June 2019.

“One year ago, many considered it impossible,” Macron remarked, saying Franco-German cooperation had made it possible “to convince our most reluctant partners”.

“France continues to consider that it is important also to have a stabilisation function, but there was no consensus today on this function,” Macron said. “However, I do not give up on the idea,” he continued.

Germany accepted part of Macron’s agenda to reform the euro area. However, a dozen countries led by The Netherlands opposed any additional fiscal transfers in Europe as they perceive that some countries need to put their house in order first.

German Chancellor Angela Merkel admitted that the Franco-German proposal for a eurozone budget “has been controversial” and it was explained once again to the leaders.

“We have adopted substantial parts of what Macron has proposed, the French president was quite satisfied, we made a good contribution with the Franco-German cooperation,” she told reporters after the summit.

EU leaders endorsed the creation of a ‘backstop’ to support the pot to resolve Europe’s ailing banks with around 60 billion as from 2024.

The euro summit also supported strengthening the powers of the ESM, the EU’s rescue fund, to provide precautionary credits to countries in trouble but under strict conditionality.

But this package came only after a year of hard discussions and excluded the most ambitious reforms: a European guarantee for banks’ deposits under €100k and a eurozone budget to stabilise countries suffering sudden shocks.

The European Deposit Insurance Scheme (EDIS) is the remaining pillar of Europe’s banking union and would help to avoid bank runs as depositors would feel protected by a European umbrella.

This guarantee was not even mentioned in the summit conclusions because of Berlin’s opposition. The text only refers to a letter in which finance ministers called for more technical work on this front earlier this month.

As leaders were discussing the elements of the final package, a Spanish diplomat said with a hopeless face that they were fighting, together with France and Portugal, to protect the agreement reached by the finance ministers.

In a vague reference, leaders called “to advance work on the Banking Union and for ambitious progress by spring 2019 on the Capital Markets Union, as outlined in the Eurogroup report to leaders.”

As regards the new instrument to support reforms, the leaders mandated their finance ministers to work “on the design, modalities of implementation and timing of a budgetary instrument for convergence and competitiveness for the euro area”. Candidates to adopt the euro could participate too.

The conclusions stated that the features should be agreed by June 2019, as it will be part of the next EU’s long-term budget (the Multi-annual Financial Framework).

The fund would regroup European Commission’s proposals to support reforms and stabilise eurozone economies, totalling €55 billion, although the leaders did not specify the size of the new fund.

“I am relatively happy about today’s discussion, although I would like a more enthusiastic response to the stabilising function we propose,” Juncker said.