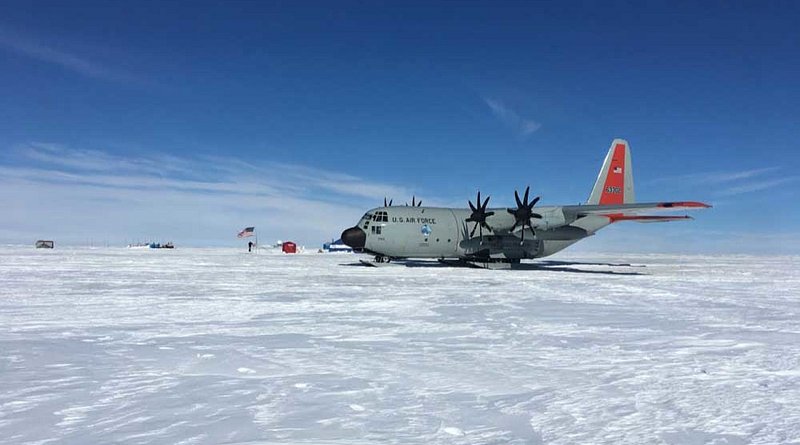 An LC-130 Hercules aircraft sits on an Arctic region skiway that was created by airmen from the 109th Airlift Wing. Photo Credit: US Air Force

The Arctic is a region where strategic trends are amplified by the effects of the changing climate and physical environment, a lead Defense Department official said on Capitol Hill, Dec. 10.

That means the Arctic is becoming more navigable over greater periods of time, resulting in increased interest and activity in the region, he said.

Countries are exploring the potential of Arctic shipping routes, and opportunities in natural resource development and tourism, he added.

Mercado made his remarks before the House Armed Services Committee, subcommittee on intelligence, emerging threats and capabilities, in a hearing on climate change in the era of strategic competition.

“The door is open to increase activity in the Arctic by the United States, our allies, partners, but also our strategic competitors,” he said.

The Arctic will continue to be characterized by extreme temperatures, vast distances, magnetic anomalies — which complicates communications — and market seasonal variations, Mercado said.

“Together, these conditions form a harsh and demanding operating environment for all, including the U.S. joint force,” he said.

The DOD 2019 Arctic Strategy takes into account these environmental conditions as part of the department’s strategic approach to the region, Mercado emphasized.

“The department’s desired end state for the Arctic is a secure and stable region, where U.S. national interests are safeguarded, the U.S. homeland is defended and nations work cooperatively to address challenges,” he pointed out.

The immediate prospect of conflict in the Arctic continues to be low, but DOD maintains a clear-eyed approach to its competitors’ activities and their implications for U.S. interests, Mercado added.

In making these assessments, we begin with a fundamental difference between Russia and China, he noted.

Russia is an Arctic nation, China is not, Mercado added.

“Russia’s military investments in the Arctic contribute to its territorial defense, but may have implications for access to the region,” he pointed out, adding that China is seeking a role in the Arctic to include governance, despite its having no territorial claims in the region.

“There is a risk that to further its ambitions, China may repeat predatory economic behavior in the Arctic that it has exhibited in other regions,” Mercado warned.

The DOD Arctic Strategy establishes three defense objectives derived from the National Defense Strategy that guide the department’s approach to addressing competition in the Arctic — and defending the homeland is No. 1 — in addition to competing when necessary to maintain favorable regional balances of power, and ensuring common domains remain free and open, he said.

The United States’ network of allies and partners is a key strategic advantage for the nation in the Arctic, Mercado said.

“They are the cornerstone of the department’s strategic approach. Six of seven other Arctic nations are either NATO allies or NATO-enhanced opportunity partners,” he noted.

By Yossi Mekelberg* Cynics would argue that if a political entity can survive for three years without a government, as