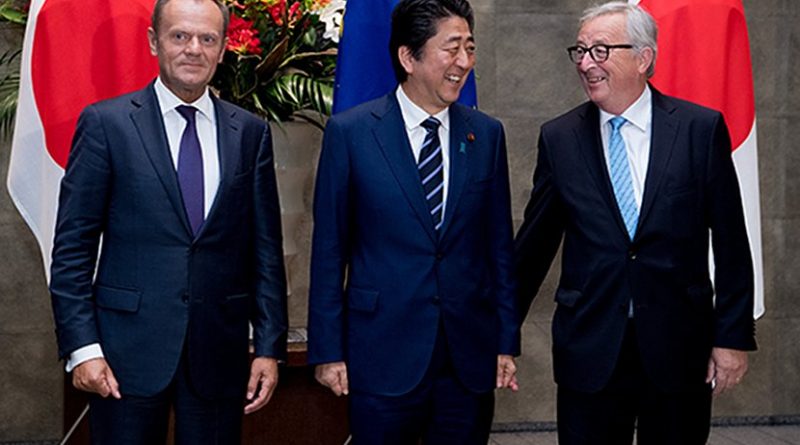 A Partnership on Sustainable Connectivity and Quality Infrastructure was signed between the EU and Japan in September 2019. The Partnership covers sectors from transport to digital industries. It calls for ‘transparent procurement practises, the ensuring of debt sustainability and the high standards of economic, fiscal, financial, social and environmental sustainability’. Coupled with ODA (Official Development Assistance), which would be necessary for its implementation in the developing world, the Partnership could make a real difference.

The fact that the two managed to conclude a free-trade agreement covering 30% of the world’s GDP is partly a result of the changing power structure in the 21st century. This is causing uncertainty and, in some places, also unrest, not only in developing but also in developed countries. With the decision to go ahead with Brexit and the refugee crises in Europe, the liberal world order is being questioned. The Russian invasion of Ukraine has led to greater concerns regarding security. In Asia the rise of a more assertive China is also causing security concerns. In the US, Donald Trump and his ‘America first’ policy is further questioning the liberal world order. He started off with scrapping two free-trade agreements that had been under negotiation for many years.1 The two main US liberal partners (the EU and Japan) were made aware that multilateralism was no longer a priority for the US, which would soon break the Iran nuclear deal as well as the Paris climate agreement. In fact, they are now the two main powers left to defend the liberal world order.

The EPA is a detailed agreement that provides the basis for streamlining conditions for a fair and free trade policy and signals a commitment to that purpose at the same time as it strikes a blow against protectionism; the SPA, on the other hand, does not have a firm roadmap. It is underpinned by shared values and principles of democracy, the rule of law, human rights and fundamental freedoms. Based on the principles of mutual respect, equal partnership and respect for international law, Japan and the EU and its Member States will cooperate and coordinate policies in more than 40 different areas.

A Joint Committee has been assigned to supervise its implementation. At its first meeting, in Tokyo in March 2019, security, climate change, nuclear disarmament and infrastructure development were all pointed out as priority areas. These are all very broad fields where visible results will be difficult to achieve. Development cooperation, a field in which both Japan and EU excel, can be a strong tool to achieve results in all of these and would surely also be appreciated by developing countries.

Moving from the Millennium Development Goals (MDGs) to the Sustainable Development Goals (SDGS) in 2015 has changed the perception of what development cooperation should look like. More than 10 times as much money will be needed to achieve the SDGs. The share of Official Development Assistance (government assistance) in both official and private flows is shrinking. Strategic assistance to get private institutions and businesses involved is being encouraged. Development cooperation is no longer only about poverty reduction but also about the right to a decent job and economic growth, clean water, affordable and clean energy and the development of industry, innovation and infrastructure.

It is in this light that the EU-Japan Partnership on Sustainable Connectivity and Quality Infrastructure should be seen. It is one of the first concrete steps within the SPA. It calls for ‘transparent procurement practises, the ensuring of debt sustainability and the high standards of economic, fiscal, financial, social and environmental sustainability’.

While the agreement does not mention China by name, the Partnership is clearly crafted with Beijing’s Belt and Road Initiative in mind. This giant project has been endorsed by more than 140 countries, including half of the 27 EU member states. The project, however, faces criticism for falling short on environmental standards and leaving some participating countries heavily in debt. The need for infrastructure, in Asia in particular, is huge and financial help to develop the project is estimated at US$26 trillion up to 2030. The Chinese contribution is welcome but there is a fear among traditional donors that the process will not be carried out fairly and that transparency is seriously lacking.

Development cooperation is coupled with power and the possibility of exerting influence. Thus, there is a political motivation for the EU and Japan to cooperate. They both want to promote a liberal world order built on values such as transparency, sustainability, democracy and human rights. There are also security reasons, since they do not want an overly powerful China to ‘dominate’ world affairs.

The SPA is also part of a wider push by the EU to transform itself from ‘payer to player’ where trade, aid and investments should be used together to achieve strategic foreign policy goals. It is aligned with other EU plans to deploy €60 billion to encourage investment many times that value to improve the ties between Europe and Asia. It also matches Prime Minister Abe’s call for a ‘proactive contribution to peace’. Further, the Japan International Cooperation Agency (JICA) and the European Investment Bank (EIB) have also signed a memorandum of understanding to enhance their cooperation and promote investment in developing countries.

The question is now how to move on from a broad political statement to the implementation stage. The highest political-level meeting between the EU and Japan is the yearly meeting of the President of the EU Commission and the Japanese Prime Minister. Below this, a high-level Joint Committee has been appointed to be in charge of the implementation of the SPA. A second meeting of this Joint Committee was held in Brussels on 31 January 2020. At that meeting, Japan and the EU agreed to continue improving their cooperation in such fields as sustainable connectivity, quality infrastructure and global issues, including the environment and security policy in accordance with the SPA.

A suggestion for how to move forwards would be for the Joint Committee to set up a number of subcommittees in the field of development. These should consist of government officials as well as practitioners dealing with ODA, representatives from private business, civil society and scholars from both developed and developing countries. The subcommittees should be assigned limited areas in which they should come up with specific suggestions for development cooperation projects. These could be on the environment, security or infrastructure. Some of them should then be chosen for implementation. Information about the projects selected should be widely advertised through the social media and different campaigns to showcase Japanese and EU actions. Success will depend on how broadminded the people involved are, as well as on the will of politicians to implement unconventional ideas.

The world is changing at a rapid pace and development cooperation must change with it to remain relevant. The EU and Japan have the knowledge, education and experience, as well as economic resources, to be at centre stage in this process and make a strong contribution to a sustainable world order.

*About the author: Marie Söderberg, The European Institute of Japanese Studies

1 The TPP (Transpacific Partnership agreement) with Japan and other Pacific nations as well as the Transatlantic Trade and Investment Partnership (TTIP) with Europe.