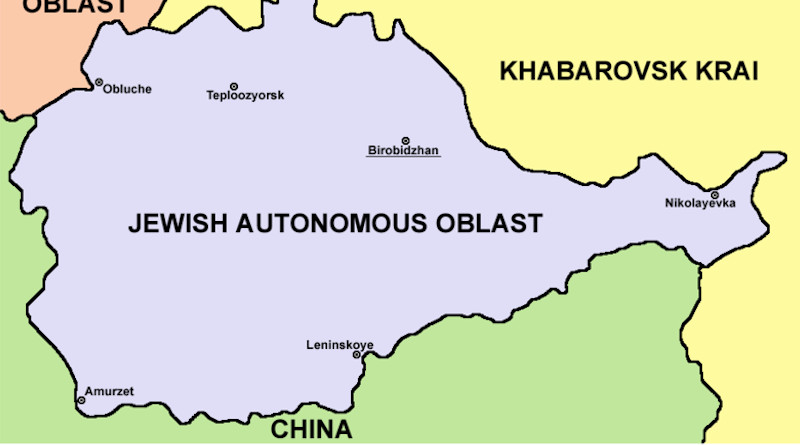 The Jewish Autonomous Oblast in Russia with the administrative center of Birobidzhan underlined. Credit: Wikipedia Commons

At the end of January, Yury Avdeyev, a specialist on regional development at the Institute of Geography in Vladivostok, said that the Jewish Autonomous Oblast should be reunited with Khabarovsk Kray to give it a chance to escape its current depressed situation (nabat.news/2019/01/14/ekspert-iz-primorya-vyskazalsya-za-prisoedinenie-eao-k-habarovskomu-krayu-god-85-letnego-yubileya-eao-nachalsya/).

That idea now has been picked up by Anton Krivenyuk of Sovershenno-Sekretno who suggests such a possibility is especially real because the population of the Jewish AO is so overwhelmingly ethnic Russian – only one percent of its people are Jews – and thus amalgamation would play well with the Kremlin’s “Russian world” rhetoric (sovsekretno.ru/articles/udalenie-subektnosti-/).

It would also be consistent with the arguments of Moscow officials that regions must cooperate to boost economic growth and equalization and would potentially open the way to a new round of regional amalgamation, a Putin program that has long been on hold given non-Russian resistance and the war in Ukraine (windowoneurasia2.blogspot.com/2019/03/five-ways-non-russian-republics-can.html).

According to Krivenyuk, “one of the important reforms of the near future will be the unification and enlargement of the regions” with the continued existence of the smaller ones to provide additional support for the larger ones. And this process will be pursued to give Moscow greater control over resources and to punish those regions that have resisted the center.

He suggests that “the Jewish Autonomous Oblast is first in line for amalgamation.” It is large but sparsely populated, poor, and its titular nationality is small while the ethnic Russians are vastly more numerous.  But if it is to be absorbed by a neighboring Russian region, the constitution will have to be changed as the Jewish AO is listed in it.

And any move in that direction would face opposition: Mikhail Chernov, head of the Foundation for the Support and Development of Jewish Culture, says that “the population of the Jewish AO is on the whole categorically against this idea.” Amalgamation has not helped other small areas, and it would not help the Jewish AO which would remain a backwater.

Another obstacle is that the governor of Khabarovsk Kray, Sergey Furgad, is no friend of the Kremlin’s. He almost certainly would have to be ousted before this combination could be achieved – but it is of course possible that amalgamation would be a useful tool to achieve exactly that outcome.

Other candidates for amalgamation are Krasnoyarsk Kray and Khakassia. In the latter, only 11 percent of the population are Khakass. And Krasnoyarsk governor Aleksandr Uss has been pushing the idea of “a Yenisey Siberia” which which include these two subjects plus the Republic of Tuva.

There is also talk about combining Leningrad Oblast or portions of it with St. Petersburg, although how this would improve the economic situation in either is unclear.

The most interesting aspect of Krivenyuk’s article is what it does not include. There is no mention of amalgamating republics in the Middle Volga or North Caucasus with larger neighboring Russian regions. Moscow may now recognize that the  negative reactions any such move would provoke would be a problem no one at the center now wants to deal with.

One thought on “Will Jewish AO Be Absorbed By Khabarovsk Kray As Start Of New Amalgamation Effort? – OpEd”