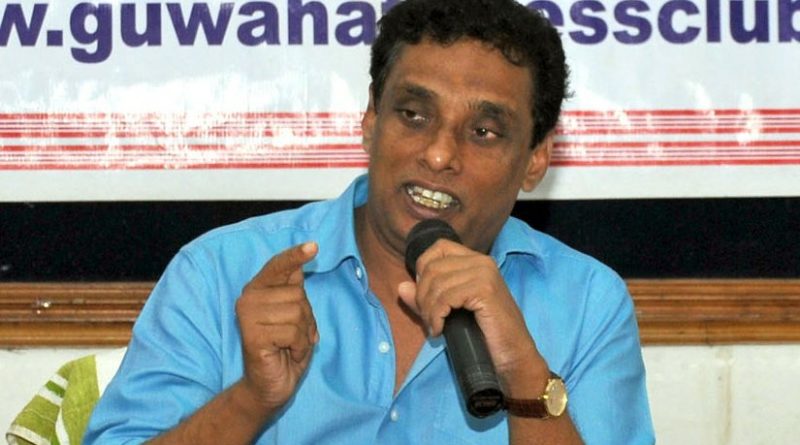 Prasanna Vithanage, while receiving the third Biswaratna Dr Bhupen Hazarika International Solidarity Award on April 10, 2017 in Guwahati, echoed the gesture with the greetings of the spring festival celebrated in his island nation on the same occasion.

The award, launched in 2013 by Assam’s highest literary forum ASS with supports from Numaligarh Refinery Limited to commemorate Bhupen-da as an international icon, was first offered to Bangladeshi scholar and dance exponent Lubna Marium. The second award was conferred on eminent Malayalam filmmaker Adoor Gopalakrishnan. Presented biannually, the award carries a trophy, a citation, cash price and other traditional gift items.

In his acceptance speech, the Sri Lankan film director echoed similar concerns of regional film makers in India for their survival.

However, Prasanna, whose movies have been screened in various international film festivals, pointed out that there is still a sizable group of serious film-goers in Sri Lanka who support alternate film making. Nevertheless, he agreed that Bollywood movies enjoy an important market share in Sri Lanka.

According to Prasanna, the simplicity conveyed with creative ardors by the filmmakers inspired him to try his hands with the art of film-making. He specially mentioned Jahnu’s award winning Assamese movie ‘Halodhiya Choraye Baodhan Khay’ (The Catastrophe) that influenced his creative journey to a great extent.

Born at Panadura, an outskirt locality of Colombo in 1962, Prasanna started working in theaters and soon emerged as a sensitive visual translator of inner conflicts carried by ordinary people along with their journey for individual freedom. He has received recognition from the international audience for ‘Sisila Gini Gani’ (Ice of Fire), ‘Anantha Rathriya’ (The Dark Night of Soul), ‘Akasa Kusum’ (Flowers of the Sky), ‘Pura Handa Kaluwara’ (The Death on a Full Moon Day), ‘Ira Madiyama’ (August Sun), ‘Oba Nathuwa Oba Ekka’ (With You, Without You), ‘Usawiya Nihandai’ (Silence in the Courts), etc.

The feature film titled ‘With You, Without You’ is the third part of a war trilogy — after ‘The Death on a Full Moon Day’ and ‘August Sun’ —  and deals with the human cost of Colombo’s three decade long war against the separatist Liberation Tigers of Tamil Eelam (LTTE). For some time, the film was banned from public screenings in Sri Lanka.

Prasanna also attended in an interactive session titled Guest of the Month at Guwahati Press Club with the local scribes. He bared his heart to the participants expressing his concern to the crisis of small-time film makers based in different parts of the globe, but also conveyed optimism over digital screening of quality films for the benefit of film appreciators.

The Sinhalese director stated that the present scenario of Sri Lankan film industry is bleak, but the new technology can be used for its sustained growth. He argued that the screening of regional movies (inclusive of Sinhalese films) with multiple sub-titles through various alternate media outlets would help the industry to survive for a better future.

Talking about the strong presence of female characters in his movies, the energetic director revealed that he has succeeded because of his mother’s influence over him. Prasanna termed his mother as a strong individual and admitted that her influence remains a real strength for him in all times of crisis. For him a mother is always an unparalleled symbol of love, affection, care and simplicity.

Prasanna also made an interesting revelation that unlike Indians — who are divergent, but united in oneness — the Lankans are yet to nurture the spirit of nationalism. He admitted that the Lankan society remains ethnically divided even after the end of Tamil uprising that turned into terrorism in the northern part of the country.

He also disclosed that there was no freedom of movement against the British colonial rule in Sri Lanka, unlike India. As the British authority was forced to leave India, the Lankan people got the benefit of circumstance and subsequently the island nation emerged as a sovereign country.