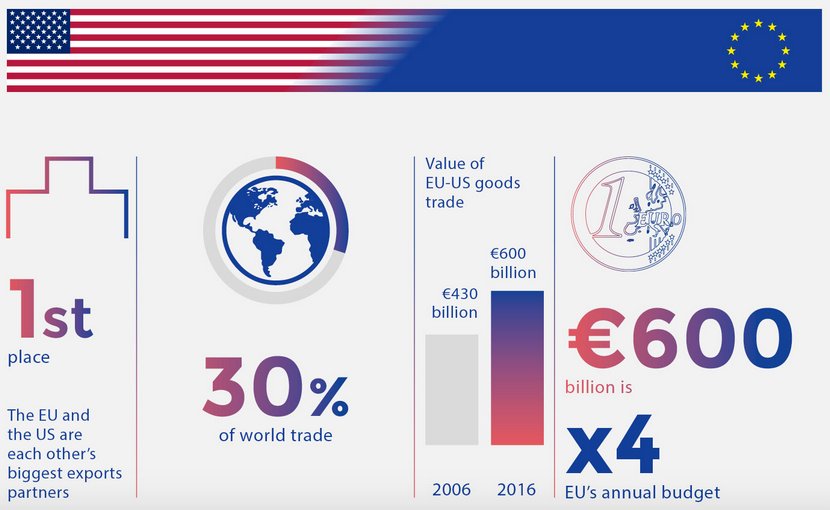 The European Commission said it welcomes Monday’s decision by the EU Council to adopt the negotiating directives for trade talks with the United States, thus continuing to deliver on the implementation of the Joint Statement agreed by Presidents Juncker and Trump in July 2018.

European Union Member States gave the Commission the green light to start formal negotiations with the U.S. on two agreements, one on conformity assessment, and the other on eliminating tariffs on industrial products. This is just three months after the European Commission had put forward the mandates and in line with the conclusions of the March European Council, during which EU leaders called for a “rapid implementation of all elements of the U.S.-EU Joint Statement of 25 July 2018”.

The President of the European Commission, Jean-Claude Juncker said: “The European Union is delivering on what President Trump and I have agreed on 25 July 2018. We want a win-win situation on trade, beneficial for both the EU and the U.S. Notably we want to slash tariffs on industrial products as this could lead to an additional increase in EU and U.S. exports worth around €26 billion. The European Union and the United States have one of the most important economic relationships in the world. We want to further strengthen trade between us based on the positive spirit of last July.”

EU Trade Commissioner Cecilia Malmström said: “This is a welcome decision that will help ease trade tensions. We are now ready to start formal talks for these two targeted agreements that will bring tangible benefits for people and economies on both sides of the Atlantic. I am convinced that breaking down barriers to trade between us can be win-win.”

The directives for the negotiations cover two potential agreements with the U.S.:

In line with the directives agreed by EU governments, the Commission will further examine the potential economic, environmental and social impacts of the agreement, taking into account the commitments of the EU in international agreements, including the Paris Agreement on climate change. This assessment, as well as the negotiating process itself, will be conducted in regular dialogue with the European Parliament, Member States, civil society and all relevant stakeholders, in line with the European Commission’s commitment to transparency. As part of its engagement for an inclusive trade policy, the Commission is currently running a public consultation on voluntary regulatory cooperation.

An economic analysis undertaken by the European Commission already indicates that an EU-U.S. agreement on eliminating tariffs on industrial goods would increase EU exports to the U.S. by 8% and U.S. exports to the EU by 9% by 2033. This corresponds to additional gains of €27 billion and €26 billion in EU and U.S. exports respectively.

As a direct result of President Juncker’s meeting with President Trump on 25 July 2018, and the Joint Statement agreed by both sides, no new tariffs were imposed, including on cars and car parts, and the EU and the U.S. are working to eliminate all existing industrial tariffs and improve cooperation.

Since July 2018, the EU and the U.S. have been working via the EU-U.S. Executive Working Group to implement the actions agreed in the Statement.

In January 2019, the Commission presented to Member States proposals for negotiating mandates to remove industrial tariffs and facilitate conformity assessments with the United States. Today’s decision finalises this approval process.

As regards other aspects of the Joint Statement, the United States is now Europe’s main soya beans supplier and will soon be able to expand its market further, following the decision by the European Commission to launch the process for authorising the use of U.S. soya beans for biofuels. The European Commission will release the latest figures tomorrow. Recent figures have also shown a steep rise in shipments of liquefied natural gas (LNG) from the U.S. in October and November 2018. The EU has also identified a number of areas where voluntary cooperation on regulatory issues with the U.S. could yield quick and substantial results.