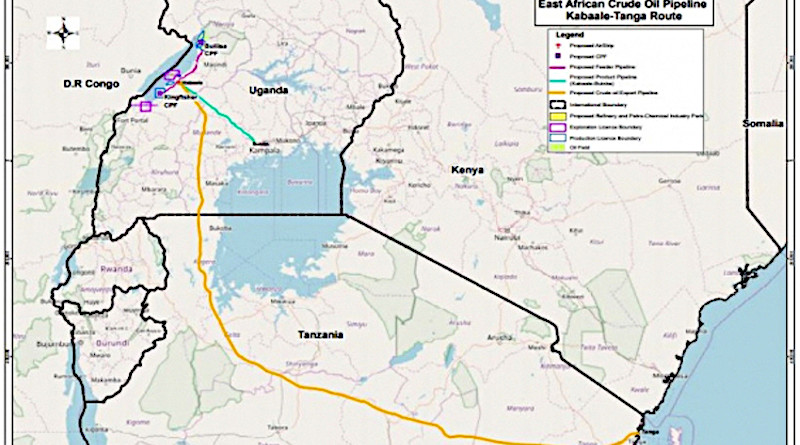 A climate justice movement of over 100 major organizations in Africa and abroad has joined hands to press the African Development Bank (AfDB) to drop its support of an “exceptionally high-risk project” that threatens the livelihoods of millions of people in East Africa.

In a letter to the Bank President AfDB president Akinwumi Adesina, leaders of environmental and social groups from Uganda, the Democratic Republic of Congo, Kenya, and South Africa, among others, warned that the East African Crude Oil Pipeline (EACOP) posed global climate risks and environmental damage including harm to freshwater supplies and biodiversity in the region.

The 1,445-kilometre pipeline from Hoima, Uganda to the port of Tanga in Tanzania is set to be the longest heated pipeline in the world, carrying an estimated 216,000 barrels of crude oil per day through heavily populated districts in both countries.

Construction of the pipeline threatens to enable the opening up of critical ecosystems including Murchison Falls National Park to oil extraction. In addition, it is expected to cause large-scale displacement of communities and pose grave risks to protected environments, water sources and wetlands in both Uganda and Tanzania.

The pipeline was initially being sponsored by UK’s Tullow, Total of France, and China National Offshore Oil Corporation Ltd. But work on the pipeline has been suspended since August 2019, when Tullow’s efforts to sell its stake to the other project sponsors stalled.

By then, preparations in both countries were already underway following the signing of an initial inter-governmental agreement between Uganda and Tanzania securing the pipeline route in May 2017.

Further, the project is being developed in a political climate in which human rights defenders and journalists expressing criticism of the project and associated facilities face harassment and threats of retaliation.

The major risk is fossil fuel expansion and the resulting emissions that could harm the surrounding farming communities in Tanzania and Uganda, the group charged in an open letter – dated March 20, 2020 – to Bank President Adesina.

Corruption and human-rights violations from large-scale land acquisition and resettlement, and threats to livelihoods, biodiversity and natural habitats along the pipeline route are other factors, the group said.

“We do not consider that these concerns can be adequately mitigated. As such we urge the bank not to proceed with financing this project, but to seek opportunities instead to finance genuine renewable infrastructure to help meet the region’s energy needs in a clean and rights-compatible manner in the decades to come,” the letter stated.

They requested a response from the AfDB President by April 10: So far there has been none.

“The bank should be seeking opportunities to fund renewables that can contribute to the region’s energy needs in a clean and rights-compatible manner,” said Diana Nabiruma of the Africa Institute for Energy Governance (AFIEGO), based in Uganda.

“… The last thing that Africa’s premier development bank should be considering is the financing of a massive oil pipeline,” said Eugenie Cha, Africa Program Director for Inclusive Development International.

“This project is not only wholly incompatible with the African Development Bank’s climate commitments, but it also poses unacceptable risks to local communities and ecosystems. We in the Democratic Republic of Congo are also concerned that this project could potentially endanger vitally important and biodiverse ecosystems, such as Virunga National Park,” said Bantu Lukambo of the DRC-based environmental protection group.

Meanwhile, local officials in Uganda insist the pipeline project is not dead and still plan to start construction before 2021. As recently as August, Standard Bank said the project has “lots of interest” and that finding additional financing would “not be a problem”.

The next meeting of the AfDB Boards of Governors is tentatively scheduled for May 26-29 in Abidjan, the Ivory Coast.