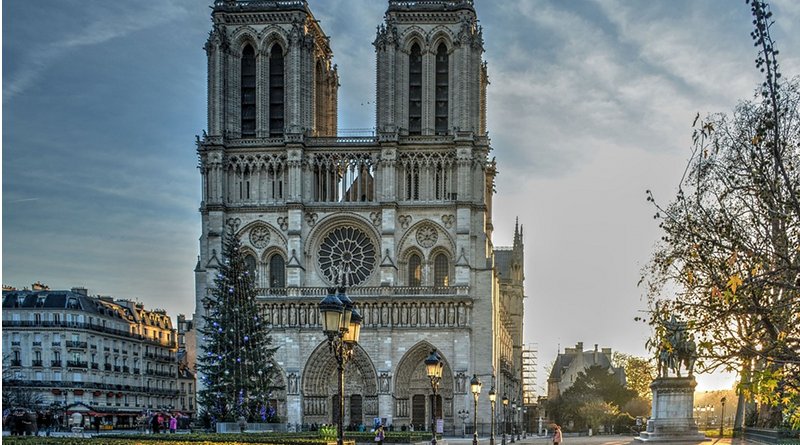 For Fr. Pierre Amar, Notre-Dame de Paris has always been a masterpiece, “the very example of supreme beauty,” but now the Marian cathedral is also “a great burnt victim.”

One year after the fire destroyed much of the cathedral’s roof and spire, the French priest shared what the cathedral of Paris has meant and continues to mean for Catholics in France as the country again faces a crisis.

“Notre-Dame is a great lady of history. She has lived through centuries, eras, perils, and war. She has sustained the nation in its darkest hours,” Fr. Amar told CNA.

“When we saw the flames assailing the framework, we all believed that our entire history was about to give way. If there was such a shock, it was because our roots were attacked,” the French priest said.

Notre-Dame de Paris has touched and guarded souls as 850 years of prayers, petitions, and praise were hidden within its walls, he said.

“The cathedral is above all the place where Mass is celebrated,” he reflected.

Archbishop Michel Aupetit of Paris venerated the cathedral’s relic of Christ’s crown of thorns inside the damaged cathedral on Good Friday.

The archbishop prayed: “Lord Jesus, a year ago, this cathedral in which we are, was burning, causing astonishment and a worldwide impetus for it to be rebuilt, restored. Today we are in this half-collapsed cathedral to say that life is still there.”

“The whole world is struck down by a pandemic that spreads death and paralyzes us. This crown of thorns was saved on the evening of the fire by the firefighters. It is the sign of what you suffered from the derision of men. But it is also the magnificent sign that tells us that you are joining us at the height of our suffering, that we are not alone and that you are with us always,” Aupetit said.

Notre-Dame caught fire April 15, 2019, Holy Monday, destroying the building’s spire and most of the roof. The stone vaults survived mostly intact, as did most of the cathedral’s artwork and relics.

The removal of the melted scaffolding on the cathedral’s roof scheduled to begin March 23 cannot take place under the country’s coronavirus measures, according to the French daily Libération.

The scaffolding, which was present on the building prior to the fire due to restoration work, fused together during the blaze. There are an estimated 551 tons of metal still on top of the cathedral.

After watching the cathedral burn last year, Fr. Amar recalled that the Bishop of Nanterre remarked: “And suddenly France remembered that she was Christian.”

“Why did the whole world cry [for] Notre-Dame?” the priest asked. “Notre-Dame transmits to us this feeling of the absolute; she gives us a foretaste of eternity.”

“To name all the authors and artists she has inspired, we would have the time to rebuild the framework on our own! It is this transcendence that inspires. It is a direct link with the Creator,” he said.

The priest said that Victor Hugo’s description of Notre-Dame’s 16 bells, including 2 bourdon bells, provides a sense of their power: “At last the great flight began; the whole earth was shaking: frames, lead, ashlar stones all rumbled at once.”

Notre-Dame’s bells include a 13-ton bourdon bell in the south tower, which was named Jacqueline in 1400 after the wife of its donor. When it was recast in 1686, the bell was renamed “Emmanuel Louise Therese” by Louis XIV.

“Did you know that in the 12th century, 12 strong men were requisitioned to ring ‘Jacqueline’?” Amar asked, noting that he thought this was like the “12 apostles to call to prayer.”

“In front of the cathedrals, the crowds stop in silence, unable to understand the splendour of these architectural immensities, admiring nevertheless instinctively,” French sculptor Auguste Rodin wrote, Amar said, noting that Notre-Dame de Paris is not the only cathedral in France to play this role.

“How can we not mention Reims, sanctuary of the kings of France, or Chartres, land of pilgrimages!” he said. “But Notre-Dame has the seniority: with its 850 years of history, she is among the first gothic cathedrals of its time.”

“For years, Notre-Dame was there, in front of us, and we only took the time to contemplate her at the moment the arrow fell! Why does it always take tragic circumstances to awaken the world?” he asked.