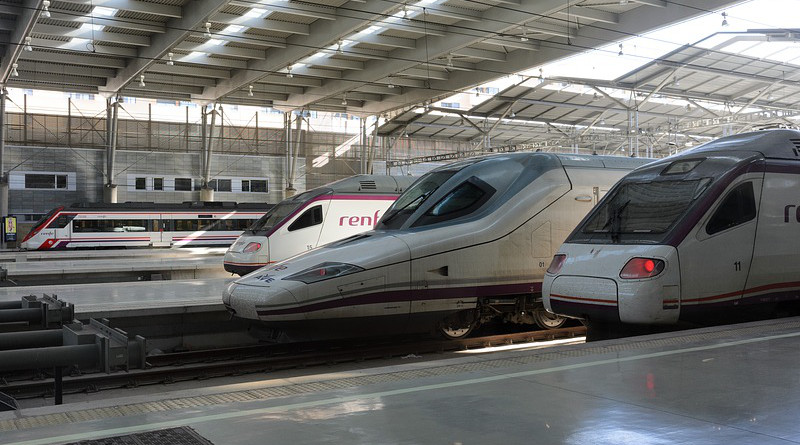 (EurActiv) — Europe’s demand for rail travel will increase over the next decade, according to new analysis that cites the public’s new-found appreciation for cleaner air and climate issues as a result of the coronavirus outbreak. Airlines are predicted to be the main loser of the train resurgence.

Coronavirus lockdown measures have curtailed rail, maritime, road and air travel across Europe and have plunged airlines in particular into a fight for survival.

Empty skies and highways have also resulted in cleaner air, while a debate about whether governments should use public money to bail out the most polluting transport types is ongoing.

According to new analysis by UBS Research, that shift in perceptions will be a boon to Europe’s high-speed rail market, which is on track to grow 10% every year this decade.

The Swiss firm predicts that the sector’s market opportunity will grow to €11 billion by 2022, as the growth in demand will need more rolling stock and sweeping changes to infrastructure like signalling or even new track.

“In our view, and underpinned by lower financing costs, the political support for rail infrastructure investment is growing significantly,” the UBS analysis insists.

Public support is also on the up. Rail operators have started reintroducing night-train services in response to demand, while tolerance for longer trips is also reportedly growing.

Business travellers would put up with a journey of four hours, the UBS data says, while leisure travellers could tolerate six. The analysis cites the London-Paris route as a prime example of where rail’s city-centre departure and arrival points, and relatively short waiting times, allow it to triumph over airlines.

The European Commission said in March that 2021 should be “the European Year of Rail” as part of the EU’s new green agenda, citing the transport mode’s success in reducing emissions while preserving growth.

“There’s no doubt that railway transport means huge benefits in most areas: sustainability, safety, even speed, once it’s organised and engineered according to 21st-century principles,” said EU transport Commissioner Adina Vălean at the launch of the initiative.

Significant changes are on the horizon. By the end of 2020, France and Spain’s state-owned rail firms – SNCF and Renfe – will lose their long-held monopolies over domestic routes, as market liberalisation starts to take a firmer hold.

According to the UBS report, “liberalisation should improve frequency and affordability. 2019 and 2020 mark the inflection point for the industry.”

France and Spain, along with Italy and Germany, could add up to 800 new high-speed trains during the next decade, which could cost up to €60bn. The Bundesrepublik alone will invest more than €80bn in its network over the coming ten years.

SNCF intends to roll out brand-new versions of its TGV high-speed staple in 2023, with double-decker carriages that can carry more people. The cost per unit of the new model has also decreased, meaning its plans for an eventual 100-strong fleet are within reach.

Commissioner Vălean told EURACTIV during an interview that she would still like to see EU governments implementing the rules of the Fourth Railway Package, “which is not yet the case and which I was very keen to pursue this year.”

The transport chief also said that she would like to see the next long-term budget – the MFF – “used to put a focus on rail” by boosting investment instruments like the Connecting Europe Facility.

Taking on the airlines

High-speed services have scored notable wins against short-haul aviation in recent years. Eurostar’s cross-Channel route has more than halved air travel demand between London and Paris, the firm announced in 2019.

A new return service between the British capital and Amsterdam – due to launch this month but facing a de facto delay due to the pandemic – aims to do the same, as it falls within the four-hour window that analysts say favours train travel.

SNCF also teamed up with its Italian and Swiss counterparts last year in order to up their game against short-haul flights in and out of Switzerland.

The UBS data suggests that if its high-speed predictions pan out, global air traffic growth over the next decade will fall to just 4.6% per year, compared with the 5.1% increase that was on the cards before the COVID-19 outbreak.

Within Europe, growth could stagnate or even fall. The study highlights the impact rail has already had on the London-Paris, Madrid-Barcelona and Munich-Berlin routes, as well as planned routes like Paris-Toulouse and Berlin-Cologne.

A wider and more efficient rail network might then push airlines into focusing more on long-haul services and short-haul flights that fall outside the four-hour rail window or serve areas not accessible to high-speed trains.

The industry might then have a better shot at meeting self-imposed emissions-cutting targets that are currently out of reach.

In 2010, UN aviation agency ICAO agreed to annual 2% fuel efficiency improvements and carbon-neutral growth as of 2020. According to industry figures, gains are more in the region of 0.8% and the latest estimates suggest that will only increase to 1.3% this decade.

Airlines say that route optimisation – managed in Europe by the Single European Sky system – is crucial to their efficiency drive, while increased usage of alternative fuels could also yield further improvements.

Further growth will have to be mopped up by ICAO’s offsetting scheme, known as CORSIA, which is due to start a pilot phase next year. Companies will have to buy into renewable energy schemes and other projects that bring down emissions if they exceed their targets.

CORSIA intends to use 2019-2020 as the baseline for measuring growth but due to the huge fall-off in traffic predicted for the rest of this year, the industry is calling for just 2019 to be used instead.

If 2020 is included in the calculations then the gap between business-as-usual and growth will be higher and airlines will have to pay out more to keep their emissions at a neutral level. ICAO is scheduled to meet in the summer, when the issue will be discussed.