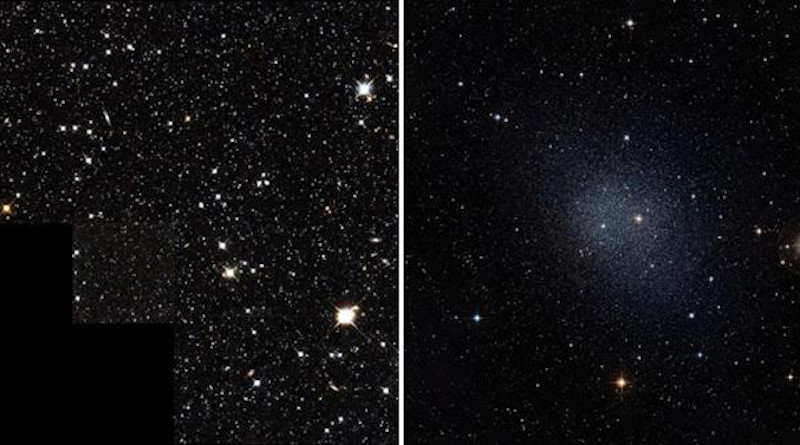 A research team led by physicists at the University of California, Riverside, reports tiny satellite galaxies of the Milky Way can be used to test fundamental properties of “dark matter” — nonluminous material thought to constitute 85% of matter in the universe.

The prevailing dark matter theory, called Cold Dark Matter, or CDM, explains much of the universe, including how structures emerge in it. But a long-standing challenge for CDM has been to explain the diverse dark matter distributions in galaxies.

The researchers, led by UC Riverside’s Hai-Bo Yu and Laura V. Sales, studied the evolution of SIDM “subhalos” in the Milky Way “tidal field” — the gradient in the gravitational field of the Milky Way that a satellite galaxy feels in the form of a tidal force. Subhalos are dark matter clumps that host the satellite galaxies.

“We found SIDM can produce diverse dark matter distributions in the halos of Draco and Fornax, in agreement with observations,” said Yu, an associate professor of physics and astronomy and a theoretical physicist with expertise in particle properties of dark matter. “In SIDM, the interaction between the subhalos and the Milky Way’s tides leads to more diverse dark matter distributions in the inner regions of subhalos, compared to their CDM counterparts.”

“Our challenge was to understand the origin of Draco and Fornax’s diverse dark matter distributions in light of these newly measured orbital trajectories,” Yu said. “We found SIDM can provide an explanation after taking into both tidal effects and dark matter self-interactions.”

Dark matter’s nature remains largely unknown. Unlike normal matter, it does not absorb, reflect, or emit light, making it difficult to detect. Identifying the nature of dark matter is a central task in particle physics and astrophysics.

“Our work shows satellite galaxies of the Milky Way may provide important tests of different dark matter theories,” said Sales, an assistant professor of physics and astronomy and an astrophysicist with expertise in numerical simulations of galaxy formation. “We show the interplay between dark matter self-interactions and tidal interactions can produce novel signatures in SIDM that are not expected in the prevailing CDM theory.”

In their work, the researchers mainly used numerical simulations, called “N-body simulations,” and obtained valuable intuition through analytical modeling before running their simulations.

“Our simulations reveal novel dynamics when an SIDM subhalo evolves in the tidal field,” said Omid Sameie, a former UCR graduate student who worked with Yu and Sales and is now a postdoctoral researcher at the University of Texas at Austin working on numerical simulations of galaxy formation. “It was thought observations of Draco were inconsistent with SIDM predictions. But we found a subhalo in SIDM can produce a high dark matter density to explain Draco.”

Sales explained SIDM predicts a unique phenomenon named “core collapse.” In certain circumstances, the inner part of the halo collapses under the influence of gravity and produces a high density. This is contrary to the usual expectation that dark matter self-interactions lead to a low-density halo. Sales said the team’s simulations identify conditions for the core collapse to occur in subhalos.

“To explain Draco’s high dark matter density, its initial halo concentration needs to be high,” she said. “More dark matter mass needs to be distributed in the inner halo. While this is true for both CDM and SIDM, for SIDM the core-collapse phenomenon can only occur if the concentration is high so that the collapse timescale is less than the age of the universe. On the other hand, Fornax has a low-concentrated subhalo, and hence its density remains low.”

The researchers stressed their current work mainly focuses on SIDM and does not make a critical assessment on how well CDM can explain both Draco and Fornax.

After the team used numerical simulations to properly take into account the dynamical interplay between dark matter self-interactions and tidal interactions, the researchers observed a striking result.

“The central dark matter of an SIDM subhalo could be increasing, contrary to usual expectations,” Sameie said. “Importantly, our simulations identify conditions for this phenomenon to occur in SIDM, and we show it can explain observations of Draco.”

The research team plans to extend the study to other satellite galaxies, including ultrafaint galaxies.