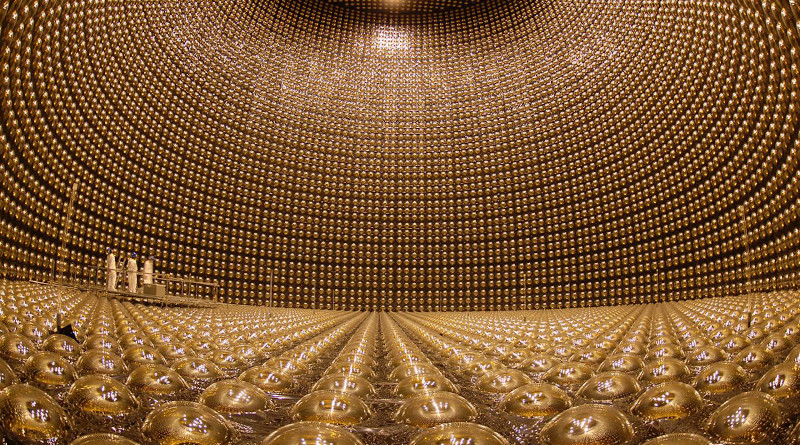 Lancaster physicists working on the T2K major international experiment in Japan are closing in on the mystery of why there is so much matter in the Universe, and so little antimatter.

Tokai to Kamioka (T2K) researchers have revealed in the journal Nature that almost half of the possible parameter values that determine matter-antimatter asymmetry in the Universe have been ruled out.

Dr Laura Kormos, Senior Lecturer in Physics at Lancaster University, head of Lancaster’s neutrino physics group and researcher at T2K, said: “Our data continue to suggest that Nature prefers almost the maximal value of asymmetry for this process. It would be just like Mother Nature to have these seemingly insignificant, difficult to study, tiny particles be the driver for the existence of the universe.”

The T2K experiment studies neutrinos, one of the fundamental particles that make up the Universe and one of the the least well understood. Yet every second trillions of neutrinos from the sun pass through your body. These tiny particles, produced copiously within the sun and other stars, come in three varieties or flavours, and may spontaneously change, or oscillate, from one to another.

Each flavour of neutrino has an associated antineutrino. If flavour-changing, or oscillations, are different for neutrinos and antineutrinos, it could help to explain the observed dominance of matter over antimatter in our Universe, a question that has puzzled scientists for a century.

For most phenomena, the laws of physics provide a symmetric description of the behaviour of matter and antimatter. However, this symmetry must have been broken soon after the Big Bang in order to explain the observation of the Universe, which is composed of matter with little antimatter.

A necessary condition is the violation of the so-called Charge-Parity (CP) symmetry. Until now, there has not been enough observed CP symmetry violation to explain the existence of our Universe.

T2K is searching for a new source of CP symmetry violation in neutrino oscillations that would manifest itself as a difference in the measured oscillation probability for neutrinos and antineutrinos.

The parameter governing the matter/antimatter symmetry breaking in neutrino oscillation, called the δcp phase, can take a value from -180º to 180º. For the first time, T2K has disfavoured almost half of the possible values at the 99.7% (3σ) confidence level, and is starting to reveal a basic property of neutrinos that has not been measured until now.

Dr Helen O’Keeffe, Senior Lecturer in Physics at Lancaster University and researcher at T2K, said: “This result will help shape future stages of T2K and the development of next-generation experiments. It is a very exciting outcome from many years of work.”

This is an important step on the way to knowing whether or not neutrinos and antineutrinos behave differently.