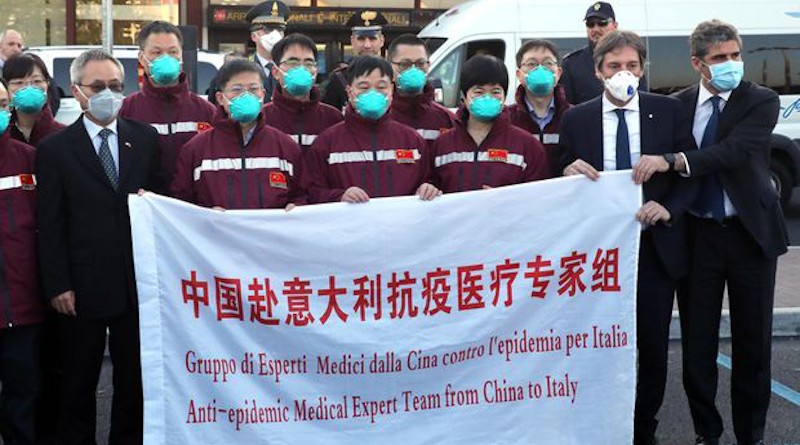 China’s worldwide assistance and medical aid to other countries to combat the coronavirus is barely covered in the corporate press. Instead, the US has ramped up its anti-China campaign to cover up its own incompetence in combating the virus. As John Pilger shows in his Obama era film The Coming War on China, this is no new campaign.

The US empire realizes that China is slowly putting the US out of business around the world. If the point comes where the US can no longer impose the dollar as the medium of international exchange – still a long way away – it would rapidly go the way of the old British empire.The  rise of China also signifies the setting of the white man’s bloody 500-year world hegemony.

China displayed before the world its effective strategy in shutting down the coronavirus. In contrast, every day Washington shows the world it is incapable of effective response and cannot control of the situation. Back on March 13, when US coronavirus deaths were just 40, Trump declared a national health emergency. Now, after eight weeks of “emergency” measures, the official US death count surpasses 87,000.

Over 50 years ago the United States would have been leading the international battle to fight the pandemic, as it had done with polio. Today, there is a vacuum that China – and Cuba – are filling. (Cuba has 2,030 medical personnel  in other countries combating COVID-19).

“This Administration’s retreat from multilateralism has been a boon for Chinese soft power,” Virginia Senator Mark Warner (D) told Newsweek. The US has “historically been a leader in responding to global emergencies, but with President Donald Trump’s retreat from the world stage, we’re seeing the Chinese government, and its proxies, fill the void,” he added.

Even CNBC reports “ ‘This is the first international crisis where China is actively taking a global leadership role and it stands in particular contrast to the US, which has disdained international cooperation and invested more political capital in criticizing China for its role in allowing the outbreak to spread,’ said analysts from the Eurasia Group in a report this week. On social and state media, China continues to promote its shipments of medical supplies to hard hit countries in Europe and Africa.”

China’s leader Xi Jinping has sought to rally the world, declaring the two most powerful weapons against the disease were solidarity and cooperation, that the virus can only be defeated when the international community fights in unity. “It is imperative for the international community to strengthen confidence, act with unity and work together in a collective response,” Xi said at the G20 summit on March 26. “We must comprehensively step up international cooperation and foster greater synergy so that humanity as one could win the battle against such a major infectious disease.” He proposed a four point program including a G20 joint action plan to lead the struggle to combat the virus and revive the world economy.

China has been supplying the world with medical supplies through donations and sales. The US, in contrast, has continued its bombings in Iraq, regime change attempts, and has blocked medical aid by the IMF and by other countries to Cuba, Venezuela and Iran. The US also capitalized on the pandemic to round up immigrants for deportation, ignoring advice from public health officials.

China Daily published an article “COVID-19 shows the demise of so-called American leadership,” which observed, “China has taken the lead to support the world during the crisis.” This was evident even in Europe as US-allied countries found themselves turning to China rather than Washington, and saw the Trump administration pirating supplies meant for other crisis-stricken countries, including Germany, Canada, Italy and France.

Cuba has also been a model of medical solidarity in face of the virus pandemic. By the end of March more than 850 Cuban health professionals have traveled abroad to help fight COVID-19. Washington has responded by retaliating, obstructing Cuba’s ability to combat the virus at home by blocking the sale of  Swiss respirators, blocking Cuba’s ability to import pharmaceutical raw materials, and even blocking a major coronavirus donation by Jack Ma from China. This led to over 25 U.S. lawmakers signing a letter to President Trump to allow Cuba access to medical supplies to fight the virus.

By early April over 100 Chinese public health experts, using their experience in Wuhan, had traveled to other countries to help in their efforts. At that time, 14 medical teams were working in 12 countries, which now include Iran, Iraq, Italy, Spain, Serbia, Cambodia, Pakistan, Venezuela, Cuba, Russia, Philippines, Nigeria and Algeria.  By mid-April, China had already sent medical donations to 140 countries. Moreover, as the US cut its funding to the World Health Organization, China compensated by donating an extra $30 million on top of a previous $20 million.

This information is rarely reported in the US corporate press, which then typically faults China for underhanded ulterior motives, for exporting substandard masks  (and then for holding up exports to meet other nation’s standards), for covering up and lying to the world about their efforts to control the virus, and so on.

Examples of China’s international solidarity and other countries’ gratitude

Chinese Donations to Canada and the US

China’s ambassador to the US, Cui Tiankai in a New York Times op-ed, China and the U.S. Must Cooperate Against Coronavirus, wrote that “Huawei donated tens of thousands of personal protective items, including masks, gloves and goggles, to New York and Washington, D.C. In total, Chinese companies have donated 1.5 million masks, 200,000 test kits, 180,000 gloves and many other medical supplies to the United States.”

China also aided Oregon, sight of the initial US outbreak. Oregon Governor Kate Brown thanked China for “The very generous donation of 50,000 much-needed masks for Oregonians,” on top of an earlier 12,000 masks.

“A few months later, we find our roles are reversed – China is now providing PPE for the US medical system, including donations from private Chinese entities. The United States has greatly appreciated the many contributions of PPE and medical supplies by Chinese companies and other organizations. These contributions have been both commercial exports and donations, both large and small, both immediate and long-term. But the American people are tremendously grateful for the support from the Chinese people, and our Mission has been touched by the many heartfelt offers to assist us in our time of need.”

China’s Aid and Donations to Europe

Not just Italy experienced the EU cold shoulder and China’s generosity. Czech President Zeman noted, “I would therefore like to thank the People’s Republic of China, which was the only country that has helped us” when they appealed for aid. Ukraine’s President Volodymyr Zelenskiy responded similarly: “We agreed with China and we are grateful to them, especially grateful to Jack Ma as he helped us by financing the $80 million.”

China’s offers of donations to the EU as a whole and to individual member states is “highly appreciated,” declared an EU spokesperson. Both China and the EU regarded China’s help as reciprocating the aid Europe sent to China during its coronavirus crisis.

In March, the Chinese government and Chinese businessman Jack Ma donated 500 ventilators, 800,000 personal protective equipment, 6 million masks, and 1.1 million test kits to Ethiopia for distribution among African countries.  Each of the 54 African states would receive at least 20,000 test kits, 100,000 masks and 1,000 protective suits.

“There is a desperate need for the medical protective equipment and gear to support public health workers in Africa and China’s donations fill a part of that need at a time when not many other people have been stepping up to help,” says Eric Olander, managing editor of The China Africa Project.

A 13-member Chinese medical team arrived in Algeria late March with $450,000 of respirators and other medical equipment, while a 15-member team came to Nigeria.

Chinese medical personnel have served in Iran, Iraq and Pakistan. Chinese experts have visited Cambodia, Laos, Malaysia, Myanmar and the Philippines, arriving with medical donations. Medical aid from both the Chinese government and businesses have  reached Indonesia, Thailand, Sri Lanka, Azerbaijan, Japan, South Korea, among other nations. Teams of experts have traveled to Asian countries for two or three weeks, visiting hospitals and laboratories, holding discussions with health professionals on measures that the host countries are taking to prevent the spread of COVID-19.

From the Southern Cone to Central America, governments have received a wide range of donations, from testing kits to ventilators. Venezuela was one of the first to receive Chinese medical supplies, which came shortly after the International Monetary Fund rejected President Maduro’s request for a $5 billion loan to strengthen his country’s fight against the virus. “We want to thank President Xi Jinping, his government and his people from the bottom of our Bolivarian heart,” said Vice-President Delcy Rodríguez.

Reuters reported, “China has won praise among Latin American governments that have accepted its help. The Chinese government said it has supplied test kits, protective suits and other forms of medical aid to more than 80 countries and international organizations.”

Not only did Cuba receive aid from the Chinese government and Jack Ma (which was reshipped through Chinese channels to avoid the US blockade), but Chinese students also delivered humanitarian aid. More than 280 Chinese students, who had previously studied in Cuba under a scholarship provided by the island authorities, collected about 140,000 yuan ($ 19,823). This money was used to purchase 420 sets of protective medical equipment as well as 38,750 medical masks.

President Xi Jinping stressed how, since the beginning of the epidemic, Cuban authorities have expressed their support for China, an attitude that demonstrates “the deep traditional friendship shared by the two countries.”

China has responded to the present US anti-China disinformation campaign by presenting a timeline of what they knew and how they responded. (here, here, here) As US coronavirus deaths continued to mount, almost one third of the world total, and as the US economy nose-dived, Trump tried to deflect blame for the disastrous handling of the coronavirus on to China. Before this, Trump had praised China’s effort.

The US has long been underfunding the community health centers and programs which could have played a valuable role in combating the spread of the virus. State public health departments have lost more than 55,000 staff since 2008. That our trust in the US government to protect our welfare is at historic lows also contributes to the ineffectual US “shelter in place” programs, which hardly compare with those in China, touched on in this short video.

From the responses to the coronavirus pandemic, the world has seen the model of public health efficiency China presented in controlling the problem at home. It has seen China’s world leadership in offering international aid and care. It has seen the abdication of leadership by the US and even its obstruction in working to find solutions. Now the US still cannot control the virus, and remains mired in economic crisis, while China is rebounding. In sum, the pandemic has made the world look at both China and the US in a new light. And it has dealt a serious blow to the US rulers’ two decade long effort to counter the rise of China.

*Stansfield Smith, Chicago ALBA Solidarity, is a long time Latin America solidarity activist, and presently puts out the AFGJ Venezuela Weekly. He is also a Senior Research Fellow at the Council on Hemispheric Affairs.