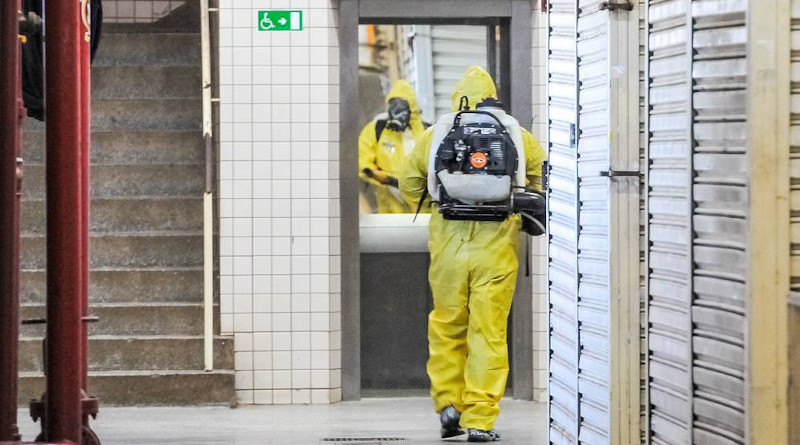 To combat the spread of the SARS-CoV-2 virus and arboviruses such as dengue, zika and chikungunya, the Federal District government in Brasilia has deployed sanitation and disinfection equipment. Copyright: Lúcio Bernardo Jr / Agência Brasília, CC-by-2.0

Simultaneous dengue and COVID-19 epidemics could lead to the collapse of Brazil’s health system, scientists warn.

The same could occur in other Latin America countries where about 500 million people are at risk of contracting dengue, according to the Pan American Health Organization (PAHO). For many of these countries, combatting the two outbreaks is an unprecedented health challenge.

Brazil is “on the eve of reaching the peak of COVID-19”, biologist Camila Lorenz, a researcher at the School of Public Health at the University of São Paulo (USP), tells SciDev.Net. She is one of the signatories of a letter in which the authors warn: “There may not be enough intensive care units to accommodate even 25 per cent of hospitalised patients with COVID-19.”

When the first SARS-CoV-2 case appeared in the city of São Paulo on 2 March, the country already faced a dengue fever epidemic. As of the beginning of May, there were more than 676,000 probable cases of dengue and 265 deaths, according to the Brazilian Ministry of Health, an increase of about 20 per cent on the same time last year.

In 2019, 2.3 million people were infected with dengue across the country.

There have been incidents of COVID-19 being mistakenly diagnosed as dengue in clinical exams, but the opposite – mild cases of dengue being registered as COVID-19 – may also be happening, Lorenz says.

This could lead to underreporting of rates of infection of both diseases and prevent correct treatment.

“Co-infections with arboviruses, like dengue, and SARS-CoV-2 have not been well studied yet. However, it is very likely that there will be cases like this in regions where there are both dengue and COVID-19 outbreaks,” she says.

Lorenz says increased testing for dengue and COVID-19 is needed, as Brazil lacks both.

“There are many rapid tests to detect dengue, but if they are applied when the individual is not yet producing antibodies, there is more chance of giving a false negative result,” says Ester Sabino, a researcher at USP Medical School.

Suspected dengue cases should undergo more rigorous laboratory testing, “but the ability to perform these tests is also limited in view of the high demand in a dengue fever outbreak”, Sabino explains.

Dengue fever is a concern across Latin America and the Caribbean. In 2019, the region recorded more than 3 million confirmed cases of the disease, according to PAHO, while in January some countries reported increases of up to three times the number of dengue cases compared with the same time last year.

Alexander Precioso, director of the Centre for Clinical Safety and Risk Management at the Butantan Institute in Sao Paulo, tells SciDev.Net that dengue cases should tend to decrease now the rainy seasons are ending.

He says climate change has contributed to the spread of Aedes aegypti, the mosquito that carries dengue, to places where it did not previously occur.

Camila Lorenz’s research on dengue was funded by FAPESP, a donor of SciDev.Net

*About the author: Bruno de Pierro is a science journalist based in São Paulo, Brazil, and a freelance journalist for SciDev.Net.