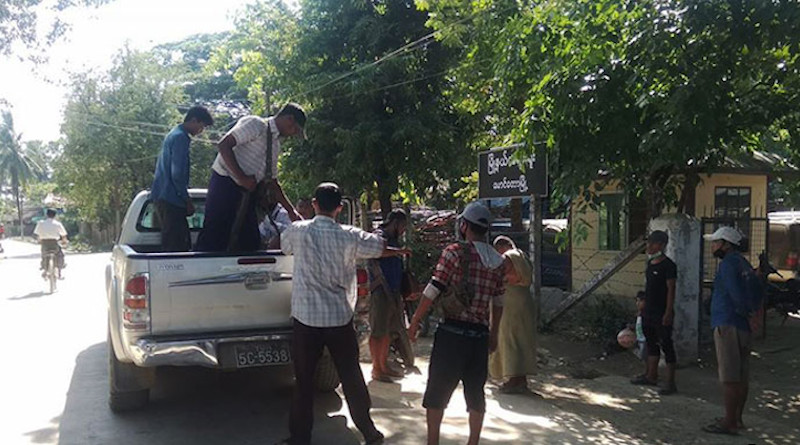 A recently married couple were arrested and charged under the Counter-Terrorism Law earlier this month in connection with a deadly explosion near the village of U Daung in southern Maungdaw Township.

The arrests followed the death of a local betel quid seller from U Daung village, 48-year-old U Aung Tun Thein. On April 30, his body was found with a fatal chest wound — caused by an explosive — in a bamboo grove behind his shop, about 650 yards from the village’s police outpost, where he had reportedly gone to pick bamboo shoots.

The Tatmadaw, meanwhile, on April 30 said it had found the body of an Arakan Army member near U Daung bridge when it went to check on reports of an explosion in the area. The alleged AA member was said to have died when the mine he was laying detonated on him.

The Tatmadaw subsequently arrested Mg Nyi Htay, 19, and his wife Ma Sandar Win, 17, who were near the scene of the explosion, on suspicion of involvement in the blast and charged them under Sections 50(a) and (i) of the Counter-Terrorism Law at the Alae Than Kyaw police station.

“They got married six months ago. Since they are poor, they pluck and sell bamboo shoots and mangoes. When there was an explosion near U Daung bridge, they were plucking mangoes,” Ma Sandar Win’s uncle, U San Aye Kyaw, told DMG.

The couple were transferred to Pyin Phyu police station, and were remanded into custody on May 4 and again on May 14 at the Maungdaw Township Court.

Because Ma Sandar Win is underage, she was released on bail under the Child Law and was turned over to her parents, said U San Aye Kyaw.