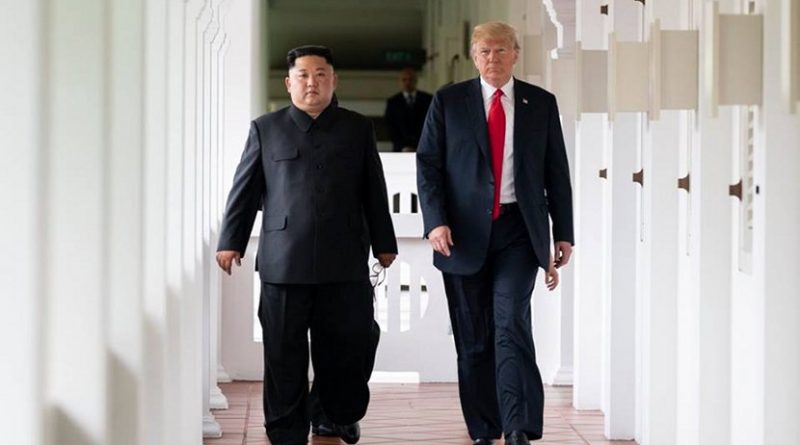 The summit between President Donald Trump and North Korean Supreme Leader Kim Jong-un was pretty much all symbols and no solid content — basically it’s an agreement to talk further with plenty of wiggle room for either side to back out later. But that said it was a striking departure from the gutless and arrogant refusal of 11 prior presidents to make any move towards ending the state of war between the US and North Korea during the 65 years since fighting ended in the bloody Korean War with an armistice in place back in 1953.

Kudos to both Trump and Kim for that.

Odds are that even if North Korea doesn’t get rid of its nuclear weapons, ultimately the US will have to grin and bear it because South Korea looks ready to sign, either on a four-party basis with the US and China, or bilaterally on its own with just North Korea, a peace treaty ending one of the last relics of the Cold War that began with the end of World War II and the division of Korea, Vietnam and Germany into two parts.

If the pro-peace president of South Korea, Moon Jae-in, were to sign a peace agreement with North Korea’s Kim, it would eliminate any justification for the US continuing to keep military bases in South Korea, where 32,000 US soldiers are still stationed as a “trip-wire” in the event of an invasion from the north. At that point the US would lose all leverage for trying to pressure North Korea to eliminate its recently developed nuclear bomb arsenal.

The idea of a neutral Korean peninsula with no US bases is surely horrifying to the neo-conservative strategists of Russia and China containment like Trump National Security Advisor John Bolton, a chicken-hawk war monger who’s never met a war he didn’t like or even promote. But for Koreans and the broader peoples of Asia, getting the US out of Korea would be a blessing. It would remove a crucial component of any potential US first strike against China — the Terminal High Altitude Area Defense (THAAD) anti-ballistic missile launch systems recently installed in South Korea on the bogus justification that they are guarding against North Korean missiles. (Any North Korean missiles aimed at South Korea would necessarily have low-altitude trajectories because of the short distance to target, and would not be vulnerable to THAAD missiles.)

Furthermore, once North and South Korea signed a peace treaty, it would eliminate any ratioale for the still-in-force UN Security Council Resolution 82, a measure which authorized the US-led UN defense of South Korea in 1950 and which has continued to provide the fig leaf of legal cover for America’s continuing colonial domination of South Korea ever since. Even if the US were to continue to veto moves to revoke that Security Council resolution, it would be seen as meaningless with the war officially over.

Surely this was not the intention of President Trump in meeting with Kim, but let him have his moment. Because he desperately needed something positive in the foreign affairs realm to show for his now bumptious, goof-ball 18-month-old presidency, he had to reach an agreement of some kind with North Korea, and now he’s gotten that. The agreement is going to turn out well, too, even if not the way he’d have intended. If President Moon now nominates him and Kim for the Nobel Peace Prize, as he has suggested, they’ll deserve it at least as much as war criminal Henry Kissinger (awarded the prize in 1973 jointly with his North Vietnamese counterpart Le Duc Tho who unlike Kissinger at least had the decency to decline it) and Israel’s Menachim Begin and Egypt’s Anwar Sadat — and surely far more than his predecessor Barack Obama, who proceeded, upon collecting his medal, to ramp up the Afghanistan War yet again, to invade Libya, overthrowing the government there, to meddle in Syria and threaten that country with a missile blitz, and to launch more deadly drone and Special Forces targeted murder attacks against people in numerous sovereign nations than the Bush/Cheney administration ever did.

Corporate Democrats like ex-VP and likely future presidential candidate Joe Biden and Sen. Diane Feinstein, along with hardline neo-conservatives like Sen. John McCain and Bolton can rant that Trump has told out US imperial interests. They clearly prefer an eternal state of war between the US and South Korea, since it’s good for the US war machine and for the arms industry that feeds off it. But endless that endless war policy, whether in Europe, Asia or the Middle East, hasn’t been good for anyone else, abroad or here at home in the US.

Here’s hoping Trump manages to keep his radical right-wing advisors like Bolton from blowing up the deal he’s struck with Kim, and that Moon succeeds in signing a real peace treaty with his northern neighbor that can eventually lead to the reunification of the Korean people, as happened in the early 1990s Germany and after the defeat of the US military in Vietnam in the 1970s.

And here’s hoping too that Trump can take inspiration from this first success and move forward towards a rapprochement between the US and Russia. The last thing the world needs is to see the start of a new missile race [1] between these two nuclear-armed superpowers to produce swarms of hypersonic nuclear-tipped cruise missiles, each on hair-trigger alert and virtually unstoppable once launched at their targets, as increasingly appears to be the next crazy idea on the agenda of both countries’ military establishments. (This new race is itself fallout from the ill-thought-out Bush/Cheney decision, continued by the Obama administration, to pull the US out of the Reagan-era anti-ballistic missile treaty negotiated with the Russians, which has lead to justified Russian fears tat the US is working towards obtaining a first-strike capability against Moscow.)

If only the narcissistic Trump could discover how much better and more ego-satisfying would be the adulation he’d receive, not just domestically but globally, for ending America’s war-mongering ways, and for defusing animosities between this country and both Russia and China, than are the raucus cheers of yahoos for his tub-thumping racist and misogynist MAGA outbursts and actions. Then he might improbably go down in history as a great president instead of as a buffoon and a charlatan.

Sadly, knowing we’re dealing with a mentally unbalanced individual with a troubling fondness for military parades staged in his honor, I’m not expecting that to happen Still, that’s no reason to deride what he’s accomplished with North Korea.

Home » However Tenuous and Whatever His Motives, Trump’s Summit Agreement With Kim Is Praiseworthy – OpEd

The Story Behind A Uniquely Dark, Wetland Soil

When it comes to soils, proper identification is key. Identification allows scientists to determine the story behind the soil: how