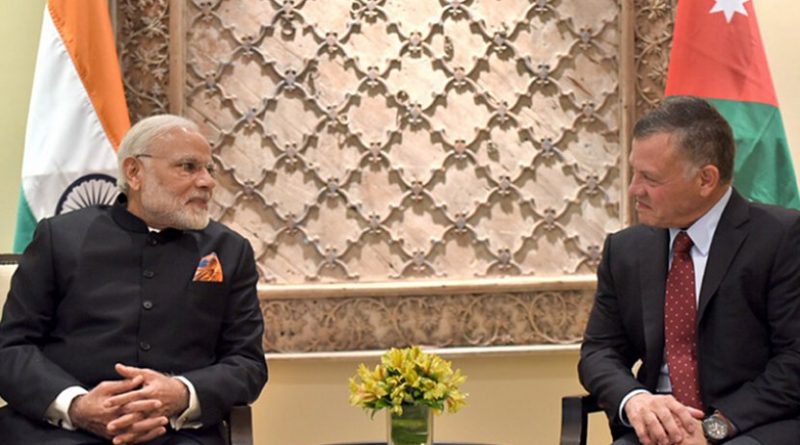 During the close to a century of its existence, the Hashemite Kingdom of Jordan has been, as former President Pranab Mukherjee described in October 2015, ‘an oasis of peace and prosperity.’ While this description rings true when Jordan’s history is juxtaposed with the histories of many of its neighbours who have been caught in an endless cycle of violence, civil wars, and possible disintegration, crisis has been integral to the Hashemite Kingdom’s polity since its founding in 1921.Today, it is passing through one of the worst crises in its history.

Often caught in regional tension and conflict, Jordan has been unwillingly dragged into a host of upheavals in its neighbourhood. Palestine’s partition made Jordan an active player in the Arab-Israeli conflict and the June War only further complicated its position. While it lost the West Bank in that war, it continues to host a substantial number of Palestinians, often estimated at over 40 per cent of the population. This ‘people-without-territories’ situation has fuelled many of Jordan’s social pressures, identity crises, and national tensions.

The recent crisis was trigged when the government sought to increase the income tax, an unpopular move in any country, to ease its financial constraints. This sparked widespread protests in a country that has one of the highest degrees of subsidy on basic food, fuel and above all water. As a result, the government was forced to retreat and resign. But Jordan’s economy is in crisis. Its foreign debt in 2017 stood at over US$38 billion, or 95.3 per cent of the GDP. The kingdom is a semi-rentier economy that depends upon remittances from abroad and foreign aid and assistance. Due to a host of economic and political developments, both have dropped in recent years.

As an emergency measure, Saudi Arabia, UAE, and Kuwait met and agreed to provide immediate financial assistance to the tune of US$2.5 billion. Not to be left behind, Qatar offered to provide US$500 million towards job creation. Despite the deep divisions with the GCC over the year-long Qatar crisis, the richer members are rallying behind Jordan. The Qatari offer comes despite Jordan lowering its relations with Doha in support of Saudi Arabia.

This was a second major injection of funds from the Gulf. In the wake of the popular protests in early 2011, the richer members of the GCC provided US$5 billion over a five-year period. The present bail out is a sequel, albeit at a lower scale due to the financial constraints that the energy-rich Gulf Arab countries themselves are facing.

Neither the change of government nor the financial assistance from the Gulf countries will, however, solve King Abdullah’s problems. He has only bought some time to evolve a national consensus and bring about economic reforms, but his options are extremely limited. Not only does Jordan lack natural resources except Dead Sea minerals, it is also the second driest country in the world in terms of water security.

Jordan has a large refugee population; besides over two million Palestinian refugees, it has been hosting over 1.5 million Iraqi and Syrian refugees. Out of its 9.5 million inhabitants, as many as 2.9 million, or nearly a third of the resident population, are non-citizens. Their presence adds to the social and economic pressures on this resource-scare country. Geographical factors have transformed Jordan into a safe haven for refugees whenever there is a regional crisis.

Should Jordan’s economic crisis bother India? Isn’t it just another internal crisis in another country, that too a resource-scarce one?

This, unfortunately, is not the case. India has far greater stakes in Jordan than commonly recognized. For long, New Delhi has been ignoring Amman, and popular discourses in India are in favour of the energy-rich Gulf Arab countries and Iran or technologically advanced Israel. Important as these other countries are, Jordan is equally if not more important though its importance lies elsewhere. Jordan’s strength lies in its geostrategic location and diplomatic relevance.

Since becoming prime minister, Narendra Modi has been pursuing an assertive but delicate policy towards the Middle East, especially vis-à-vis the Arab-Israeli conflict. A more forceful and public bonhomie with Israel is accompanied by equally assertive engagements with other key players of the region, especially, Saudi Arabia, Iran and, above all, Palestine. Modi’s visits to Israel in July 2017 and Ramallah in February 2018 were standalone visits; that is, he visited one without feeling compelled to visit the other. Many hailed his balanced and de-hyphenated approach.

However, as Modi found out earlier this year, Jordan is a pivot to India’s emerging policy towards the Israeli-Palestinian conflict. While he could separate those two, he could not de-hyphenate Palestine from Jordan. Geography cannot be changed easily. In the initial days, officials described the prime minister’s overnight stay in Amman as a transit visit. But Modi was bowled over by Jordanian hospitality, and he was ferried to Ramallah in a military helicopter provided by King Abdullah. Consequently, within three weeks, Modi was at the airport to receive the Jordan monarch and both leaders jointly addressed the relevance of Islamic heritage in tacking the problems of today. Given the domestic context, this was a significant move on the part of the Indian leader.

If Jordan is the pivot for India to maintain its new-found balance vis-à-vis Israel and Palestine, instability in the Kingdom will pose two major problems. Directly, it will reduce India’s ability to engage with Palestine and provide economic assistance. More importantly, instability in the Kingdom will have a cascading effect on the larger Palestinian issue and return the region to a cycle of violence. Neither scenario is good for India.

India cannot compete with the rich Arab countries and offering financial aid is beyond its capacity. At the same time, a stable and prosperous Jordan serves larger Indian interests, especially when the Kingdom is the most inclusive society in the entire Middle East.

India should invest in the Jordanian economy towards job creation — the major issue facing the country and its youth. There are precedents. Both countries have a joint venture in the form of the Jordan India Fertiliser Company (JIFCO) established in March 2008 with a production capacity of 15,000 tons of phosphoric acid per day; production started in mid-2014. A few weeks ago, the Indian Farmers Fertiliser Cooperative (IFFCO) bought a 37 per cent stake in the Jordan Phosphate Mines Company (JPMC) for US$130 million.

An unstable Jordan will undermine India’s newly found nuanced and balanced approach towards the Israeli-Palestinian conflict and push it back to the insipid, ineffective and routine of yester years. Will Modi transform the current crisis in Jordan into an opportunity for his assertive Middle East policy? Or simply put, will he walk the talk on Jordan being an oasis of stability and progress?

About the author:
*P.R. Kumaraswamy is Professor of Middle Eastern Studies at Jawaharlal Nehru University, New Delhi. His latest edited volume, Handbook of the Hashemite Kingdom of Jordan, is being published by Palgrave Macmillan. Views expressed are of the author and do not necessarily reflect the views of the IDSA or of the Government of India.