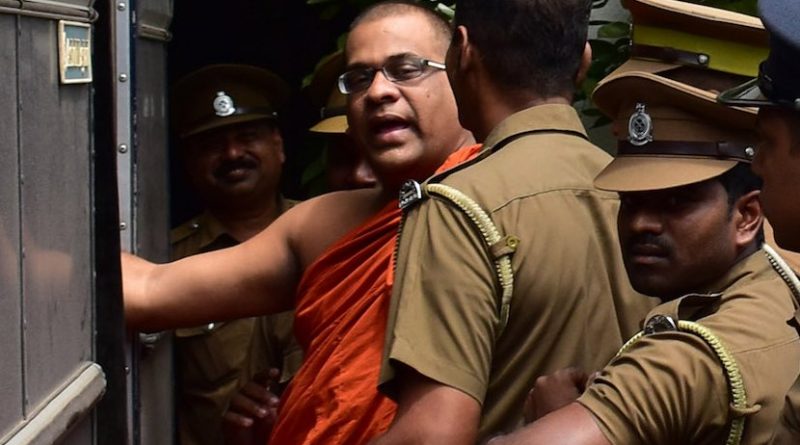 Buddhist monk Galaboda Aththe Gnanasara Thera being escorted to a prison bus after his sentencing by Homagama Court on June 14. (Photo by S. Kumar/ucanews.com)

Controversial Sri Lankan Buddhist monk Galagoda Aththe Gnanasara Thera has been sentenced to six months in prison for threatening the wife of a missing journalist.

On top of the jail time, Gnanasara Thera was ordered on June 14 to pay 50,000 rupees (US$314) in compensation to Sandya Eknaligoda, wife of journalist Prageeth Eknaligoda. He was fined a further 1,500 rupees.

The monk was earlier found guilty on May 24 of intimidating Sandya at a court in 2016. He then accused her of supporting Tamil extremists and blackening the names of military war heroes.

“I humbly made a complaint to his chief Buddhist monk to take disciplinary action against him but they did nothing,” Sandya told ucanews.com after the judgment was handed down.

“The monk accused me of creating a bad name for Sri Lankan military intelligence officials and called me a traitor.

“The monk was previously accused of several anti-Muslim violence and hate crimes but I did not see any action taken against him.”

More than 20 monks and about 400 BBS supporters went to the court in Homagama, just southeast of capital Colombo.

Police arrested him for causing religious and racial disharmony in 2017. This is the first time he has been jailed.

Udaya Kalupathirana, a member of the executive committee of the Free Media Movement and director of INFORM Human Rights Documentation Centre, said the sentencing of the monk is significant because it protects the rights of victims and witnesses.

“The monk wants to attract more Buddhist people for his political ideology. Chief Buddhist monks should take disciplinary action against such monks. All are equal before the law — no one is superior.”

Sandya was awarded the International Women Courage Award by the U.S. last year for her efforts in seeking justice for her husband, a political cartoonist and journalist who went missing in January 2010, two days before presidential elections were held on the island nation. He wrote several articles critical of former president Mahinda Rajapaksa during the election campaign.