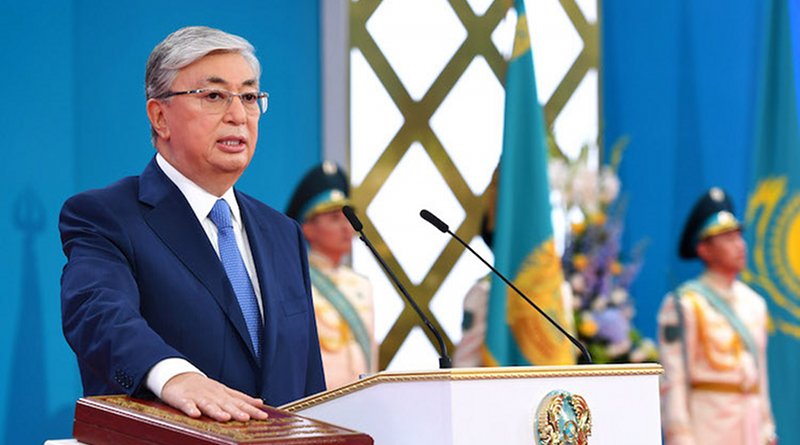 When Kazakhstan went to the polls on June 9 with six candidates challenging the incumbent president Kassym-Jomart Tokayev, one may have thought that the people had a clear choice to make after almost three decades. But many young people in this oil-rich former Soviet Republic do not share that view. Subsequently, they did not bother to vote and when asked had a similar answer: “Does not matter, everything is already known without us.”

World’s largest land-locked country, Kazakhstan was the last of the Soviet Republics to declare independence in 1991 following the collapse of the Soviet Union. Since then, the country has seen only one president Nursultan Nazarbaev. He suddenly announced his resignation in March 2019 and appointed his Senate Chairman Kassym-Jomart Tokayev as interim president.

Among the seven candidates contesting the June 9 election was Dania Yespaeva of the Ak Zhol Democratic Party, the first woman to contest for the presidency in Kazakh history. According to official statistics, voter turnout was 77.5 percent, with 9,274,466 of the 11,960,364 eligible voters having voted. While Tokayev won by a landslide with 70.96 percent of the vote. Yespaeva was a distant third with little over 5 percent of the vote.

After officially assuming the office of the president on June 12, Tokayev emphasised he will follow the strategies developed by Nazarbayev, such as the Third Modernisation, 100 Concrete Steps to Implement Five Institutional Reforms and Digital Kazakhstan programme.

“A large-scale task in the realities of the 21st century is digitisation. It should affect all spheres of life: from the provision of public services to the creation of future economy sectors. The country’s development, including political progress, is directly related to digitisation. It will qualitatively change the content of relations between the state and society,” he said.

Following the elections, many meetings took place in several towns of Kazakhstan to protest the election results under the slogan “Tokayev is not my president”. In the biggest such gatherings for many years, the participants claimed that the elections are not fair and about 500 people were arrested across the country. Tokayev dismissed these views saying “It is their choice,” and he claimed that he has known about the protests in the country.

Though people were not surprised with the outcome of the elections, all kinds of social networks  have been full of information that everybody has known about the results, even before these were declared. “No one doubted the election results. It was not even worth going there (to vote)” said one uninterested youth. “I did not come (to polling booth), because I knew the results without these official actions” added another.

The social networks became the hub of protests against Tokayev’s victory. A lot of VKontakte – a Russian online social media and social networking service – and Instagram users began sharing the videos claiming an unfair election process and aggressive stance of the police toward civil citizens.

At the same time, the majority of the young generation was keeping calm in the existing situation. Many in the age between 18 and 25 did not want to go and vote, even though any citizen 18 and above was entitled to vote. According to a social survey, the majority of young people did not even know the names of the candidates.

“The only person I know is Tokayev, because there are a lot of posters with his name all around the town,” says Azamat Zholdosov, a 19-year old who did not go to the polling booth. “It does not have any sense for me. I am not interested in elections,” he told IDN. Such is the political apathy shown by many young people IDN spoke to. Teenagers are not interested in the political changes and issues, and the only arena where they discuss something are the social networks.

“The young generation of our country is not interested in elections, because they see the juggling of facts, the immutability of processes,” notes Zhanna Mamasheva, Chairman of the Youth Public Association of Mass Media Employees.

“(For them it) does not matter if you participate or not, the question is solved the way that certain power structures like”. In her opinion, people’s actions are inert. They live the way they have lived before. Citizens do not see any changes, neither good nor bad. “We do not have the local executive bodies. The country is ruled by ‘agashki’” she adds.

“Agashki” means the older generation that meant to be respected. The culture of Kazakhstan does not allow people to act against older opinion. We have this system in the country. (That) prohibits us from acting against society’s opinion,” says Kamilla Asanova. “This law makes us do what older people tell us. We are used to living this way”.

Asanova is an active user of social networks and a person who represents views of many Kazakhs. Her posts about current politics is very popular, and she is listened to by the youth of her town. She regrets that at the time of elections she turned full 17. Therefore, she could not vote. However, she observed the election situation in her web pages from the very beginning of election race. She believes that to go and leave your vote is the duty of every Kazakh citizen

“I worry about the fact that my peers are not interested in what is happening in our country. They believe that everything is already decided,” Kamilla notes about the attitude of young people to politics in her country.

“If I only could go and vote I would do that. Even if the elections are not fair, it is the first elections where we do not see the name of Nursultan Nazarbaev. It is stupid to say that we cannot change anything. What if you vote for Kosanov and he will become the next president tomorrow? Maybe your voice will be the decisive one.”

Apathy towards politics and expression of your opinion among youth could also be due to the influence of parents. A 56-year-old taxi driver who declined to give his name asks, “what can we do for it?” He argues “if you are comfortable with life – though it may not be the best, it does not promise us a bright future, but it is enough for us – people wouldn’t want to get into political discussions”.

However, when IDN asked about getting involved in politics, many youth expressed optimism. “Even though the situation is remaining the same at the moment, there are some activities and events taking place in Kazakhstan” was the view expressed by many. They argue that the protest gatherings and interaction in social networks can become the beginning of changes in the mindset of the young generation. “The process has started, and where it leads to the future will show,” said Ruslan Kushlubaev, a youth influencer.

While Nazarbayev made state support for youth a priority in decreeing 2019 the Year of Youth in Kazakhstan, Tokayev tweeted that “smart, creative and patriotic” youth will have the opportunity to drive the country’s reform in the near future.

* The writer, a student of media studies at the University of Central Asia, is doing a summer internship with IDN-INPS.