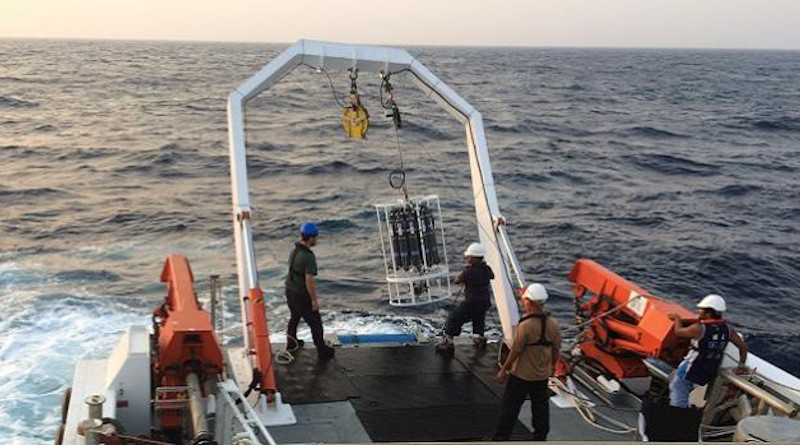 A CTD (a probe measuring temperature, salinity and depth) and rosette sampler is brought on board the RV Thuwal to collect water samples from the surface down to 700 meters at a station off King Abdullah Economic City. CREDIT: © 2020 KAUST

The communities of tiny picoplankton in oceans reveal a great deal about the health of marine ecosystems and food webs. KAUST researchers have examined how numbers of these organisms vary across the year in both coastal and offshore locations in the Red Sea, while investigating the predators and viruses that control them.

The bacterial elements of plankton largely drive energy flows in the aquatic food web in nutrient-poor regions by photosynthesizing and recycling dissolved carbon and other nutrients. Cyanobacteria are autotrophic, meaning they generate their own food using resources, such as light and carbon dioxide. In turn, heterotrophic bacteria and archaea feed on the dissolved organic matter present in the water. Both groups provide food for other organisms, including grazers like heterotrophic nanoflagellates.

“These two latest studies fill a gap in our understanding of tropical marine ecosystems–how bacterioplankton communities are structured and how they function in these vast, underexplored regions,” says Xosé Anxelu G. Morán at KAUST’s Red Sea Research Center, who supervised students Eman Sabbagh1 and Najwa Al-Otaibi2, and their co-authors.

“Oceanographic research has largely been conducted by countries located in temperate and subpolar regions in the Northern Hemisphere,” Morán continues. “It has long been assumed that tropical seas would not have the same seasonal variation in bacterial community dynamics as temperate regions. KAUST’s location and resources enable us to investigate bacterioplankton in tropical seas in greater detail than ever before.”

Sabbagh’s paper focused on shallow coastal waters, analyzing samples from KAUST Harbor every week for a year. They wanted to understand these autotrophic communities and the impact of top-down factors–viral attack and heterotrophic nanoflagellate grazing–as well as the effects of bottom-up factors, such as nutrient availability.

“Our fine-resolution sampling meant we documented direct and sustained predator-prey dynamics between viruses and their bacterial hosts,” says Sabbagh. “Mortality due to viruses, along with nanoflagellate grazing, seemed to dominate Red Sea coastal bacterioplankton losses throughout much of the year. This suggests that top-down control is fundamental in regulating bacterial abundance.”

Al-Otaibi’s paper focused on an offshore site in the central Red Sea, where they collected water samples from fixed depths down to 700 meters periodically over two years. They measured the abundance and cellular characteristics of different autotrophic and heterotrophic picoplankton groups, while monitoring environmental variables.

“Our results showed a clear seasonal variation, particularly in surface groups (the upper 100 meters), with a peak in numbers of autotrophic picoplankton in summer and a lull in winter,” says Al-Otaibi. “Importantly, our study is the first detailed account of the effect of vertical gradients on the distribution of picoplankton communities over the seasons. This seasonality should be included in all future studies of the Red Sea pelagic ecosystem.”

“Long-term, well-maintained studies of tropical sites will be fundamental to prove current hypotheses about the future directions of change in the hottest water bodies on Earth,” says Morán. “In addition, we may gain insight into our future oceans because if we do not slow down climate change, then current conditions in tropical regions will be met shortly in higher latitudes.”