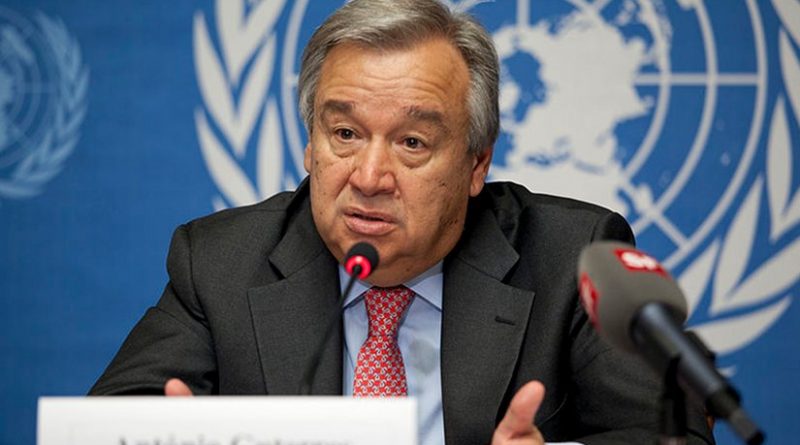 The UN Secretary General, Antonio Guterres, has issued a new technical report, which has raised Iran’s ire, by virtue of adopting the unsubstantiated allegations of US government and parroting Washington’s line about the “Iranian origin” of the 2019 missile attacks on Saudi oil and non-oil facilities.

This report is seemingly timed with the US plan to introduce a draft Security Council resolution that would extend the current bans on Iran’s conventional arms; the latter were introduced in 2007 and yet lifted, per the terms of the 2015 UNSC 2231, stipulating that 5 years after the adoption of the Iran nuclear deal (i.e., October 18, 2015), those restrictions on Iran would be lifted.

The Trump administration, after unilaterally exiting the nuclear deal and thus violating the letters and the spirit of Resolution 2231, is now determined to decimate the deal by forcing the non-implementation of the agreed-upon provisions of the nuclear accord on lifting the ban on Iran’s (import and export of) conventional arms.

But, the problem with the Secretary General’s approach to this issue is that it reeks of anti-Iran bias and manipulation by the US, indeed a sad commentary on what was supposed to be an improvement at the UN leadership over its predecessor (s).

If Mr. Guterres had ever bothered to order a similar investigation of the origins of the arms used against the impoverished people of Yemen, that would exonerate him of the hypocritical double standards criticism.  It is abundantly clear that the large influx of American and British and French arms in the hands of Saudi and UAE armies causing mayhem in Yemen for several years with impunity is the principal reason for the world’s largest humanitarian catastrophe today.

Also, it is indisputable that the UN Security Council for years has rubber stamped the Saudi-led atrocities by backing the deposed Yemeni government, which is now a shell without content backed solely by Riyadh, instead of pursuing a balanced approach — with disastrous consequences.

There is a dire need for a new UN resolution on Yemen, reflecting the realities on the ground, such as the irreversible power of Houthis backed by Iran, which is sadly lacking.

As a result, UN has become part of the problem in Yemen, instead of the solution.Assuming for a moment that Mr. Guterres would have the courage and audacity to conduct an investigation of the role of Western arms in the Saudi-led savage war on Yemen, he would certainly be admonished by Washington and threatened with the loss of UN contributions by the Saudis, who have gotten away literally with the murder of dissident journalist (s) without even a slap on the wrist.

This makes a mockery of UN and of UN’s leadership role in today’s semi-anarchic world, by sending the wrong message that power makes right and UN is an instrument of the powerful and not a neutral forum for pacific resolution of global conflicts.Notwithstanding the above-said, Mr. Guterres had done the UN Secretariat much disservice by essentially doing his two bit to appease the Trump administration, which has yet to receive any strong rebuke by Guterres for walking out of the nuclear accord, authorized by UNSC 2231.

Sadly, Mr. Guterres confined himself to an inconsequential statement of regret, even milder than the similar statements by the European officials.  He has now gone one step further by issuing a one-sided technical report, which is beyond the capability of the Secretary General, putting a seal of approval on US’ accusations against Iran, as a prelude for Washington’s impending new offensive against the UNSC 2231 above-mentioned.

Hopefully, the other permanent members of the Security Council will not go along and act smarter than they did when they adopted the 2007 resolution — that per the admission of former US Secretary of State John Kerry was a throw-in to bolster the nuclear-related sanctions, in other words lacked legitimacy in the first place.

Should the US succeed in derailing the implementation of Resolution 2231 on lifting the arms bans on Iran, then this success will undoubtedly come with a heavy price tag on the legitimacy of UN itself.