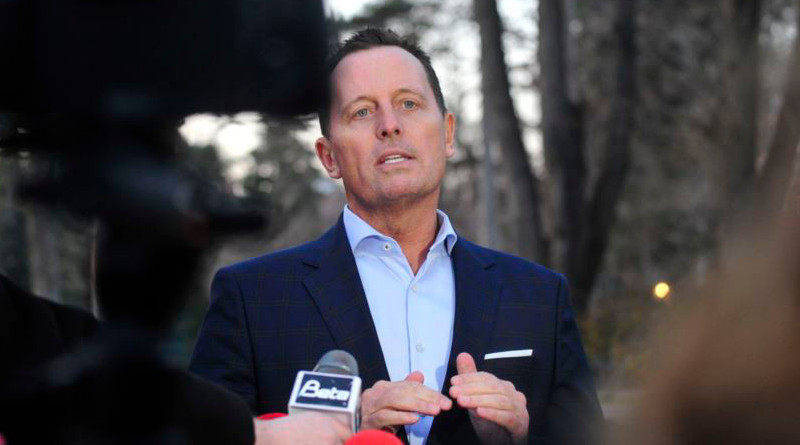 (RFE/RL) — The U.S. special envoy for Serbia and Kosovo negotiations says he has received commitments from both countries to meet in Washington on June 27 for talks aimed at leading to a normalization of relations.

The envoy, Richard Grenell, said Kosovo and Serbia had committed to “temporarily pause the derecognition campaign and the seeking of international memberships” in order to meet at the White House to try to resume talks that have been on hold for more than a year.

“If either side is unsatisfied with the June 27 discussions then they will go back to the status quo after they leave Washington,” Grenell said on Twitter.

“As we have consistently said, we must first make progress on growing the economies. This is the focus.” he added.

Neither government confirmed Grenell’s announcement, but the president and prime minister of Kosovo welcomed the invitation.

“U.S. leadership & support has always been decisive for the prosperous future” of Kosovo, President Hashim Thaci wrote on Twitter.

Prime Minister Avdullah Hoti tweeted that the “continuation of the dialogue is a key step for the normalization of relations and mutual recognition!”SEE ALSO:Kosovo PM: ‘Complementary’ Role For EU, U.S. In Serbia Deal

The European Union’s special envoy to Serbia-Kosovo talks, Miroslav Lajcak, is expected to arrive in Pristina on June 16 to begin discussions on the timing and other details of the resumption of the dialogue, Dinka Zivalj, spokeswoman of the EU office in Kosovo, told RFE/RL.

Hoti, of Kosovo’s center-right Democratic League of Kosovo (LDK), became prime minister on June 3 after winning a vote in parliament by a razor-thin margin.

Three days later the new government scrapped all trade sanctions against Serbia, a move that opened the door to the restart normalization talks with Belgrade.

The tariffs, imposed on Serbia in November 2018, came in response to Belgrade’s diplomatic campaign to encourage some of the 110-plus countries that have recognized Kosovo since it declared independence from Serbia in 2008 to reverse their position.

The tariffs had been partially lifted earlier this year under former Kosovar Prime Minister Albin Kurti, the leader of the leftist-nationalist Vetevendosje (Self-Determination) party.

The United States and EU had demanded that the punitive fees be lifted in full.

Kurti has accused Grenell of rushing to reach a deal with Serbia to score political points for U.S. President Donald Trump, who is seeking reelection this year. He has said such a deal would include a “territorial exchange.”

Grenell has repeatedly denied the allegations