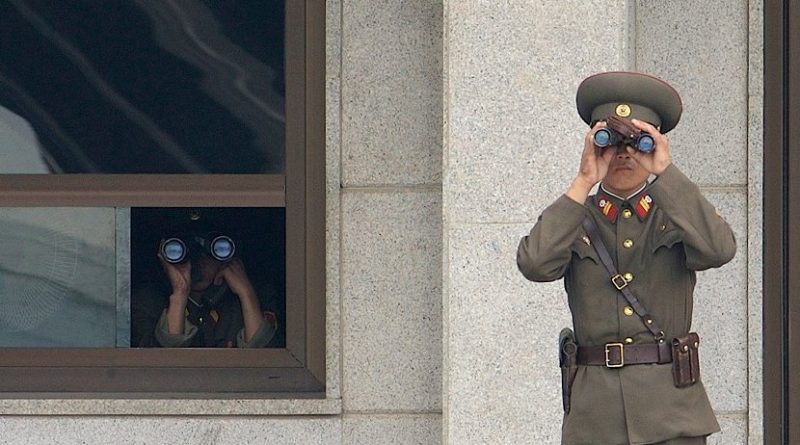 Soldiers from the Korean People's Army look south while on duty in the Joint Security Area. Photo by Edward N. Johnson, US Army, Wikipedia Commons.

Europe is divided over the nuclear threat from North Korea and new unpredictability of an aggressive US response.

As tension mounts over a possible nuclear confrontation with North Korea, America’s European allies are in a quandary. For Europeans, dealing rationally with the gathering storm is impossible for a basic reason: While the DPRK’s Kim dynasty thrives on a mixture of provocation and uncertainty, Washington’s moves in the Asia Pacific were once predictable. Uncertainty is a guiding principle for Donald Trump, and Europeans can only wait with helpless trepidation as North Korean and US leaders exchange threats and counter-threats.

By choice or accident, Trump’s vocabulary of “fire and fury” mirror images of Pyongyang’s repeated threats of war and devastation – a “sea of fire” is the usual term. The threats may also bring to mind the Pentagon’s promise of vintage Iraq to “shock and awe” or even a version of the “madman theory” devised by former US President Richard Nixon and Secretary of State Henry Kissinger in dealing with North Vietnam, though delivered in more subtle terms: “I have been asked to tell you, in all seriousness, we will be compelled, with great reluctance, to take measures of the gravest consequences,” Kissinger told the Vietnamese in August 1969.

Most European media published emphatic headlines recalling the “Cuban crisis” or “North Korea vows to attack Guam.” Few noticed the specific comment offered by the chief of the North Korean strategic forces to the effect that come mid-August, ICBMs “will fly for 3,356.7 kilometers for 1,065 seconds and hit the waters 30 to 40 kilometers away from Guam.” For Pyongyang, the twisted communication amounts to prior notification – something the international community has long criticized the regime for failing to do – and also to a pledge to locate the target areas outside Guam’s territorial waters, as if that makes it an acceptable move.

To detect patterns in Pyongyang’s behavior, it’s helpful to examine Chinese precedents. As incredible as it may seem, North Korean leaders basically want what is allowed of China. In 1995 and 1996, China conducted missile tests close to Taiwan. The 1996 tests were announced in advance to land “30 to 40 miles” off the coast of Taiwan and, in actuality, landed 23 and 35 miles, respectively, from that coast with trajectories that disrupted air and shipping routes.

Evaluations of North Korea’s actual nuclear and missile capabilities are highly dubious. Estimates in just one year, mostly from the United States, have jumped from the evaluation that Pyongyang was far from achieving its goals to growing consensus that the regime is closing in on placing miniaturized warheads on long-range missiles. Accuracy of these missiles is another unknown. First, the North’s 2016 missile tests were unreliable, with little deterrence value, considering that eight out of 10 missiles were lost on launch. Second, little is known about the survivability of the North’s nuclear weapons in the final flight phase. The largest risk – one that North Korea has already taken by twice testing missiles flying over Japan and apparently targeting Japan’s exclusive economic zone in another series of tests – is that deviations from trajectory happen: Area mapping and statistics suggest that the chances of an accident with a North Korean missile finishing its course on Guam territory or a US base are low.

The real change since January – with Trump’s promise, “It won’t happen,” and recent statements from him and some senior officials – is that we have reverted to the posture of the George W. Bush era. Former US Secretary of State Colin Powell first drew a “red line” against any North Korean nuclear testing in 2002 – and Bush moved that red line to the transfer of nuclear capacities in 2006. The Obama administration never drew a red line in the North Korean case, instead pursuing a policy of “strategic patience.” Both have been criticized.

Europeans, often cynical about President Barack Obama’s lack of actual commitment to US allies, must be forgiven for not understanding whether a red line is meant to be enforced in any case.

In a related issue, the Bush administration occasionally delivered tough talk to Europeans only to reverse itself. In October 2006, after North Korea had conducted its first nuclear test, the administration quietly spread the notion that conflict was near. The prognosis of coming war spread throughout Europe’s security circles. One month later, at the Asia-Pacific Economic Cooperation Summit, former US Secretary of State Condoleezza Rice raised the possibility of North Korea becoming a member of APEC.

Given the larger uncertainties about which directions the Trump administration will go, most European statements are based currently on superficial messages reflecting their own strategic culture or their distinct views of Donald Trump. France and Germany are divided, as revealed by their messages’ slant. A German spokesman warned against “saber rattling,” and Chancellor Angela Merkel herself asserted that “an escalation of language does not solve any problem” after Trump’s announcement over Twitter that the US military is “in place, locked and loaded.” Meanwhile, French President Emmanuel Macron’s spokesman commented that “the determination of the American president as it was expressed last night is in any case the determination that all American presidents would have had.”

Foreign Affairs Minister Jean-Yves Le Drian, who ran French defense for five years, had designated the Asia-Pacific among coming crises and termed Trump’s response as “extremely strong and violent” while acknowledging the North Korean threats to neighbors and the United States.  Macron issued a statement on August 12 whose terms are entirely aimed at North Korea, except one final call for “avoiding the escalation of tensions.”

The two initial responses, reflect strategic cultures inside Europe. They are also part of new positioning by France and Germany. Facing voters in the fall, Merkel, always cautious, dares not take any chance and cannot help but remember how the 2002 Iraq crisis and Chancellor Gerhard Schröder’s stand helped win him reelection. Not only has Macron passed the test of elections, but France directly needs an engaged US over issues from the Near East to North Africa. France’s well-informed strategic establishment’s own cautiousness prioritizes counter-proliferation over systematic conflict avoidance.

Culturally, Europeans have long experienced this divide on engagement versus rollback. Neutrals with the Swedes in front typically support an approach of engagement with North Korea. In France, former President Jacques Chirac, closer to Schröder than to the Bush administration on Iraq, nonetheless refused to establish diplomatic relations with North Korea, a state of affairs that remains. The European Union’s External Action Service has entertained for some time the hope of an informal intermediary role with Pyongyang, which has not materialized. The Iranian model beckons – the European Union claims to have served that purpose with its contact group and hopes to do the same to influence China. After this spring’s election of South Korea’s President Moon Jae-in, more explicit initiatives were aired, based on a proposal from Seoul rather than a direct EU initiative. Several capitals consider this role as unrealistic, so little is heard even as South Koreans continue trying to contact North Koreans at international meetings.

For now, the European Union has strongly condemned Pyongyang for the last round of launches, and plans to implement the new sanctions approved by the UN Security Council. Other than that Europeans seem resigned to warily following Trump on Twitter.

*François Godement is the director of the European Council on Foreign Relations’ Asia & China program and a senior policy fellow. He is a non-resident senior associate of the Carnegie Endowment for International Peace in Washington, DC, and an outside consultant for the Policy Planning Staff of the French Ministry of Foreign Affairs. His last published book is Contemporary China: Between Mao and Market, Rowman & Littlefield, 2015.