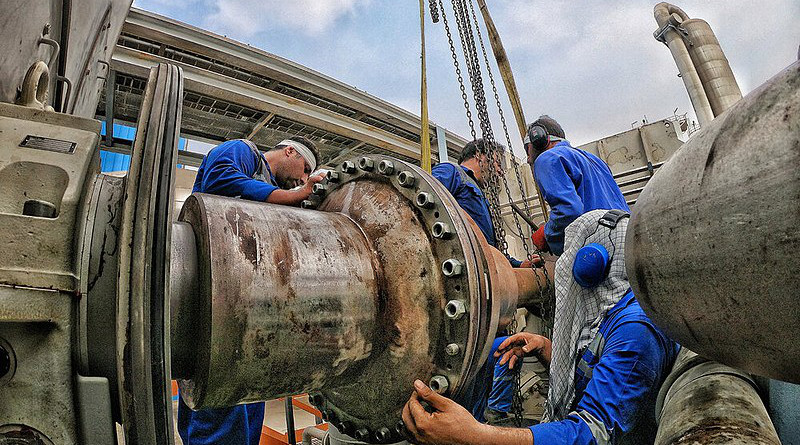 On August 11, I had the opportunity to interview Ali*, a twenty-two-year-old technician working in the petrochemical pipelines of Asaluyeh, in Bushehr province, Southern Iran. Currently Ali is a specialist in maintaining the petrochemical pipes in Asaluyeh and he has been on strike over the past few weeks.

The following is a narrative and a description from the ground, in Asaluyeh, shared from Ali, this young dynamic professional.

“As a specialist in fixing oil and petrochemical pipes in Asaluyeh I am deeply concerned about the current situation permeating in our industrial factory and I have decided to go on strike.  Asaluyeh is a central port city of Bushehr province in southern Iran, on the shores of the Persian Gulf. The city includes a chain of industrial workshops and refineries to produce petrochemical materials that make this a special economic zone in Iran.

“This complex receives raw materials from the South Pars gas field. Petroleum raw materials from different regions are converted into petrochemical materials in Asaluyeh’s refineries and exported from its port to international destinations. This region is important and strategic for the Iranian regime because, with the Mullahs no longer able to export oil due to the sanctions, they now want to exploit and compensate for lost oil revenues with the export of petrochemical products.

“The protests in Asaluyeh have been continuous during past years, the main reason being the non-payment of the salaries of workers and employees. With high inflation and a high cost of living, workers are unable to survive. These protests intensify each time and are constantly confronting the regime. For example, today, Tuesday, August 11th, the strike of workers in Iran’s oil and petrochemical industries and power plants continued for its 11th day and in a row and extended in 21 cities.

“I must inform that the Beed-e-Khoon refinery of Iran’s Halgheh Industry Company, has been completely shut down.  Fearing the consequences of these strikes, site and phase managers and officials are trying to get the workers back to work, through their contractors and other agents.

“In Petropalayesh, the regime is trying hard to break the strike but has not been successful so far. We are now on the 11th day of the strike and our demands have not yet been met. Government police and security forces have warned us several times that if we continue to strike, they will start making arrests and they have been ordered to deal with us severely if the strikers chant slogans or cause damage. We want to receive our salaries regularly because we are in a bad economic situation and the conditions are getting worse every day with the value of the Iranian currency falling every day and inflation rising, but our salaries have remained the same.

“The regime with its security forces has repeatedly threatened us that “we will fire you and replace you with other workers”, but we, who have nothing to lose, say, according to a Persian expression; “ There is no color darker than black”, so we are not afraid of these threats at all. That is why we resist and confront them, and our public supports us.  In reality, they cannot fire us because we are experts in the petrochemical industry, and we have been doing these professional jobs for years and no one can replace us.

“Some workers mockingly say, “let them replace us with other workers, then they would see the petrochemical industry not only shutting down, but it will seriously be damaged.” Of course, the problem of livelihood is not specific to us,  all the people are suffering and have had enough of these conditions and a spark that I believe is on its way will pave the way for masses to flock to the streets. Now, if you add the coronavirus outbreak to this situation, it makes it terrible. Asaluyeh is currently on red alert in terms of the coronavirus prevalence and the death toll is high. I do not know the precise statistics but in Assaluyeh high number of people die daily. Now more than ever, Iranian people need the support of the international community and need their voice to be reflected in international media.”

According to local monitoring organizations: “The Iranian regime is trying to cede islands near Asaluyeh to China to raise cash. But people on social media and everywhere have protested this issue and expressed their hatred and disgust for the treacherous sale of the people’s wealth. Of course, Iranians want a relationship with the whole world within the framework of mutual respect to ensure the interests of Iranian people. But they oppose a contract that seeks to sell the country’s national assets with the aim of maintaining the Mullahs in power.”

In his statement Ali continues:

“The Iranian people now condemn not only this policy but also the regime’s other policies on Syria, Yemen, Lebanon, and Iraq. All workers ask how it is that we are sitting on a sea of oil and gas but have been in this miserable situation for years! People are angry that our money is going to other countries because they realize that not only did they not earn anything during these years, but it only added to the deaths of their youth. People are aware the sanctions are due to the same destructive policy of the regime that internally promotes repression of the Iranian people and externally exports terrorism and incites war, which is why Iranian youth in the recent protests chanted “neither Gaza nor Lebanon, I sacrifice my life for Iran.”

“In short, Iran is on the brink of silent deaths, one in subsistence and the other in the Coronavirus outbreak. The majority of workers and toilers no longer have bread on their tables and their table is getting smaller and smaller every day, and young workers like me, have no choice but to strike and demonstrate their growing anger and revolt against the status quo.  The Mullah’s regime has left us no choice but uprising and revolt against the Tehran. Therefore my message must be conveyed across the world.

*not his real name

One thought on “Iran: Petrochemical Workers On Strike While Succumbed Into Poverty – Interview”