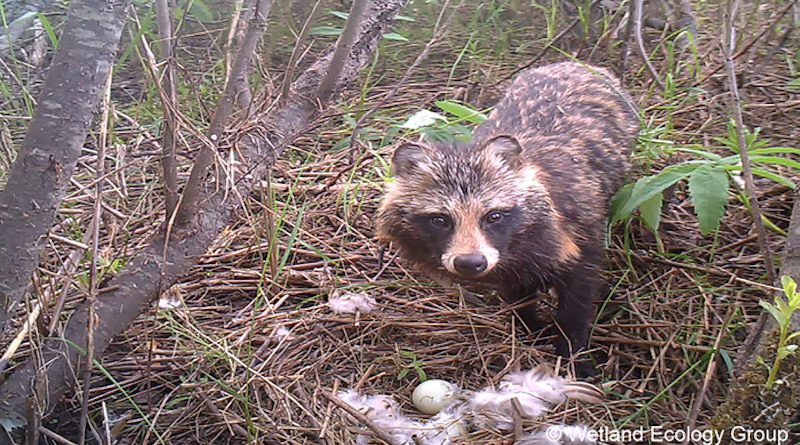 A raccoon dog destroying an artificial mallard nest on the shore of a Finnish lake that is part of a wetland birdlife conservation programme. CREDIT: Wetland ecology group, University of Helsinki

Duck species in Finland are faring poorly, with more than half of the species listed as threatened to a varying degree, with alien predators as one of the suspected causes.

A new study proves the suspicions well-founded. In experiments carried out over three years by the University of Helsinki, Finland, and Aarhus University, Denmark, wildlife cameras recorded an abundance of images of alien species predating artificial nests established by the researchers in Finland and Denmark.

More than 400 artificial nests containing farmed mallard eggs were created, of which roughly 290 were located around southern Finland. The nests were built in natural duck nesting environments. In Finland, raccoon dogs (Nyctereutes procyonoides) were more common nest predators than red foxes, although in Denmark the situation was reversed, possibly reflecting the species local relative abundance.

“The raccoon dog was the most common mammalian predator in all of the environments studied in Finland. As expected, raccoon dogs destroyed nests on shorelines, but surprisingly often also in forests close to wetlands,” says Postdoctoral Researcher Sari Holopainen from the Finnish Museum of Natural History Luomus, University of Helsinki.

Wildlife cameras revealed that many nests were visited by more than one predator. Corvids were often the first to notice the nests. On occasion, they would break an egg in the nest, which would attract mammalian predators to the spot. American minks and raccoon dogs often visited nests previously predated by others.

“Our research shows that predators cohabiting the same area can benefit from one another. Eggs broken by corvids offer a clue to mammalian predators, which, in turn, are a threat to both eggs and female ducks. In other words, the effect of a diverse predator community can exceed the sum of its species,” Holopainen says.

The raccoon dog is a genuine habitat generalist

In terms of utilising their environment, the raccoon dog was found in many ways to be more versatile than native species. The species was commonly observed on shorelines and shore forests, and it was flexible also with regard to agricultural and urban landscapes, whereas the presence of individual native mammal predators was restricted by habitat type. In addition, raccoon dogs were found to be an adaptive part of the predator community, as it was either the only species or a part of a community, rich in species that visited nests during the week-long observation period.

According to the researchers, the artificial nest experiments cannot directly prove that the raccoon dog has an effect on duck populations. “What the results do show, however, is that the raccoon dog is a more common nest predator than native mammalian species, and that it is abundant in a range of duck nesting environments,” Holopainen explains.

Several reasons for the decline of waterbird populations

In addition to alien predators, the decline of waterbird populations is caused by several factors, of which many are related to excessive eutrophication. However, the results of the artificial nest experiments help to understand the reasons for declining waterbird populations.

“The decline of many waterbird nesting populations, especially in eutrophic lakes, matches temporally the increasing abundance of raccoon dogs and American minks. This came out as we studied long-term changes in aquatic birdlife between the periods 1951–1970 and 1996–2015 using datasets collected in the Häme region by Pentti Linkola, the late fisherman,” says Hannu Pöysä, a principal scientist at the Natural Resources Institute Finland.

The datasets provided a unique opportunity to assess, among other things, the role of alien predators in the decline of waterbird populations, since the data from 1951–1970 depicted a period of time when the raccoon dog and the American mink were few in number in Finnish nature.

The raccoon dog in Finland

The raccoon dog (Nyctereutes procyonoides) is a species indigenous to South-East Asia that was introduced as a fur animal in areas of the Soviet Union close to Europe from the 1920s onwards. From there, the species has spread to the continent, gaining ground thanks to its capacity to travel long distances. The longest migration observed using a GPS collar occurred in early 2016 when a raccoon dog made a 600-kilometre journey.

In Finland, the first raccoon dogs arrived as early as the 1930s. While the regional population is especially dense in southern Finland, the species is also able to live in Lapland. In fact, a relentless battle is being fought on the border between Finland and Sweden to prevent the species from spreading to the latter country.

In Finland, the number of culled raccoon dogs has grown steadily. In the early 1980s, the annual number of slain raccoon dogs was roughly 20,000. In the peak year of 2016, that number had increased tenfold. Indeed, the raccoon dog is Finland’s second or third most common prey animal. Additionally, more than 20,000 raccoon dogs are estimated to be killed by road traffic each year.

In 2019, the EU added the raccoon dog to the list of harmful invasive alien species. One of the reasons for this was its impact on avian and amphibian species. The raccoon dog can carry and spread a number of diseases, including rabies, echinococcosis, mange and trichinellosis.