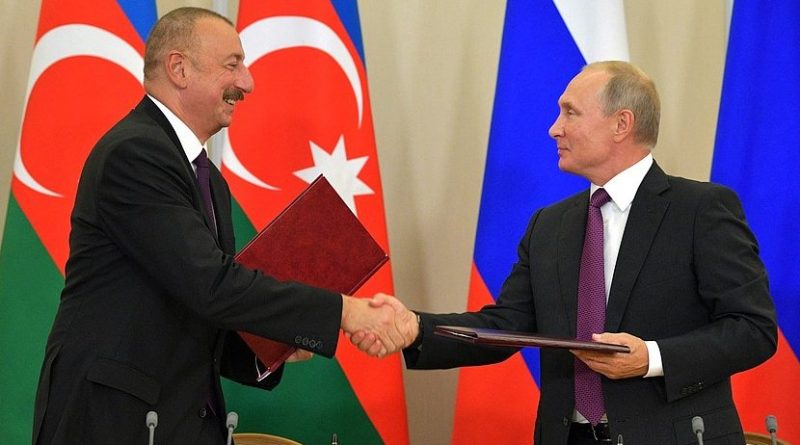 Azerbaijan-Russia relations face increasing challenges as the geopolitical situation in the South Caucasus evolves. A series of events tested the bilateral ties and there is an increasing amount of evidence that some reconsideration of foreign policy on Azerbaijan’s part could be taking place.

The first challenge was the July fighting on Armenia-Azerbaijan frontier, far from the actual source of conflict – Nagorno Karabakh. What could have been a relatively unnoticed confrontation, it drew international attention due to the geostrategic infrastructure which runs near the fighting zone in Azerbaijan’s Tovuz region. Those are:

In addition, the region also has the Baku-Tbilisi-Akhalkalaki-Kars (BTAK) railroad (unveiled in 2017) and rarely mentioned the fiber-optic cables linking Europe with Central Asia. The Tovuz corridor also has a crucial Azerbaijan-Georgia highway, which allows Azerbaijan to connect to the Black Sea.

Thus in July Azerbaijan faced a threat to its major income. Damage to the infrastructure would also diminish the country’s geopolitical weight as a safe source of oil and gas. While fighting in or around Nagorno Karabakh takes place occasionally and at times reaches a serious level, such as in 2016, it nevertheless fits into the overall narrative of more or less predictable military scenarios which military and political leaders in Baku would expect. The Tovuz fighting, on the other hand, goes against most military narratives and required Baku’s tougher reaction. This is how the ties with Russia, Armenia’s major economic and military ally, come under intense scrutiny in Baku.

It is has always been a long-term challenge for Azerbaijan. Baku occasionally expresses its concerns on Russia’s military support for Armenia, but the criticism has usually been aired though newspapers and media rather than by high-level political figures. This changed following the July fighting.

Reasons are multiple. First, Russia (using its 102rd military base in Gyumri) and Armenia launched snap combat drills on July 17-20, just as the fighting in Tovuz region was still unfolding. Second, a series of flights of Russian military cargo planes to Armenia took place right after the July fighting.

In a notable change of tone the Azerbaijani president Ilham Aliyev surprisingly publicly complained to his Russian counterpart Vladimir Putin, stating that the recent reports on allegedly increasing Russian military support (400 tons of military hardware) for Armenia raise concerns and questions in Azerbaijani society. Perhaps as a reaction to growing bilateral differences, the Russian defense minister Sergey Shoigu visited Baku to assure the Azerbaijani public that the flights were not of a military nature, but rather transported materials for the 102nd military base.

However, the affair did not end there as a senior adviser to Aliyev, Hikmet Hajiyev, on August 29, following Shoigu’s visit, claimed that “the explanation by the Russian side is not entirely satisfactory.” This effectively meant publicly refuting the Russian defense minister’s statements, further aggravating differences between the two states.

A September 1 article by Nezavisimaya Gazeta claimed that Azerbaijan had readied 500 Syrian militants in preparation for a “blitzkrieg against Armenia” and that Turkey has its troops on Azerbaijani soil. Baku vehemently criticized the report calling it “slander and [a] dirty campaign against our country.”

Yet another sign of troubled ties is the September 6th decision by Azerbaijan’s Defense Ministry opting out the Russia-led “Caucasus-2020” military drills (planned to be held in the southwest of Russia). Only two servicemen will be sent as observers. Though officially no concrete reasons for the withdrawal were given, it is possible to link the decision to Azerbaijan’s recent grievances at Russia.

Some larger reasons too might be at play motivating a change in Azerbaijan’s rhetoric. The Minsk Group, the body that aims to facilitate the negotiations between Armenia and Azerbaijan is faltering. No concrete way to resolve the stand-off is present and the July fighting has just showed that diplomatic tools are receding. A vacuum is being created for regional powers to fill in. This is how Turkey comes to play an increasingly larger role in Baku’s strategic calculus.

Indeed, as the July fighting unfolded Turkey has been especially supportive of Azerbaijan. For instance, Turkish President Recep Tayyip Erdoğan noted “Turkey will never hesitate to stand against any attack on the rights and lands of Azerbaijan, with which it has deep-rooted friendly ties and brotherly relations.” Turkey’s Defense Minister Hulusi Akar even warned that Armenia will be “brought to account” for its “attack” on Azerbaijan. Then large Turkish-Azerbaijani military exercises followed.

Turkey’s calculus here is clear as the country needs to defend the vital oil, gas and railway infrastructure coming from Azerbaijan. And considering how far has diplomacy receded around Nagorno Karabakh issue, Turkey and Russia are set to play an even larger military and economic role in the South Caucasus. For the moment open rivalry will be avoided, but for Moscow and Ankara the region represents yet another area of covert competition along with Syria and Libya.

However, casting Azerbaijan-Russia relations as deteriorating is not entirely correct. Intensive cooperation still exists between the states. Azerbaijan’s Minister of Foreign Affairs, Jeyhun Bayramov, paid an official visit to Russia on August 26 at the invitation of Russian Foreign Minister, Sergey Lavrov.

In late August-early September Azerbaijani servicemen participated in the “Tank Biathlon” and also won the Sea Cup competition – both held as part of the “International Army Games – 2020” organized by the Russian Ministry of Defense.

It is still hard to see whether Azerbaijan’s changing rhetoric towards Russia is more than just a temporary, tactical maneuver. It could be a clever diplomatic game Azerbaijan has always pursued since 1990s – namely, facing its larger neighbors against one another. Nevertheless, the rhetoric and recent political decision signal a search for reconsideration of some basic elements in Baku’s strategic vision. Turkey’s bigger role is likely to be sought more intensively, while hopes for a diplomatic solution to the Nagorno Karabakh conflict would further recede.