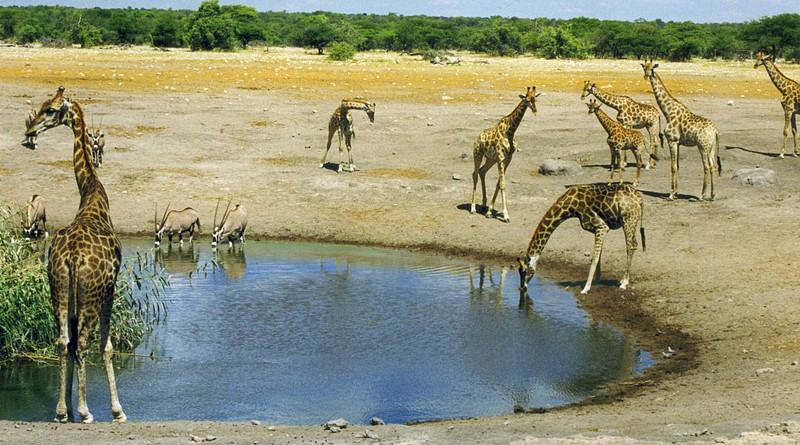 As they roam around the African savanna in search for food, giraffes and elephants alter the diversity and richness of its vegetation. By studying the foraging patterns of these megaherbivores across different terrains in a savanna in Kenya, scientists from the Smithsonian Tropical Research Institute (STRI) and collaborating institutions discovered that these large mammals prefer to eat their meals on flat ground, potentially impacting the growth and survival of plant species on even savanna landscapes, such as valleys and plateaus.

Megaherbivores are more concerned about eating as much food as possible while expending the minimum amount of effort, than about avoiding potential predators. Elephants may consume as much as 600 pounds of vegetation in a day; giraffes, about 75. This drove scientists to wonder about the impact of these megaherbivores on vegetation across a range of landscapes in the savanna.

“Previous studies have demonstrated that megaherbivores adjust their movement patterns to avoid costly mountaineering,” said co-author David Kenfack, STRI staff scientist, coordinator of the ForestGEO network forest monitoring plots in Africa and recently elected Fellow of the African Academy of Sciences. “We wanted to know the extent to which fine-scale variations in topography may influence browsing damage by these charismatic megaherbivores and evaluate whether seasonal shortages in food availability would force the megaherbivores to venture into areas with rugged terrain.”

Their observations conducted within a 120-hectare Smithsonian ForestGEO long-term vegetation monitoring plot located at Mpala Research Center in Kenya confirmed that giraffes and elephants prefer flat ground while foraging. They compared the damage on Acacia mellifera trees, which grow all over the savanna landscape and are a common meal for megaherbivores. They found that the trees growing on steep slopes were taller and had fewer stems than those in valleys and plateaus, suggesting that elephant and giraffes tend to avoid feeding in these less accessible habitats.

This behavior did not change during the dry season, when resources become scarce, indicating that these two species would rather disperse to new areas with more favorable conditions than climb up a nearby slope to feed.

For the authors, these feeding patterns may help preserve steep slopes as habitat refugia, with a greater diversity and density of vegetation than more frequently visited areas. Their findings support this argument: the number and variety of trees encountered on the steep slopes was higher than in the valleys and plateaus.

“This study has broadened our understanding of the role of topography in explaining diversity patterns of plants,” said Duncan Kimuyu, a Smithsonian Mpala postdoctoral fellow, lecturer at Karatina University in Kenya and main author of the study. “Further research is warranted to understand how other factors such as differences in soil properties may interact with topography and megaherbivores to influence the growth and survival of vegetation in the African savanna.”

Home » How Do Giraffes And Elephants Alter The African Savanna Landscape?