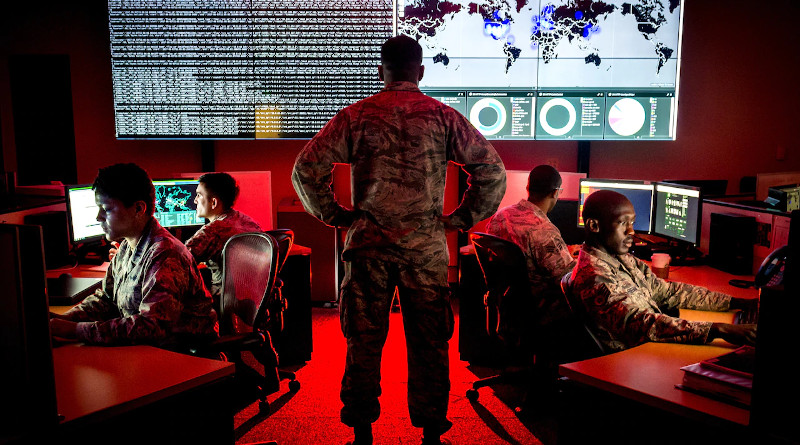 Defense Secretary Dr. Mark T. Esper spoke Thursday about Army modernization efforts that harness new technologies that will benefit the warfighter. His remarks were given during the Association of the United States Army’s annual meeting.

“Today, emerging technologies are expanding the geometry of the battlefield and transforming how we think about, prepare and plan for war,” he said.

They also exploit cyberspace as a means to undermine U.S. advantages without confronting the Defense Department’s conventional strengths, he added.

The reason for this transformation, he said, is because near-peer rivals China and Russia are seeking to erode America’s long-standing military advantages through cutting edge military innovation such as precision long-range fires, anti-access area denial systems, or A2AD, and other asymmetric capabilities designed to counter U.S. strengths.

“In space, Moscow and Beijing have weaponized a once-peaceful domain with killer satellites, directed energy weapons and more in an effort to seize the high ground and chip away at our military edge,” he said.

To remain ahead of these threats, the department must harness new technologies, Esper continued.

In the last several years, the Army has “ruthlessly redirected time, money and manpower to its highest priorities,” he said, noting hypersonic weapons are at the top of that list of priorities.

“As our competitors develop long-range fires to inhibit our freedom of maneuver, we’re increasing our investments in hypersonics over the next five years, so we can ramp up testing and develop these capabilities to the warfighter as quickly as possible,” he said.

In March, the Army and Navy reached an important milestone by jointly launching a successful test of a hypersonics glide body, he noted. The plan is to integrate this technology into an Army battery by 2023.

At the same time, the Army is investing in the interim maneuver, short-range air-defense platform to provide soldiers with 360-degree protection from unmanned aircraft systems and other low-altitude aerial threats, he said.

This system will most likely be integrated into four battalions in Europe in 2023, he added.

To bolster the department’s advantage in the land domain, the armored multi-purpose vehicle, the replacement for the Vietnam-era M113 armored personnel carrier, is currently rolling off the production line, he added, and it is being integrated into the armored brigade combat team.

These and other technologies and developments are building combat credible capabilities, allowing the DOD to target A2AD complexes and enable joint maneuvers across all domains, thanks in large part to industry partners who have persevered during the COVID-19 pandemic and kept supply chains open and delivery of systems on time, he mentioned.

Army Futures Command has been instrumental in helping to develop emerging technologies across all domains, Esper said.

The command recently conducted a live-fire simulation of unmanned to unmanned teaming with drones and satellites relaying target coordinates with ground artillery and artificial intelligence-enabled weapons systems, he said.

Another AFC initiative, Esper said, is Project Convergence 2021. As the name suggests, it is a multiplatform initiative being developed to merge joint force capabilities and keep pace with technological change in order to help the maneuver force operate more efficiently across the land, air, sea, space and cyberspace domains. He added that allies and partners will be included in this effort.

He also added that “Project Convergence will play an integral role in the department’s development of Joint All-Domain Command and Control, which will modernize how the military fights.”

The defense secretary then explained the importance of working with allies and partners by providing some examples.

In 2018, the Army stood up the Multi-Domain Task Force to synchronize modernization efforts of joint assets with partners in the Indo-Pacific region, he said. Next year, its efforts will be centered in Europe.

In Europe, Stryker units will increasingly deploy in continuous rotations in the easternmost edge of Europe, he said.

Plans are also underway to rotate the lead element of the Army’s new V Corps into Poland, once agreements are finalized, he noted.

The Army is strengthening alliances and partnerships, particularly in the Indo-Pacific region, where it is also expanding training exercises that enhance interoperability, he said.

This year, the Army is stationing a company-sized Stryker vehicle training set in Thailand to support the Royal Thai Army as they build their own Stryker program, he said. The Army also plans to expand its International Military Education and Training Program and increase military school slots in support of their Stryker program.

Worldwide, the Army and the other services are employing a concept known as dynamic force employment, he said.

“The Army applied this to build rapid-power projection through dispersed, prepositioned equipment. This has enabled the department to become more nimble and less predictable and better capable of rapidly shifting to combat operations as needed,” he said.

All of these efforts prepare the department “for the high-end fight that we hope we must never have but must be prepared to win,” Esper concluded.