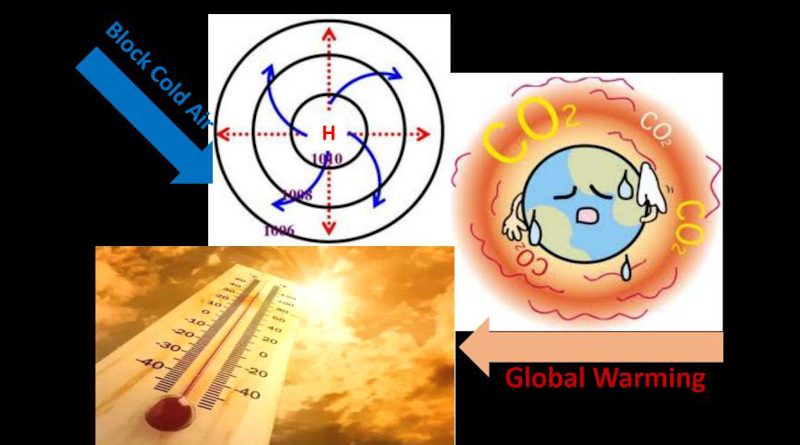 Schematic diagram of possible causes of the hottest spring in eastern China in 2018 CREDIT: Chunhui Lu

The spring of 2018 was the hottest on record since 1951 over eastern China. This record-breaking temperature event caused drought, warm winds and serious impacts on agriculture, plant phenology, electricity transmission systems and human health. Both human-induced global warming and anomalous circulation increased the chance of this extreme high-temperature event, according to a new attribution analysis by Dr. Chunhui Lu and Prof. Ying Sun of China Meteorological Administration and their collaborators from the UK Met Office.

The authors published their results in Advances of Atmospheric Sciences, with a call to action against the increasing extreme high-temperature events in China. During this hottest spring, over 900 stations reached their record spring mean temperature; the daily maximum temperatures at 900 stations were higher than 35°C, with the maximum value (41.7°C) observed in Zhejiang Province; and tropical nights (daily minimum temperature > 25°C) appeared in May at 62 stations over eastern China for the first time since meteorological observations began in the early 1950s.

The researchers used a relatively new attribution method to estimate the quantitative contributions from anthropogenic forcing and circulation to the probability of 2018-like high-temperature events. The newly available data from the Hadley Centre event attribution system provided large-ensemble runs and allowed the researchers to estimate the probabilities of a 2018-like event: (1) for springs with high and low correlation circulation patterns relative to the spring of 2018; and (2) with and without the effect of anthropogenic influence.

“Quantitative estimates of the probability ratio show that anthropogenic forcing may have increased the chance of this event by ten-fold, while the anomalous circulation increased it by approximately two-fold,” says Prof. Sun. “The persistent anomalous anticyclonic circulation located on the north side of China blocked the air with lower temperature from high latitudes into eastern China, which is the direct dynamical cause. Global warming provides a favorable climate background for the occurrence of this extreme high temperature event.”

The researchers also compared the AMIP-based results with those derived from a CMIP-type model–the Canadian Earth System Model. The results showed similar quantitative contributions from human activities and circulation influences, suggesting a robustness to their findings.

“Future work on the event attribution system may be needed to allow us to conduct attribution studies of extreme events more promptly and efficiently,” Prof. Sun adds.

Home » What Was Responsible For Hottest Spring In Eastern China In 2018?

How Does Vietnam Maintain Its Growth Momentum In 2021? – Analysis

By Randall Puah Vietnam was one of a handful of Asia-Pacific countries to eke out full-year growth in 2020, logging 1.6%

Pakistan: Resurgence On The Cards In Khyber Pakhtunkhwa – Analysis