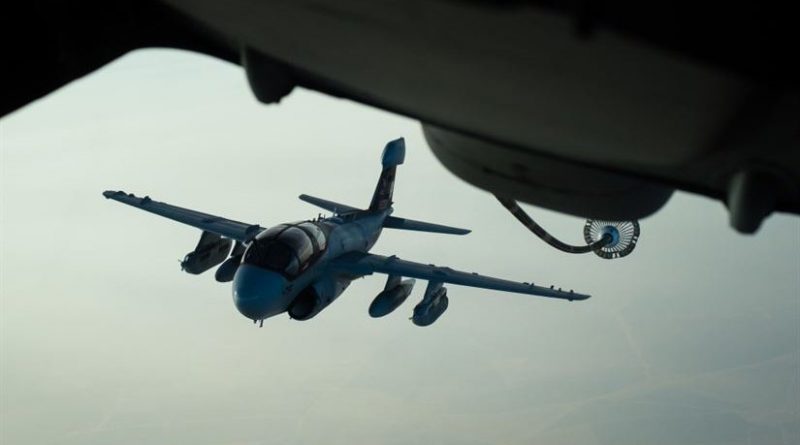 A U.S. Marine Corps EA-6B Prowler separates from a KC-10 Extender refueling operation near Iraq. Prowlers specialize in interrupting enemy electronic activity and obtaining tactical electronic intelligence within the combat area. The Prowler has provided protection for strike aircraft, ground troops and ships by jamming enemy radar and communications in the support of the liberation of Mosul, Iraq. Air Force photo by Senior Airman Tyler Woodward

Iraqi forces and Kurdish peshmerga are making gains in the approach to Mosul, but fierce fighting is expected in the dense terrain inside the northern Iraqi city, the Pentagon’s press operations director said Tuesday.

The effort to liberate Mosul from the Islamic State of Iraq and the Levant is a tough fight that is only going to get tougher, Navy Capt. Jeff Davis told reporters at the Pentagon.

Progress is being made on the northern, eastern and southern sides of the city, he said. In fact, Iraqi counterterrorism forces are inside the city in the east, he added.

“They’re clearing those eastern neighborhoods of Mosul city, doing this in a deliberate and incremental manner so as to safeguard the civilian population as much as possible,” Davis said.

However, he noted there is no direct relation between how much area of eastern Mosul has been cleared and how much of the battle remains.

“It may be one-third cleared in terms of acreage, but it’s not one-third clear in terms of challenge and task ahead,” he said, “because as they get closer to the center of the city, it’s going to get more dense and more fierce in the fighting.”

Over the last 24 hours, the U.S.-led coalition conducted seven strikes in support of this operation, including six near Mosul and one near Qayyarah, according to Davis.

The strikes included 53 munitions, bringing to 3,988 the number of munitions the coalition has used in the effort for Mosul since Oct. 17, when the battle for the city began, he said.

Syrian Democratic Forces continue to make gains in efforts to isolate the key Syrian city of Raqqa, Davis said. The SDF are closing in on two axes in northern Syria and are within two kilometers of each other to cut off a pocket of ISIL control, Davis said.

“Yesterday, over 30 square kilometers were cleared in this effort,” he said.

Davis said the coalition delivered nine munitions from aircraft against ISIL targets in support of the SDF operations yesterday.

The latest munitions used bring to 241 the total number of munitions delivered in support of the SDF since the offensive for Raqqa began Nov. 5, Davis said.