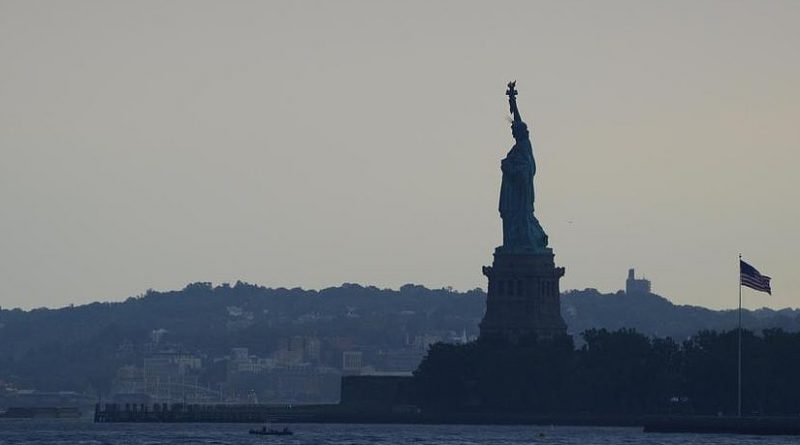 Various political science scholars have identified a striking resemblance between the Germany of the years before the rise of the Nazi Party (the years of the Weimar Republic) and the United States of today. The question has arisen: could what happened in Germany some 84 years ago happen now in the US?

That is to say, could America, with its democracy, checks and balances of government branches, liberalism, acceptance of diversity, championing of human rights, ever turn into a fascist state? An answer to that question was already hazarded by Lewis Sinclair in his 1935 satirical book titled It Can’t Happen Here. It is a sort of prophetic book where Sinclair makes the point that, given the right circumstances, authoritarian dictatorships and genocide can happen anywhere.

What are some of the parallels between the Weimar Republic and the US of 2016? The Weimar’s society was a culturally and socially progressive one with liberal attitudes prevalent everywhere, especially in Berlin. And it was democratic. But it was also a period of political gridlock, fragmentation and economic hardship. A vast majority of Germans, after the harsh conditions of the Treaty of Versailles felt disenchanted with capitalism and the so called “international order,” a preview of what would eventually arrive later: global capitalistic economics. So, from 1919 till 1933 the tensions between left and right erupted not only in parliamentary debates but quite often in violence in the streets.

The popular alternative to liberal capitalism, which was perceived as elitist and doing the interests of the rich and powerful took the form of communism and anarchism. It became the extreme left. This was bound to provoke a reaction and it did in the form of another alternative, and extreme fascist movement on the right, the National Socialist Party of Nazi Party so called. Those two factions went at each with enthusiasm and in short order, by the early 1930, had managed to turn democracy into an up-side-down dysfunctional system with a flawed electoral system which included the misguided logic that democracy was designed to destroy itself.

In such an atmosphere compromise and working coalitions, vital components of any democracy, became dirty words, a sign of weakness to be avoided at all cost. Intolerance and intimidation were the prevalent mood. The great bullies and intimidators proved to be the Nazis who working via the democratic system managed with only 33% of the votes of the 1932 election to reach a plurality in the German Reichstag. Hitler was voted in as Chancellor by the Bundestag (he won by one vote) and a few months later the Reichstag passed the Enabling Law, abolished democracy and ushered in the Third Reich. Hitler had the army swear allegiance to him and declared himself dictator for life. All done “democratically.” By the time the German people realized that in effect they had lost their freedom, it was too late.

It is uncanny, indeed, frightening, how parallel are the events in the US in 2016. The causes may be different but the symptoms are quite similar. As in Germany we have just come out of an economic recession. People at the lower scale of the economic pyramid are still angry that those who caused the economic crisis, the economic barons on Wall Street got away with it while the political establishment looked the other way. One of the candidates went around offering lectures to them at $300,000 each.

It does not take a genius to realize that the political system is dysfunctional and polarized and nothing gets done. Here again, this is quite similar to what happened in the Weimar republic.

In Weimar Germany one reason for the political fragmentation was because the electoral system allowed parties with minute percentages of the vote to win seats in the Reichstag. In the US, political parties controlling the state legislatures have gerrymandered districts so much that now there are only a handful of marginal districts.

A serious consequence of the gerrymander is that Republican candidates for Congress often appeal to the hard-right fringe to win elections. Democrats are just as guilty at gerrymandering, except they have not been nearly as effective in most states, meaning that Republican control of the House of Representatives seems all but assured for the foreseeable future.

Trump is the culmination of over 30 years of Republicans convincing many Americans that government is the enemy. Republicans have dismantled government programs and regulations in a self-fulfilling prophecy that reinforces the perception of government’s ineffectiveness. Now, to the horror of the Republican establishment, Donald Trump has seized their message and is channeling it with gusto, but with his own warped, authoritarian tinge. He openly talks about implementing torture, undermining freedom of speech and the press and behaving belligerently with other nation-states.

What is most disturbing is the search for scapegoats going on as we speak, and demonization of Muslims and Latinos which is ominously redolent of the Hitler’s rhetoric about Jews. This may not be Republican conservatism and clearly not all Republicans are racists and bigots or misogynists, but it surely points to a fascist mind-set.

Will a Trump presidency turn America into a fascist state? That remains to be seen, but one has the uneasy feeling that we have seen this movie before and it does not end well. I’d like to believe with Sinclair that it cannon happen here, but I remain skeptical like him. I’d like to think that the constitutional system does indeed have enough check and balances not to let that happen; that Congress would never allow an enabling legislation to force Muslims to wear badges or force the deportation of millions of Latinos; that the Supreme Court would exercise judicial review and the executive branch would respect any rulings from the court. But I don’t know. I do know, however, that America after 2016 will never be the same. I also know that not all change is for the better; sometimes it is for the worse, as with the Weimar Republic, and that quite often in history the best way to fool people is to change everything so that nothing changes as expressed by Tancredi in the famous novel of Giuseppe di Lampedusa The Leopard.

An international team of astronomers from the University of California San Diego, the Instituto de Astrofísica de Canarias (IAC), and

Davos: Leaders Lay Out Plans For Safeguarding People And The Planet