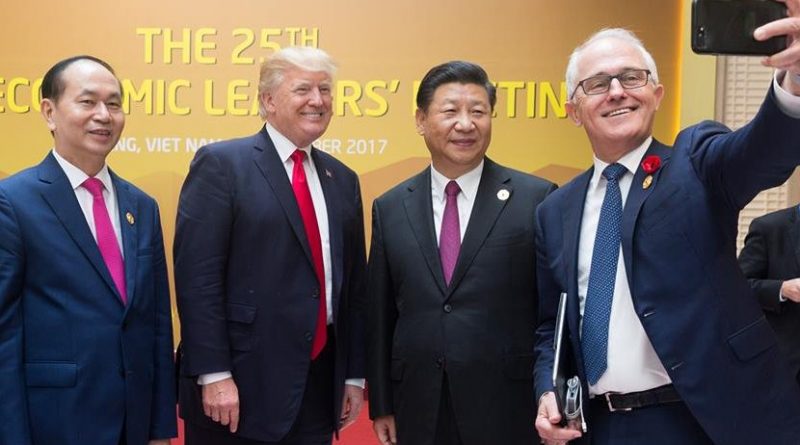 China is luring the region and the world with its ambitions and the US is offering incoherence. This mismatch is at the heart of the present turmoil in the region.

Unites States President Donald Trump’s marathon tour of Asia is in part to assert his global leadership credentials and in part to reassure a nervous region. Ever since he came to power, he has had great difficulty in articulating a coherent policy for Asia, a region where major structural changes are on the anvil. Major powers are rising, old equations are changing, nationalistic leaders are taking centre-stage, and the old normative order is collapsing. The certitudes of the past no longer apply, and so US’ traditional allies are looking askance at Washington’s seeming inability to respond to these challenges.

For far too long, the wider Indo-Pacific relied on the US as the region’s security guarantor. In recent years, that assumption has been challenged like never before. Even Barack Obama initially was quite keen on a G2 with China where he assumed that a global condominium of Washington and Beijing could manage the choppy waters in Asia and beyond. Only after America’s traditional allies — Japan and South Korea — made their displeasure clear, did the Obama administration backtrack. And then of course, Chinese aggression made it impossible to sell this G2 dream to the American elites. The result was a half-hearted ‘pivot’ to Asia, a ‘strategic’ re-balance to the region which was neither strategic nor a re-balance.

As China continued to make headway in consolidating its regional predominance under the imperial ambitions of Xi Jinping, America under Obama and now under Trump remains distracted by its internal debates. At a time when the focus should have been to craft a politically unified policy response to China, the Democrats and Republicans are still sparring over Russia. So not surprisingly, Trump’s Asia trip was being watched carefully with every sign, every word being scrutinised though how seriously one should take Trump’s words remains a mystery.

Trump’s inchoate style has been evident when in Japan he repeated his mantra that the “era of strategic patience” with North Korea was over, underling that large Japanese orders for US-made military equipment will help it counter the threat from North Korean ballistic missiles. A day later, in a significant departure from his earlier rhetoric, in South Korea he suggested that Washington remains open to diplomatic efforts to resolve the standoff with North Korea.

Asia is having a trying time adjusting to these shifts.

Meanwhile, Chinese policy also changes but there is a method in its madness. After South Korea decided to deploy the Terminal High Altitude Area Defense (THAAD) system in July 2016, China lost no time in imposing a series of unilateral sanctions targeting South Korean-based companies. It even encouraged a boycott of South Korean products and tried to limit Chinese tourism to South Korea with some estimates suggesting that an estimated $8 billion loss was inflicted on Seoul’s economy. Days before Trump’s arrival, China reached out to South Korea, calling for a normalisation of ties, including an end to the Chinese boycott. Beijing’s fear was that if not dealt with seriously, Seoul might move in with Tokyo and Washington.

Trump had little leverage as he arrived in Beijing to face Xi. The only concern China has is the possibility of a democratic quad emerging in the region, an idea being promoted by Japan to draw in major democratic powers of the region, such as Australia and the US. Trump’s chaotic presidency fades when compared to seemingly visionary leadership of Xi’s regime. This poses dilemmas for regional states. But the US, under Trump, looks utterly disinterested and, more importantly, incompetent.

So in China, Trump lavished praise on Xi and then in his Apec speech targeted China for “the audacious theft of intellectual property”. So while he harped on his ‘America first’ theology, Xi stressed the importance of globalisation. Given this reality confronting the region, major states in the Indo-Pacific are now beginning to articulate and work on their own responses. So while the Trans-Pacific Partnership is back on the table without the US, the Japanese proposal to revive the quadrilateral involving the US, Japan, India and Australia has got another lease of life.

Regional powers confront an increasingly assertive China and they don’t have the luxury of distance to manage China’s rise. Democratic powers of the region can shape the regional balance of power by working together to preserve the rules based order, one which can enhance the broader regional security and prosperity.

China is luring the region and the world with its ambitions and the US is offering incoherence. This mismatch is at the heart of the present turmoil in the region. Though US secretary of state Rex Tillerson made it clear that the US will “never have the same relationship with China, a nondemocratic society, that we can have with India”, there is still confusion as to how this view will be operationalised in American foreign policy.

New Delhi will have to rely much more on its regional partners and work towards shoring up the regional multilateral order, with or without the US. Otherwise, a real Hobbesian regional order awaits Asia.

Home » An Inconsistent US, An Assertive China And Asia’s Hobbesian Order – Analysis

One thought on “An Inconsistent US, An Assertive China And Asia’s Hobbesian Order – Analysis”