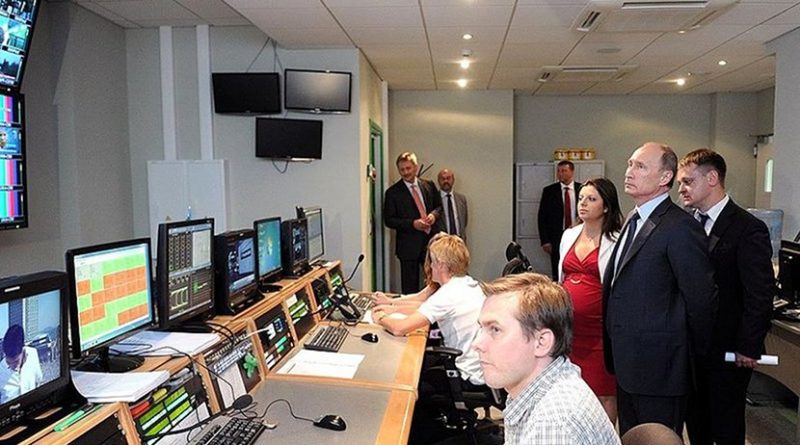 RT’s audience is small, so small that it doesn’t appear on the Nielsen rating service. It is estimated to be viewed by no more than 50,000 people per day. But facts don’t count when the Democrats need to excuse their failures and neocons in both parties want to wage war by any and all means.

The political attack on a news outlet is striking for another reason and that is the near complete absence of support for RT among American journalists. The acquiescence of the usual cohort of civil libertarians and others who think themselves progressive and enlightened is striking. The 21st century McCarthyite campaign has succeeded in convincing otherwise intelligent people that Russia is an enemy. Those who are unconvinced are generally too afraid to speak up. Their fear is legitimate.

RT is the focus of attack precisely because it provides a means of information gathering outside the bounds of corporate media. RT viewers can access a wide variety of viewpoints, including those in opposition to United States and NATO foreign policy. Russian had already been branded as evil, but the claims of interference in the 2016 election and connections to Donald Trump have been effective and provided the perfect cover for promoting United States foreign policy and covering up the Democratic Party corruption and ineptitude which led to Donald Trump’s victory.

The RT attack is not just confined to the United States. A Prague based group called European Values Think Tank has created a list of British and American politicians who have appeared on RT and labeled them “useful idiots” of Russia. European Values Think Tank is funded in part by the United States government and foundations supported by George Soros. In the United Kingdom two Labour members of parliament have asked that a journalist lose his press privileges because he is a frequent guest on RT. That journalist, Marcus Papadopoulos, explained the issue succinctly. “Those in Washington and London who are attacking RT and Sputnik, do so because they and the criminal foreign policies that they support are being exposed by RT and Sputnik for all to see.”

The journalists who work at RT and their guests are paying a high price for asserting their rights to work and to freely express their opinions. Now labeled as dupes, traitors, Putin appeasers and worse, they struggle without support from people who are either true believers in the new McCarthyism or who fear the taint of any Russian connection.

Americans who think themselves progressive are equally guilty in promoting this attack. John Kiriakou was a CIA whistle blower who paid for his honesty with a prison sentence. Now free, he hosts a program on Sputnik. Kiriakou was scheduled to speak on the subject of human rights before the European Parliament. Winnie Wong, co-founder of People for Bernie Sanders, refused to appear on the same panel with Kiriakou, claiming that she didn’t wish to be aligned with Sputnik.

It isn’t clear how sitting next to Kiriakou makes one aligned with his employer but Wong is certainly not alone among the normally high minded latte left. They are just as willing to go along with the surveillance state, the neoliberal consensus and the war party duopoly.

Kiriakou isn’t alone. The Huffington Post pulled a piece written by one of their own writers, Joe Lauria. “On the Origins of Russia Gate ” explained what is easily provable, that the Democratic National Committee paid for the so-called evidence of Russian election interference. The people and organizations claiming to be part of a resistance are nothing but hacks for the Democrats and supporters of the elite consensus for American domination of the world.

There ought to be an outcry of support for RT but instead the FARA decision has been met with either silence or applause. The anti-Russian trope has been executed with perfection. It has been spread by the corporate media and the two party duopoly. The same newspapers and cable news stations providing endless anti-Russian coverage never allow a counter narrative to see the light of day. Experts on Russia whose opinions were once sought out are now completely excluded from media access. Millions of Americans devote their time to news gathering and still know nothing useful about Russia, its role in the world or the truth about their own government’s activities.

RT should be defended by anyone who claims to believe in press freedom, left politics or ordinary fairness. The lack of public defenders is proof of neo-con triumph and the duplicity of people who call themselves liberals. They must be called to account whenever possible. If they are not the imperialists and their war party partners will have won.