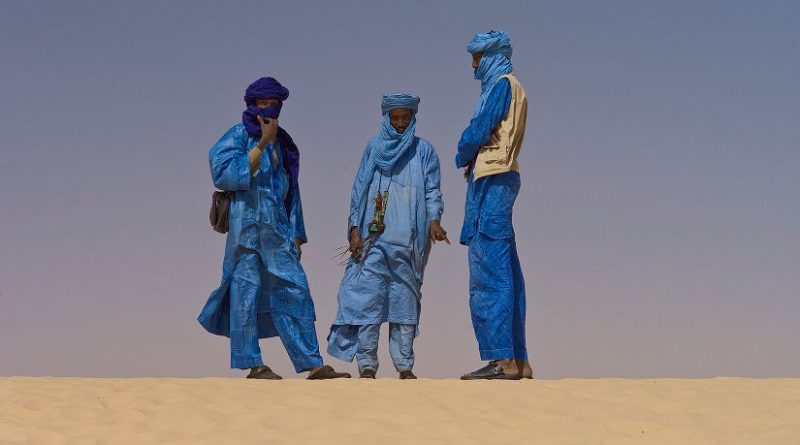 The current crisis in Mali is quite a complicated affair, comprising of a mixture of persistent and fundamental grievances from diverse ethnic groups. Additionally, it now involves the vital interest of global superpowers. France is deploying special military forces in the country under the pretext of protecting civilians from various extremist groups – risking the ‘Afghanistization’ of Mali.

Over the years, the Sahara has seen several ethnic movements against colonization, and industrialization, which have been mercilessly suppressed and uprooted by the superpowers. The Azawad movement by the indigenous Tuareg communities in Mali is one such example.

The Tuareg people have been living in the harsh conditions of the Sahara for millennia. There are about two million Tuareg living in Mali, Niger, Libya, Algeria, and Chad. But the largest population of Tuareg is found in Mali, with an estimated 950,000 people.

Tuareg men wear indigo veils, which gave rise to the popular characterization “Blue Men of the Sahara.” But it is not their beautiful attire which is attracting attention from the world’s superpowers. The Tuareg homeland has the largest energy deposits in Africa. Their dream of an independent state, separation from Mali, and the right to govern their own land, which they called “Azawad,” threatens five neighboring states and has the potential to trigger the biggest war that Sahara has seen in a century.

And they are not the only group who wants to rule here. “Al Qaeda” is also strengthening its roots in the desert with a vital interest of realizing Bin Laden’s dream of creating a new Afghanistan in the Sahara and promoting Sharia law. Mali is left in the middle, as a powder cake of war between the Tuareg rebels and Al Qaeda.

After Mali’s independence from France in 1960, a series of droughts affected the northern cities of Timbuktu, Kidal, and Gao. This is one of the least developed regions of the country, and it’s the homeland of Tuaregs. The present-day state of Mali failed to ensure a holistic and inclusive development across all regions; the northern part was ignored by the government and now finds itself crushed by the ever increasing weight of climate change.

“This is a people with a long history of resistance to centralized rule, from the Roman Empire to Arab conquest and French colonization and then, since 1960, the independent state of Mali,” says Bruce Whitehouse, an anthropologist at the University of Lehigh.

The Tuareg have fought a series of rebellions against colonialism since the 20th century. But they were brutally subdued by colonial France during this period and suffered untold discrimination and exploitation.

There have been four major rebellions since the 1960s. The first Tuareg rebellion took place in 1962-64. During this period, Tuaregs were greatly oppressed by the government of ‘Modibo Keita,’ who came to power after the French departed. At the time, Tuaregs were highly discriminated against and lagged behind others in terms of the distribution of state benefits. To make the situation worse, Keita’s government enacted certain policies on land reform that threatened Tuareg’s access to agricultural products in their own lands.

The second larger rebellion began in 1990. The animosity triggered by harsh repression perpetuated dissatisfaction with government policies. And in the third rebellion, there was no major uprising, but routine kidnapping and killing members of the Malian armed force were reported.

In the 1970s, there were terrible droughts in the Tuareg home region that destroyed their livestock and made it impossible for sustaining their livelihood. So, thousands of Tuaregs left their homeland for Libya, which had oil and employment opportunities. Interestingly, in 1982 Gaddafi declared Libya to be the home country and place of origin of all Tuaregs. Many thousands of Tuaregs were recruited into Gaddafi’s armed forces.

The Rise of the MNLA

In 2011, after the collapse of the Gaddafi regime, Tuaregs who had been part of Gaddafi’s mercenary army returned to northern Mali with sophisticated weaponry. For Tuareg fighters, this was a journey from abundance to misery – they had seen the wealth of Libya, and now suddenly they were back in their home country, plagued with poverty, drought, and disease. They decided to bring peace and prosperity to the region and revive the dying pasture land – their only source of livelihood. They formed the “National Movement for Liberation of Azawad” or MNLA in 2011 as the political-military platform to continue their fight for self-rule.

Just one year after the formation of MNLA, the Tuaregs toppled the Malian government forces in March 2012 and declared the independent state of Azawad in what had been northern Mali. “At the beginning, this was essentially a political movement, but with the return of the Tuareg from Libya it became military as well as political,” remarks Pierre Boilley, a professor of Contemporary African History at the University of Paris.

Colonel Meshkenani Ag Bela of MNLA is the fourth generation of his family to rise up against Mali and its forerunner colonial friends. “We have a deep-rooted and bitter history. We fought French imperial forces until they left. We never accepted French colonialism nor when France gave our land to Mali without our consent. Ever since then we have never stopped struggling. Every decade we start a new rebellion for our rights,” Meshkenani told Al Jazeera.

Declaring independence on 6 April 2012, MNLA spokesperson Mossa Ag Attaher, stated: “Mali is an anarchic state. Therefore, we have gathered a national liberation movement to put in an army capable of securing our land and an executive office capable of forming democratic institutions.”

Nonetheless, the independence declaration proved premature. “Azawad failed because the MNLA wanted a secular independent state. And the Islamists were not interested in that. They just wanted to establish Islamic rule. There is a dynamic at work here where different factions within the Tuareg population have competing agendas. And the micro-politics of the situation is extremely important in determining where their loyalties lie,” said Whitehouse.

Ripple Effects of the Azawad Movement

The Azawad movement came to an end in 2013. The government of Mali and the coordination of Azawad Movements also known as CMA signed the Algerian-brokered peace deal. According to the agreement, the CMA will respect the “unity and territorial integrity of Mali.” The Malian government agreed to implement a more decentralized-system of government, with regional assemblies elected under universal suffrage.

Instead of one single elected assembly, now Azawad will have five – one for each of the area’s regions, which are Timbuktu, Gao, Kidal, Taoudeni and Menaka with the last two to be newly created. The agreement also provides for increased representation of the regions of Azawad in Malian state institutions, along with greater economic investment.

However, all of these promises from Mali for greater political autonomy for the Tuaregs in the north have never materialized. As a result, the Mali government is still facing massive challenges to control the situation in the region and it has thus far failed to develop trust amongst the Tuaregs.

The Birth of New Radical Groups

The MNLA and Al Qaeda are no longer the only radical groups in the region. New armed groups have been emerging in the central regions of Mopti and Segou, and these groups have an entirely different local agenda.

Take for instance the Peul communities, where both pastoralists and sedentary farmers are complaining that their issues are not being addressed properly by the Malian government. “As long as we are not associated with the process, it will be difficult to obtain peace” claims Abdoul Aziz Diallo, president of Tabital Pulaaku, an organization established by the Peul activists.

The National Alliance for the Safeguarding of Peul Identity and the Restoration of Justice, better known as ANSIPRJ, announced its emergence as a military force recently. Similarly, there are also other rebel groups emerging in the central region, including the Macina Liberation Front, which takes its inspiration from the Macina Empire of the 10th century.

For France, stability in Mali is crucial because any uprising in the country threatens French economic interest in neighboring countries such as Niger, Senegal, Burkina Faso, and the Ivory Coast.

Most importantly, Mali’s vital importance to France comes into focus when we take into account the presence of uranium mines in Niger which supply French nuclear power stations, mines which are located along the border between Mali and Niger. It should be noted here that uranium mines in the Niger provide around 50 percent of the raw material for France’s nuclear power plants.

But the presence of U.S. armed forces in Mali is not a big concern for the radical groups operating there. Mali is said to be the most dangerous active deployment for UN troops – 60 UN peacekeepers have been killed in the country so far.

Meanwhile, the heavily armed military presence of the French and U.S. governments in Mali suggests that the battle will go on. It raises certain important questions about how much these global superpowers know about the conflict going on in a foreign country.

Mali has become a model for bad governance: freedom of speech has been denied, and due to the poorly-equipped and incapable army, the country is unable to provide security for its own citizens. Once a leading democracy in West Africa, Mali is becoming an Afghanistan in the Sahel and Sahara regions.

The spokesperson for Ansar ed-Din, Sanda Ould Boumama, told CNN, “The war has only started. We expect more causalities.” After French troops and their allies fought against Islamists rebels for control of Gao, a 30-year-old local resident, Maouloud Dicko, stated that “I am really afraid. You hear of these kinds of things in Pakistan or Afghanistan. Gao is becoming like Pakistan.”

A Ray of Hope?

The superpowers should promote a multi-pronged approach if they have a genuine interest in protecting civilians and restoring peace and stability in this troubled region. But in reality, they are suppressing the voice of ethnic communities and looting the resources, thus giving rise to certain unpleasant questions: France in Mali, controlling or protecting? As per the need of the hour, France should encourage the Sahel states through diplomatic initiatives and adopt a regional approach to fight terrorism and the spread of Islamist extremism in the region.

In order to restore stability in the region, there is a pressing need to create an enabling condition that allows Tuaregs to look after their own situation. Without creating such favorable conditions, dictatorial anti-terrorism strategies led by the French and U.S. governments can further intensify radical uprisings in the region.

The Mali government should also initiate dialogue with Tuareg communities and ensure a holistic approach to address the regional socio-economic and development issues of poverty, injustice, drought, and famine.

The opinions, beliefs, and viewpoints expressed by the authors are theirs alone and don’t reflect any official position of Geopoliticalmonitor.com