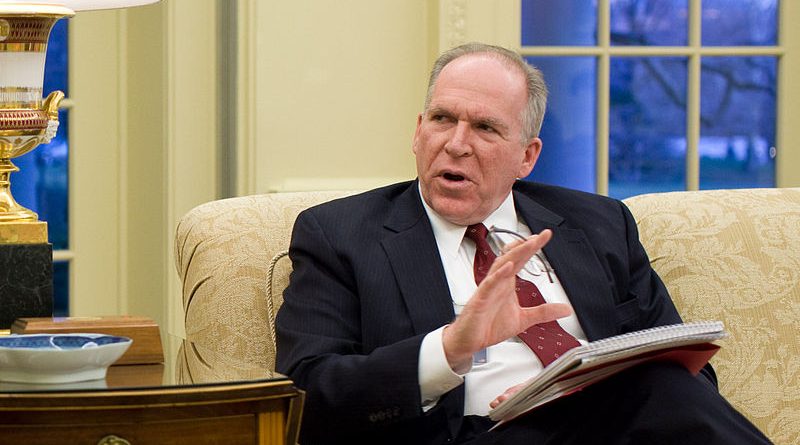 One of the best side effects of the Trump presidency has been the hostility of the so-called “deep state” or “intelligence community” directed at the president.

This, in turn, has led many Americans to realize that America’s powerful, un-elected secret police agencies serve an agenda all their own, and that they choose sides in political controversies. Consequently, polls show one’s views of the CIA and the FBI depend largely on one’s ideological bent. Polls from Fox News and NBC news in recent years show that as various government bureaucracies have ratcheted up their hostility to Trump, more Democrats and Hillary Clinton voters have said they trust the CIA and the FBI.

Why the president and this deep state should be at odds has never been obvious to casual observers. Last month, however, in an article titled “Trump’s War on the ‘Deep State’ Turns Against Him,”the New York Times at last explained that there is indeed very real enmity between Trump and agencies such as the CIA and the FBI. The Times contends that Trump “went to war with the professional staff” of the intelligence agencies and the State Department.

The Times notes Trump has condemned “deep state bureaucrats,” and claims Trump’s “hostility toward government was strong from the start. He blamed the leak of the so-called Steele dossier of unverified allegations against him on intelligence agencies and never trusted their conclusion that Russia intervened in the 2016 election on his behalf.”

Trump was right to be defensive, of course. But that controversy over Russia was never really about what the Russians were up to. The focus was always largely about how much Trump colluded with the Russians to win the 2016 election.

Ultimately, the evidence was so non-existent, that after a nearly-three-year investigation, Robert Mueller was unable to establish evidence of collusion between Trump and the Russians. As Glenn Greenwald has noted: “not a single American  — whether with the Trump campaign or otherwise — was charged or indicted on the core question of whether there was any conspiracy or coordination with Russia over the election.”

But this lack of evidence did not stop John Brennan, for example, from claiming for months that he had special secret knowledge of the matter, and that Trump — or at least many around him — were going to be indicted for colluding with the Russians.

Although Brennan is a “former” CIA director, he nonetheless clearly remains well ensconced within the world of his fellow spooks. He is, as ABC News correspondent Terry Moran put it, “cloaked with CIA authority.” Brennan even insisted that he ought to retain his security clearance, presumably forever, even though he is accountable to no one. Such is the mindset of the deep state bureaucrat. They live in a world where they deserve special privileges just for being government employees.

Moreover, Brennan has been joined in his attacks on the president by other former high-ranking members of the deep state, including former FBI chief James Comey and former Director of National Intelligence James Clapper.

Those currently employed by the deep state have joined the anti-Trump campaign as well. Much of the current campaign against Trump is likely being fed by by CIA agents, and according to Sen. Rand Paul on Wednesday, CIA analyst Eric Ciaramella is supplying much of the prosecution’s information. Alexander Vindman, an Army officer and bureaucrat with the National Security Council, has testified to Congress in order to fuel impeachment efforts against the president as well.

But what is especially problematic for him is the fact that so many of his critics coming out of the bureaucratic woodwork are from intelligence agencies and from the military.

Unfortunately, in the United States there is a well-established bias in favor of employees from national security agencies. Even the very language used by the media speaks to this favoritism. In the Times piece, for example, the authors speak of one of Trump’s critics, one “William B. Taylor Jr., a military officer and diplomat who has served his country for 50 years.” Note the implied selflessness of Taylor’s work. An equally accurate description of Taylor would be “he was employed by government agencies for fifty years” or “the taxpayers paid his bills for fifty years.” Instead, we’re told he “served his country.” The propaganda value of the media’s pro-military bias is not lost on the officers themselves, and it’s no surprise Vindman, a Lt. Colonel, testified to Congress in his military uniform.

Other examples can be found every time Trump fires a lifelong bureaucrat from the upper echelons of the various “national security” agencies. For example, last summer, when Trump fired director of national intelligence Dan Coats, the Atlantic portrayed Coats as a principled idealist who “spoke truth to power.” Coats was fired, the author tells us, because of his devotion to the truth, even if it undermined Trump’s agenda. The best proof of Coats’s honest determination, we’re told, was the fact he “won praise from former intelligence officials.”

In real life, of course, Coats is a lifelong politician and bureaucrat who prior to his dismissal had collected a government paycheck for four decades. As a politician he lobbied for gun control and supported the disastrous 2003 Iraq War. He trashed the constitutional right of habeas corpus. Like James Comey, Coats defended and sought to hide the government’s use of torture. The idea that his post-Congressional career was marked by dogged devotion to the truth ought to strike one as rather fanciful.

But even the New York Times is no longer pretending that the deep state doesn’t exist, and that it doesn’t have its own political agenda. In fact, as noted by Robert Merry at the American Conservative, the Times article even “portray[s] the current impeachment drama as the likely denouement of a struggle between the outsider Trump and the insider administrative forces of government.”  This is especially significant since it is also increasingly clear that, “American foreign policy has become the almost exclusive domain of unelected bureaucrats impervious to the views of elected officials — even presidents — who may harbor outlooks different from their own.” Merry concludes the past three years of investigations of the president, conducted by government bureaucrats, is “the story of entrenched government bureaucrats and a president who sought to curb their power. Or, put another way, the story of a president who sought to rein in the deep state … that sought to destroy his presidency.”

Some of these deep-state agents even admit their willingness to subvert the official chain of command to suit their own purposes. Vindman, for example, told the impeachment committee he actively sought to subvert Trump administration relations with the Ukrainian government largely to preserve Vindman’s own vision for American policy. In the mind of this mid-level bureaucrat, American foreign policy is set not by elected officials in Washington DC, but by the bureaucrats themselves.

Why Take the Administration’s Side?

Back in 2017, the battle lines between Trump and the deep state were already being drawn, and at the time I wrote:

This isn’t to say that Trump is the “good guy” here. As with the US military establishment overall, the deep state is by no means monolithic. Like any group of self-serving institutions, there are competing factions. Trump clearly has allies within some areas of the deep state, as can be reflected in Trump’s attempts to massively expand military spending at the expense of the taxpayer.

But the fact he’s considered an outsider in Washington by so many should suggest there are reasons to support him over the entrenched bureaucracy.

Indeed, as Greenwald pointed out in a 2017 interview, it’s not a coincidence that former and current members of the deep state clearly preferred Clinton to Trump during the campaign. The deep state bureaucrats prefer an insider like Clinton who who can be trusted to not upset the national security status quo in any way.

Although Trump is no true friend of peace or human rights, he commits his sins largely out in the open. As such, his presidency is relatively transparent, and Greenwald prefers that to the hidden (and extensive) crimes of the deep state.

After all, deep-state agencies face virtually no scrutiny of — and even less real opposition to — their many misdeeds. These, of course, are so numerous as to be impossible to list. But just for starters we might refer to a 2017 article by Sharyl Attkisson in The Hill titled “10 times the intel community violated the trust of US citizens, lawmakers and allies.” It’s a laundry list of illegal, immoral, and blatantly unconstitutional acts which well illustrate the near total impunity with which these agencies operate. Abuse of spying powers is so rampant within the FBI, for example, that even the lopsidedly pro-spying FISA court was forced to conclude the FBI routinely overstepped the bounds of legal surveillance. And, of course, without the heroic whistleblowing of Edward Snowden, the NSA would still be falsely insisting that it doesn’t routinely spy on virtually all Americans, whenever and however it likes.

In response to these facts, one might still insist “but presidents lie a lot and break laws too!” That’s true, but the difference between presidents and deep-state bureaucrats is well illustrated by the current impeachment controversy. It’s the president who’s facing indictments, public attacks, and the prospect of removal. On the other hand, the deep-state bureaucrats who oversee many counts of corruption, illegal spying and leaking, remain safely hidden from public view. Those who routinely lie, deceive, and abuse their power often go on doing so for decades. As the years pass, they become ever more entrenched in the federal bureaucracy, invisible to the public, and — as we are now seeing — often answerable to no one.

Presidents come and go, and they often face fierce opposition from the other party or from the media. The deep state, meanwhile, is said to be full of national heroes who “serve their country” and “speak truth to power.”

It should be easy to see, in the battle between the president and the deep state, which side is the most dangerous.