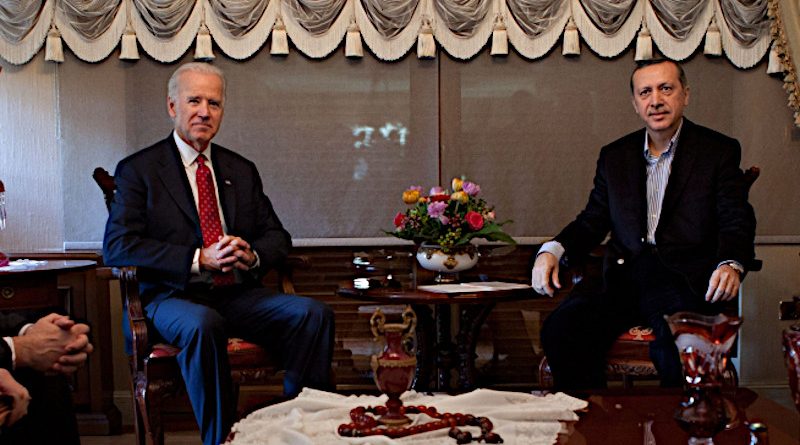 The era when Turkish President Recep Tayyip Erdogan had easy access to US President Donald Trump is coming to a close. President-elect Joe Biden, in the early stages of his election campaign, warned that dark clouds were overshadowing Turkey-US relations, saying “Turkey is the real problem” and that “Erdogan will pay a heavy price.”

The list of outstanding issues between the two countries is long, but the most important ones are the purchase by Turkey of a Russian-manufactured air defense system, Turkey’s expulsion from the F-35 superfighter program, the Kurdish problem, the Halkbank court case, and the extradition of the Turkish cleric Fethullah Gulen.

Turkey’s purchase of the Russian-manufactured air defense system S-400 has been the subject of harsh criticism for more than a year in the US. There is a bipartisan consensus in both houses of Congress to impose CAATSA (Countering America’s Adversaries Through Sanctions Act) measures on Turkey for this purchase. Trump has persistently stalled the implementation of these measures.

Despite the strong US objection, Turkey rightly says that it needs an air defense system. It opened a tender and the lowest compliant bidder was Russia and so the system was purchased. The money has already been paid, the hardware has been delivered, and the first tests have already been carried out. Therefore, Turkey considers this a done deal.

The US objection to the purchase is based on claims that the S-400 may identify weaknesses in the US-manufactured F-35 superfighters. This claim does not hold because there is no need to deploy the S-400 in Turkey to identify its weakness. If there is in fact a weakness, this could be identified when the system is deployed outside Turkey as well.

Another claim by the US is that there should not be a Russian-manufactured air defense system in a NATO country’s inventory. This claim does not hold either, because there is another version of the Russian-manufactured air defense system in Greece, the S-300. Ankara questions why it causes a problem in Turkey but not in Greece.

Ankara has already formally announced its intention to purchase 100 F-35 fighters. The manufacture of one of the aircraft destined for Turkey has already been completed. Turkish pilots have been trained to fly them, but after the S-400 purchase the US decided to expel Turkey from the co-production. Apart from the military and diplomatic aspects of the question, there are also commercial, legal and financial dimensions that have to be sorted out.

The Kurdish problem is one subject that Biden has been discussing with Erdogan since he was vice president in the Obama administration. During his own presidential campaign, Biden continued to criticize Trump’s tolerance in letting Turkish troops enter Kurdish-controlled Syrian territory. He also criticized Turkey’s attitude to limiting the activities of Kurds whom the US is supporting, financing, training and equipping.

One of the biggest headaches for Turkey may be Trump’s reported intervention in a legal process regarding the role of a Turkish state-owned bank, Halkbank, in circumventing the US embargo on Iran. An article published in The New York Times on Oct. 29 by Eric Lipton and Benjamin Weiser revealed new facts that were partly unknown to many in Turkey.

The authors claim that Turkey had been pressing President Trump to quash an investigation, which threatened not only the Halkbank but a slew of political figures in Turkey.

The article says that, to the great surprise of the top federal prosecutor in Manhattan, Geoffrey Berman, US Attorney General William P. Barr asked him to stall the investigation into Halkbank. He said that the Justice Department would agree to end the investigations and criminal cases involving the Turkish bank and its officials who had connections with political figures in Turkey. If Biden opens this file, it may cause a political tsunami in Turkey.

Despite this gloomy picture, Turkey and the US are NATO allies. Turkey has the second largest army in NATO after the US. They have several areas of common interest. There are missiles with nuclear warheads stored in Turkey. Whether Washington likes it or not, Ankara is an important player in the Middle East. Thus despite the incoming Biden administration’s misgivings about Erdogan, the two countries will probably find common ground to protect their reciprocal interests.