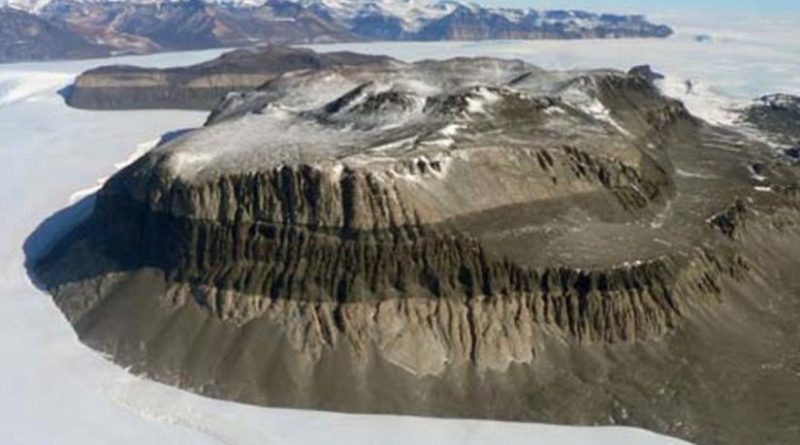 Antarctica's Friis Hills in the central Dry Valleys of the eastern portion of the continent contains ancient lake deposits indicating that the area has remained frozen for 14 to 17.5 million years. Credit University of Pennsylvania

Antarctica was once a balmier place, lush with plants and lakes. Figuring out just how long the continent has been a barren, cold desert of ice can give clues as to how Antarctica responded to the effects of past climates and can perhaps also indicate what to expect there in the future as Earth’s atmospheric concentration of carbon dioxide grows.

In a new study in Scientific Reports, University of Pennsylvania researchers use an innovative technique to date one of Antarctica’s ancient lake deposits. They found that the deposits have remained frozen for at least the last 14 million years, suggesting that the surrounding region, the East Antarctic Ice Sheet, or EAIS, has likewise remained intact.

The work adds new support for the idea that the EAIS did not experience significant melting even during the Pliocene, a period from 3 to 5 million years ago, when carbon dioxide concentrations rivaled what they are today.

“The Pliocene is sometimes thought to be an analog to what Earth will be like if global warming continues,” said Jane K. Willenbring, an assistant professor in the Department of Earth and Environmental Science in Penn’s School of Arts & Sciences. “This gives us some hope that the East Antarctic Ice Sheet could be stable in today’s and future climate conditions.”

Willenbring collaborated on the study with lead author and Penn graduate student Rachel D. Valletta, as well as Adam R. Lewis and Allan C. Ashworth from the University of North Dakota and Marc Caffee from Purdue University.

Current climate change projections indicate that the marine portion of the West Antarctic Ice Sheet is “a goner,” Willenbring said. Studies from the past few years suggest that sea level will likely rise a few meters as that ice melts. But the East Antarctic Ice Sheet is 20 times more massive. If it melted, the ensuing sea level rise would be even more catastrophic than the western peninsula’s dissolution.

To shed light on what could happen in the future to the EAIS, geologists often look to the past. But there is not a scientific consensus about how the EAIS has behaved in different climates throughout history. Some scientists believe the ice sheet experienced significant melting during the relatively warmer conditions of the Pliocene, while others think it has remained almost entirely frozen for the last 14 million years.

Willenbring and colleagues hoped to help clarify the history of the EAIS. They traveled to Antarctica’s Friis Hills in the central Dry Valleys of the eastern portion of the continent. About a foot beneath the surface are sediment deposits from an ancient lake which is known from animal fossils to have been freshwater. Earlier dating established that the volcanic ash deposits at the bottom of the ancient lake are 20 million years old.

To see if any melting had occurred in the interim, they analyzed radioactive isotopes of beryllium known as beryllium-10, which form in the atmosphere when cosmic rays collide with oxygen and nitrogen atoms.

“Beryllium-10 sticks on to particles quite easily and is associated with lake deposits,” Willenbring said. “We wanted to see if we could use this isotope to figure out how long the sediment was in place and isolated from liquid water.”

Beryllium-10 has a known half-life of 1.4 million years. After estimating an initial level of initial concentration of beryllium-10 in their lake samples, the researchers were able to estimate the age of the sediments to be between 14 and 17.5 million years ago.

“We found that the beryllium-10 was almost completely gone, within the resolution of our technique,” Willenbring said.

Willenbring said the team was confident that the area had remained frozen since then because if there had been melting, the water would have penetrated the sediments and “reset” the beryllium-10 measurements.

“This means that the sediment is definitely older than the time when a lot of people think that Antarctica might have been quite deglaciated,” she said.

By offering support for the idea that the EAIS has been largely stable during the last 14 million years, the research offers some hope that a massive collapse of the ice sheet, and associated sea level rise of tens of meters, may not be imminent.

Willenbring, however, cautions that even though carbon dioxide levels in the Pliocene may be analogous to today’s levels, the two situations are not equivalent and thus any conclusions can only be taken so far.

“Even though the Pliocene conditions could be an analog for CO2 concentrations today, we’ve probably never experienced such a fast transition to warm temperatures as we’re seeing right now,” she said.