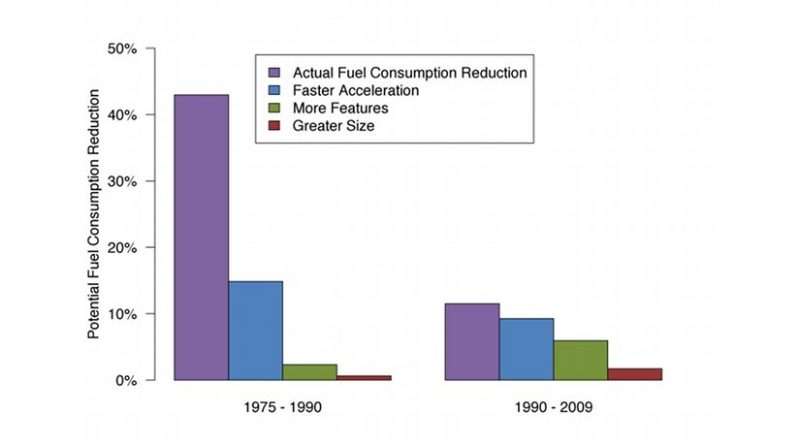 From 1975 to 1990, most of the benefit from fuel saving technologies went towards making cars more fuel efficient. From 1990 to 2009, a greater share of those potential savings were cancelled out by changes that made cars faster, bigger or more luxurious. Credit University of Washington

To hold up its end of the landmark climate deal signed in Paris last week, the U.S. will need to make cars and trucks of the future far more fuel efficient.

Its commitment to reduce carbon pollution relies — in part — on fuel economy standards enacted by the Obama administration that aim to increase the fuel efficiency of cars and light trucks to the equivalent of 54 miles per gallon by 2025.

New research from the University of Washington and the Massachusetts Institute of Technology shows that automakers won’t meet those goals if they continue on the path they have followed for the last two decades. But when faced with another turning point in the nation’s energy future, the industry was previously able to deliver sufficient levels of innovation and ingenuity.

Fuel efficiency gains enabled by new technologies developed after the 1970s energy crisis outpace what would be necessary to meet the newer federal regulations, according to a paper published last month in a special issue of the journal Applied Energy on clean transport.

The UW research quantifies fuel efficiency improvements from 1975 to 2009 by combining econometric and engineering analysis to provide a new and more complete accounting of those gains.

“We wanted to understand how ambitious and challenging the newer fuel economy standards are, compared to what the automotive industry has been able to deliver historically,” said lead author Don MacKenzie, UW assistant professor of civil and environmental engineering.

“It’s within the realm of what we’ve done before, just not recently. It’s asking for a return to the rate of innovation the industry was able to deliver in the 1970s and 1980s. But it’s not beyond that,” MacKenzie said.

Since 1975, the U.S. has sought to reduce energy consumption through Corporate Average Fuel Economy — or CAFE — standards that mandate how fuel efficient new cars and trucks must be. To meet more aggressive standards enacted by the Obama administration without sacrificing capabilities that consumers have come to expect, technology must improve quickly enough to reduce fuel consumption by 4.3 percent per year from 2011 to 2025.

The new analysis found that from 1975 to 1990, new technologies and manufacturing advances could have reduced the per-mile fuel consumption of new cars in the U.S. by 5 percent each year.

In reality, they only improved by 4 percent because automakers also focused on improving acceleration times, adding new features and making other tradeoffs that cause cars to guzzle more gas.

From 1990 to 2009, the rate of technological innovation slowed considerably. Advances could have improved per-mile fuel consumption by 2.1 percent per year, but the actual gains were closer to 0.7 percent per year.

The UW analysis did not investigate why the shift occurred, but high gas prices and increases in federal CAFE standards throughout the 1970s and 1980s provided both a market and a regulatory incentive for auto manufacturers to reduce fuel consumption.

Previous studies that attempted to quantify these historic fuel savings haven’t fully captured how engineering and manufacturing advances during that time period — such as front wheel drive, the use of lighter materials and modern construction techniques that shave weight — contributed to fuel efficiency gains, MacKenzie said.

“This is not the first paper that’s tried to answer this question, but other studies have only measured a portion of the improvements,” MacKenzie said. “Our contribution is that we feel like we have a more comprehensive measure of efficiency improvement, and we did that by combining statistical and economic approaches that have been used in the past with engineering analysis.”

MacKenzie said there are newer technologies available today or on the horizon — from lightweight materials and composites to more efficient transmission and engine technologies — that the industry can exploit to achieve further gains.

That may seem challenging, he said, but making the overwhelming majority of cars front wheel drive probably didn’t seem trivial in the 1970s.

“In retrospect, these things look like low-hanging fruit, but that doesn’t mean they were easy,” he said. “What this paper shows is that the business-as-usual improvements of recent years are not going to be adequate. These standards through 2025 are not asking the auto industry to keep doing what they’re doing but focus a little more on fuel economy. But it’s clearly within the range of what’s been done before.”