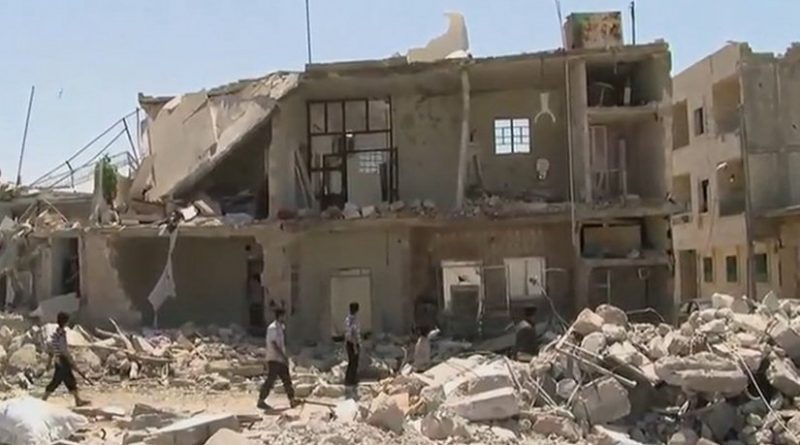 Assad’s army, backed by Russian and Iranian allies, has recaptured the city of Aleppo, which might be a major victory for President Assad in Syria’s six-year-long civil war. It is not the same city the rebels and the regime were first fighting for. It has dramatically changed. Much of it has become in ruins. Much of it has been lost. Most of its people have been traumatised as thousands have died and many more have been detained or displaced. Nothing seems to be real for the people in Aleppo except the sound of war. Aleppo, as it was before the civil war, has become a memory.

Demonstrations erupted across Syria in April 2011, turned into a civil war in some areas by the end of that year, and then exploded into Aleppo in the end of summer of 2012, when rebel fighters took over the east of the city.

On one hand, the rebels hoped their march into Aleppo would be the beginning of the end for President Bashar Al-Assad. On the other, the Assad regime vowed to swiftly drive them out of the city. Neither side achieved their goals. An ugly series of violent transgressions on both sides have become commonplace in Aleppo, while civilians have been the ones to pay the price every time.

“Aleppo was liberated thanks to a coalition between Iran, Syria, Russia and Lebanon’s Hizbollah,” said Seyed Yahya Rahim-Safavi, one of Khaminei’s military commanders.

“Iran is on one side of this coalition which is approaching victory and this has shown our strength. The new American president should take heed of the powers of Iran.”

Are You Incapable of Shame?

Addressing an emergency meeting of the UN Security Council on Syria, the US ambassador to the United Nations, Samantha Power, has accused Syria, Iran and Russia of carrying out barbaric “crimes” in Aleppo. Using a very strong language, Power tells the Security Council that Assad government and its allies Russia and Iran bear responsibility for killing civilians in Aleppo.

“To the Assad regime, Russia and Iran, your forces and proxies are carrying out these crimes, your barrel bombs and mortars and air strikes have allowed the militia in Aleppo to encircle tens of thousands of civilians in your ever-tightening noose.

“It is your noose. Three member states of the UN contributing to a noose around civilians. It should shame you.

“Instead, by all appearances it is emboldening you. You are plotting your next assault.”

“Is there literally nothing that can shame you?”

“Is there no act of barbarism against civilians, no execution of a child that gets under your skin? That just creeps you out a little bit? she asks. “Is there nothing you will not lie about, or justify?”

Russia’s UN envoy Vitaly Churkin responded by accusing the US of creating ISIS as a result of US-UK intervention in Iraq.

“We are tired of hearing the lamentations of our American colleagues … that the hostilities [in Aleppo] should stop and that Russians are willing to do so only after having an agreement on corridors [for opposition fighters to leave],” said Russian Foreign Minister Sergey Lavrov.

Russian Defense Ministry spokesman Major General Igor Konashenkov said that “All of the statements by high-ranked Western officials, which cite so-called ‘reports by the activists,’ as well as ‘flicks,’ showing alleged ‘Russian bombardments,’ ‘executions’ and other stuff are staged videos, produced by special film crews formed by militants”.

Rejecting claims that 250,000 civilians (100,000 children) were trapped in eastern Aleppo, Konashenkov asserts that “the Syrian troops’ operation to liberate the eastern parts of Aleppo is successful and humane in every sense in regard to civilians.”

“Don’t ever fall for terrorist propaganda,” he advises.

Messages have been sweeping the Internet from inside the besieged eastern part of Aleppo pleading for the international community to save non-combatants from what they described the arbitrary executions by Assad forces.

Head of the White Helmets, Raed Saleh, sends a message about the approximately 100,000 civilians trapped in eastern Aleppo.

“For the past four years, we the Syria civil defence (or White Helmets), have saved thousands of lives in Aleppo. In the last few days we can no longer even count the dead.

“About 100,000 civilians are trapped in besieged eastern Aleppo in a rapidly shrinking space – less than a few square kilometres. On Tuesday [13 December], they went through hell – people were shot on sight and hundreds of children were trapped in the crossfire. Hundreds of people remain crammed into small spaces, meaning any new direct strike will hit dozens if not hundreds of people. Bodies are lying on the ground where they have fallen or trapped under the rubble. Civilians have been sheltering underground for days. Without a safe passage, death or detention seem to be the only way out of this nightmare.”

The Syrian regime and its allies, as claimed by Saleh, have been systematically targeting journalists, teachers, doctors and nurses for years and are the first ones to face detainment or execution.

“Aleppo’s humanitarians are calling for safe passage for all civilians, and those that serve them, out of Aleppo,” pleaded Saleh.

On 13 December 2016, the international medical humanitarian organization Doctors Without Borders/Médecins Sans Frontières (MSF) expressed their outrage over the unremitting violence directed against civilians in the city of Aleppo and the unresponsiveness of those who can stop it.

“This is one of the worst crises MSF has witnessed in years,” said Teresa Sancristoval, head of MSF’s emergency unit for Aleppo.

“We remind all sides that even war has rules. It is paramount that all parties allow people to flee to safety, allow the evacuation of the sick and wounded, and facilitate the protection of, and humanitarian assistance to, those who are caught on the front lines.”

According to the MFS, “all negotiations to secure access by the United Nations (UN) and other groups—including MSF—to provide humanitarian assistance in the besieged areas of eastern Aleppo have failed. In most cases, people were not provided the chance to flee.”

Once Upon a Time There Was a City Called Aleppo

Before Syria’s civil war struck Aleppo, it was one of the most vibrant centres with its long heritage of ancient landmarks in the country. Great sections have been destroyed by conflicting parties in a shameful vie for territorial power: “Sections of the medieval souq, or market, have been ruined or burnt down, and the 11th century minaret at the Umayyad mosque was destroyed three years ago,” according to various reports. Once Syria’s largest city, Aleppo has been the worst-hit and marred by war.

Now Aleppo has turned into a symbol of action and inaction.

This article appeared in Mashreq Politics and Culture Journal.