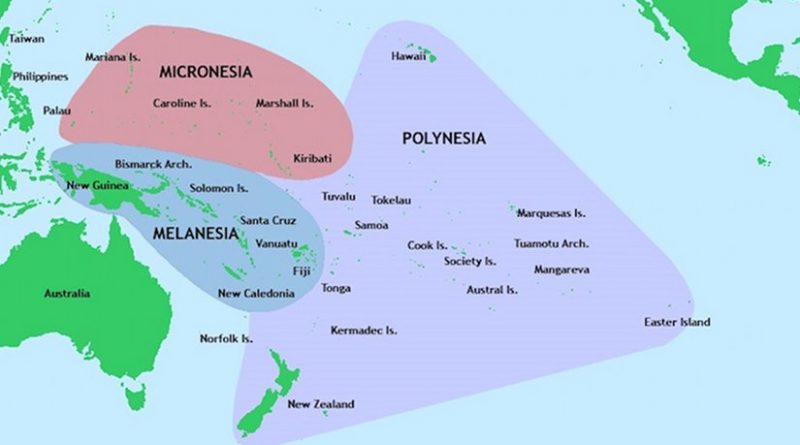 Three of the major groups of islands in the Pacific Ocean. Credit: Wikimedia Commons

With sea levels rising rapidly across the South Pacific and the resulting movement of people within and across countries, the region is facing a new problem of a lack of proper migration policies to address the issue, according to experts.

Inhabitants of artificial islands in the Soloman Islands are migrating to settle in the bigger islands because of sea-level rise and coastal inundation.

University of the South Pacific’s (USP) Director of the Oceania Centre for Arts, Culture, and Pacific Studies Dr David Gegeo said another reason for the sinking artificial islands was that its coral foundation was crashing as a result of overpopulation.

“The artificial islands are built on corals, and when people heavily built on it because of the rise in population, the corals died over the centuries, forcing the islands to sink underwater,” he said. “So this may be another scenario causing people to migrate to the mainland.”

Early migration to the artificial islands was due to security reasons. Sickness was another reason. Those days there was no cure for sicknesses like malaria, so people chose to settle in the (safety of) artificial islands, said Dr Gegeo.

USP student Aloysius Walekwate, who was raised on one of the artificial islands, said changes to these islands had become obvious. “One thing noticeable nowadays are the giant tides – high-tides that are abnormal,” he said. “When they come in, they flooded the islands, but luckily the houses are built high. So people are building higher sea-walls to withstand waves coming in.”

Walekwate said inhabitants’ activities also contribute to the sea-level rise. “When people collected stones and rocks from the outside reefs to build the islands, they are also overharvesting and exploiting the marine resources, so there is also scarcity of seafood causing people to migrate out,” he said.

University of Bonn’s legal expert Dr Cosmin Corendea said governments of the smaller island countries should listen to the people and communities directly affected. He said much more needed to be done to prevent a humanitarian crisis.

“We need to think of the measures and we need to take action before it happens,” said Dr Cosmin. He added that traditional knowledge had a large role to play in working with international organisations to design suitable housing.

Meanwhile, a recent UN survey found that a majority of the people in Tuvalu and Kiribati – two of the islands greatly affected by rising sea levels – would look to leave their homelands if the effects of climate change worsened.

Dr Corendea, whose research looks into this issue, warns that there are no regional or national policies in the Pacific Islands that look into climate change migration.

“Pacific states did not think (yet) of having national law which addresses migrants based on environmental degradation,” he noted. “They have disaster assistance and other legal documents, which may be interpreted as assisting migrants in contexts of climate change, but none of the states in the Pacific have a migration policy.”

From a legal perspective though, there are no climate refugees”, said climate change scientist Dr Eberhard Weber. “The Convention on Refugees from 1951 only protects people that are persecuted by political reasons,” he added. “The convention does not include climate or environmental change.”

But Dr Corendea said forced migration and displacement are recognised at the regional level in the Strategy for Climate change and Disaster Resilient Development.

And, according to the Paris Climate Talks United Nations University Institute for Environment and Human Security (UNU-EHS) expert, Dr Koko Warner, the internal migration of people from outer islands to the urban centres or mainland was not a durable long-term solution.

So what can be done to help those who are adversely affected by climate change and are forced to migrate?

Dr Corendea said the best way was to have a regional body that specifically focuses on such matters. This would serve as an independent body where people could seek redress if they were unhappy with decisions made at the national level.

“The body would be like a court (like those in France and America) where people could go and appeal that they were unhappy with the decision made by a country on grating them a refugee status,” he said.

He added that the focus on regionalism made sense because it was far more effective than the global bodies.

“I solely emphasise on regionalism because it has a history behind it and it has worked in other parts of the world,” said Dr Corendea. “The regional mechanisms from Asia and America worked better than the global mechanisms.”

However, Dr Weber said the best way to help people who were displaced because their homes were uninhabitable was to give them a good education and upskill them in order to fill the skill shortages in developed nations