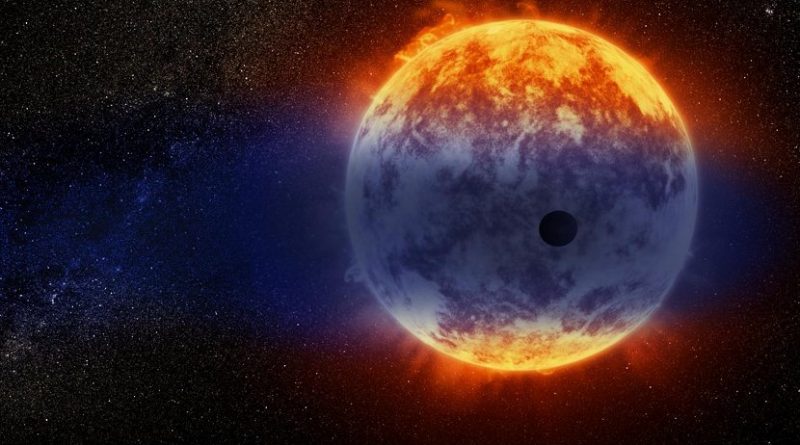 This artist's illustration shows a giant cloud of hydrogen streaming off a warm, Neptune-sized planet just 97 light-years from Earth. The exoplanet is tiny compared to its star, a red dwarf named GJ 3470. The star's intense radiation is heating the hydrogen in the planet's upper atmosphere to a point where it escapes into space. The alien world is losing hydrogen at a rate 100 times faster than a previously observed warm Neptune whose atmosphere is also evaporating away. Credit: NASA, ESA, and D. Player/STScI

The speed and distance at which planets orbit blazing stars can determine each planet’s fate–whether the planet remains a longstanding part of its solar system or evaporates into the universe’s dark graveyard more quickly.

In their quest to learn more about faraway planets beyond our own solar system, astronomers discovered that a medium-sized planet roughly the size of Neptune, GJ 3470b, is evaporating at a rate 100 times faster than a previously discovered planet of similar size, GJ 436b.

The findings, published in the journal of Astronomy & Astrophysics, advance astronomers’ knowledge about how planets evolve.

“This is the smoking gun that planets can lose a significant fraction of their entire mass. GJ 3470b is losing more of its mass than any other planet we seen so far; in only a few billion years from now, half of the planet may be gone,” said David Sing, Bloomberg Distinguished Professor at Johns Hopkins University and an author of the study.

The study is part of the Panchromatic Comparative Exoplanet Treasury (PanCET) program, led by Sing, which aims to measure the atmospheres of 20 exoplanets in ultraviolet, optical and infrared light, as they orbit their stars. PanCET is the largest exoplanet observation program to be run with NASA’s Hubble Space Telescope.

One particular issue of interest to astronomers is how planets lose their mass through evaporation. Planets such as “super” Earths and “hot” Jupiters orbit closer to their stars and are therefore hotter, causing the outermost layer of their atmospheres to be blown away by evaporation.

While these larger Jupiter-sized and smaller Earth-sized exoplanets are plentiful, medium Neptune-sized exoplanets (roughly four times larger than Earth) are rare. Researchers hypothesize that these Neptunes get stripped of their atmospheres and ultimately become smaller planets. It’s difficult, however, to actively witness them doing so because they can only be studied in UV light, which limits researchers to examining nearby stars no more than 150 light-years away from Earth, not obscured by interstellar material. GJ 3470b is 96 light-years away and circles a red dwarf star in the general direction of the constellation Cancer.

In this study, Hubble found that exoplanet GJ 3470b had lost significantly more mass and had a noticeably smaller exosphere than the first Neptune-sized exoplanet studied, GJ 436b, due to its lower density and receipt of a stronger radiation blast from its host star.

Sing’s team estimates that GJ 3470b may have already lost up to 35 percent of its total mass and, in a few billion years, all of its gas may be stripped off, leaving behind only a rocky core.

“We’re starting to better understand how planets are shaped and what properties influence their overall makeup,” Sing said. “Our goal with this study and the overarching PanCET program is to take a broad look at these planets’ atmospheres to determine how each planet is affected by its own environment. By comparing different planets, we can start piecing together the larger picture in how they evolve.”

Looking forward, Sing and the team hope to study more exoplanets by searching for helium in infrared light, which will allow a greater search range than searching for hydrogen in UV light.

Currently, planets, which are made largely of hydrogen and helium, can only be studied through tracing hydrogen in UV light. Using Hubble, the upcoming NASA James Webb Space Telescope (which will have a greater sensitivity to helium), and a new instrument called Carmenes that Sing recently found can precisely track the trajectory of helium atoms, astronomers will be able to broaden their pursuit of distant planets.