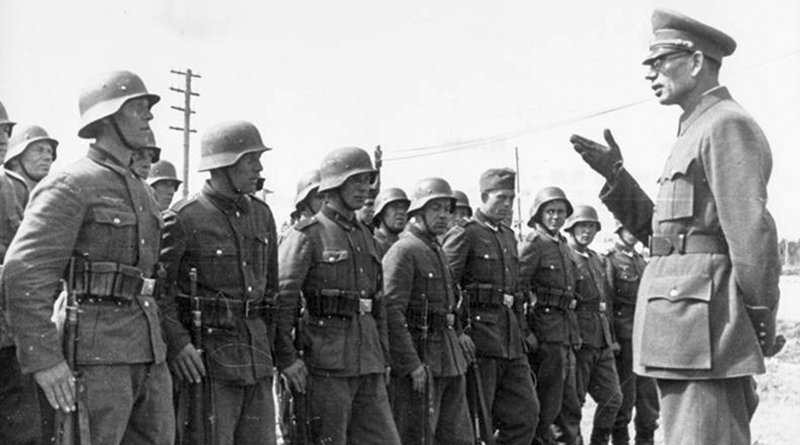 The largely US government funded RFE/RL is headquartered in Prague. With this in mind, it’s a bit surprising to see that RFE/RL lagged behind the San Diego based One America News Network (OANN) and English language Czech blogger Leoš Tomíček, in covering the recent spat between some in the Czech Republic and Russia, over the legacy of the WWII era, anti-Soviet Russian Liberation Army (Russkaya Osvobitel’naya Armiya – POA, Russian Cyrillic alphabet abbreviation, with ROA being the utilized English language short form).

In the last week of November, OANN ran a segment on this matter. (Pardon me for not having an available transcript.) Within reason, Tomíček’s commentary of November 26 and 27, depicts a bombastic local Czech politician Pavel Novotný, using the ROA as a tool against the Russian government. Over the course of time, Tomíček has generally taken a pro-Russian and anti-Soviet position.

Novotný supports a monument to honor the ROA, for its contribution in liberating Prague from the Nazis. Such a commemoration (more than one) already exists in Prague as noted in a December 3, RFE/RL video.

A good number of people in post-Soviet Russia, as well as elsewhere have a negative impression of the ROA – a view which isn’t shared by some others including the Russian Orthodox Church Outside Russia (ROCOR) and Aleksandr Solzhenitsyn. After the Soviet dissolution, Solzhenitsyn returned to Russia, where he lived for the remainder of his life. Following the Soviet demise, the ROCOR became loosely affiliated with the Russian Orthodox Church of the Moscow Patriarchate. The latter church has expressed disagreement with the former over the ROA, while not seeking a stumbling block over this matter.

Among those non-German elements allied in one way or the other with Nazi Germany, the ROA doesn’t have the same negative baggage of committing atrocities along the lines of the Croat Ustaša and the predominately western Ukrainian situated Ukrainian Insurgent Army. Not everyone allied with the USSR in WWII was a Communist. Conversely, the Nazi allies weren’t all motivated by Nazi ideology. So there’s no misunderstanding, this observation isn’t intended to equate the USSR with Nazi Germany. Notwithstanding, the Soviet Union (especially under Stalin) had some brutal aspects, which for ethical reasons shouldn’t be glossed over.

For much of WWII, the Nazi hierarchy limited the activity of the ROA on account of sensing that the anti-Stalin/pro-Russian grouping, sought a strong Russia, which conflicted with Nazi aims. Towards the end of WWII, the Nazis out of desperation gave the ROA a freer hand. By then, the ROA realized that the Nazis would eventually lose. Regardless, the ROA were sympathetic to Czechoslovakia.

In WWI, the Germans used Lenin to benefit German war aims. During WWII, Nazi ideology came in the way of fully utilizing a Russian to help the German war effort at the time. Not everyone in Germany was so suspect of the ROA. Wilfried Strik-Strikfeldt, was a Baltic German Russophile in the Wehrmarcht, who sympathized with the ROA. Regarding present day circumstances, a loose analogy brings to mind pro-Russian/anti-Soviet/pro-American views in the US disagreeing with the anti-Russian leaning variant, having greater influence in US mass media and body politic.

In contemporary Russia, there’re different views of Lenin. As an example, Russian President Vladimir Putin on more than one occasion has been critical of him. Post-Soviet Russia has taken a more balanced overview of the anti-Communist Russian Civil War era Whites. The Andrey Vlasov led ROA doesn’t deserve greater scorn than the Ustaša and Ukrainian Insurgent Army. In Nazi captivity, the ROA didn’t express the kind of anti-Russian views evident among some of the current Russians who’ve been brought up in a much freer society than what the USSR was, especially under Stalin. This last point leads me to believe that the ROA at large wouldn’t be so openly hostile to the present situation in Russia.

Wesolowsky’s aforementioned RFE/RL piece raises some contentious issues that (for accuracy sake) should be followed up on. Czech academic Jan Šír, is uncritically quoted as saying that the Russians link the events of 1945 and 1968 as a matter of the Red Army liberating Czechoslovakia.

Contradicting Šír, post-Soviet Russians on numerous occasions, have criticized Soviet actions like what happened in Czechoslovakia in 1968, when a Soviet led Warsaw Pact military intervention thwarted reform elements in that country. Not too long ago, the BBC’s Steve Rosenberg had a lengthy documentary dealing with Warsaw Pact related issues and their impact on the present. Filled with biases against Russia, this feature had a pointed moment to the contrary. Towards the end of this documentary, Putin makes a clear condemnation of acts like the 1968 intervention in Czechoslovakia.

In 1945, the might of the Red Army had the Nazis on the run. It was Soviet strength, which primarily defeated Nazi Germany. In turn, Prague was generally positive towards the Soviet advance into that city. Between the two world wars, Czechoslovakia was the most democratic of nations that were to later become part of the Warsaw Pact. Prior to WWI, Czechs and Slovaks, weren’t known for being negative towards Russia. Although, non-Communist, pre-WWII Czechoslovakia had good relations with the USSR. During this period, Czech-Soviet relations were better than Czech relations with Germany, Poland and Hungary.

In his RFE/RL piece, Weslowsky notes the Molotov-Ribbentrop agreement without any mention of the earlier Nazi, Polish and Hungarian activity against Czechoslovakia. The USSR offered to defend Czech territory, in conjunction with Western (specifically French) support. The good Czech-Soviet relationship and the hope that the Nazis would strike against the USSR, partly motivated the West to not militarily side with Czechoslovakia. Seeing this behavior, the USSR saw a need to reach an arrangement with Nazi Germany.

For a brief period following WWII, the USSR didn’t disrupt a politically pluralistic Czech government. At the time, there was a formidable (in popularity) Czech Communist Party, along with non-Communist Czechs, who weren’t generally antagonistic towards the USSR. By 1948, this pluralism diminished.

Despite the past Soviet behavior and post-Soviet Western supported anti-Russian advocacy in the Czech Republic, numerous Czechs aren’t ingrained with such a noticeable animosity towards Russia. Some prominent Czech ice hockey players have played for Russian teams in the Kontinental Hockey League without regret. Jaromír Jágr, arguably the greatest Czech player in that sport, played for a Russian team, wearing number 68 in honor of the 1968 reform movement known as the Prague Spring. Along with Tomíček, Czech political figures Václav Klaus and Miloš Zeman, have exhibited a stance towards Russia which isn’t overtly antagonistic.

Michael Averko is a New York based independent foreign policy analyst and media critic. This article first appeared at the Strategic Culture Foundation’s website on December 14.

One thought on “Czech-Russian Relations And The ROA: Conflicting Historical Narratives – Analysis”