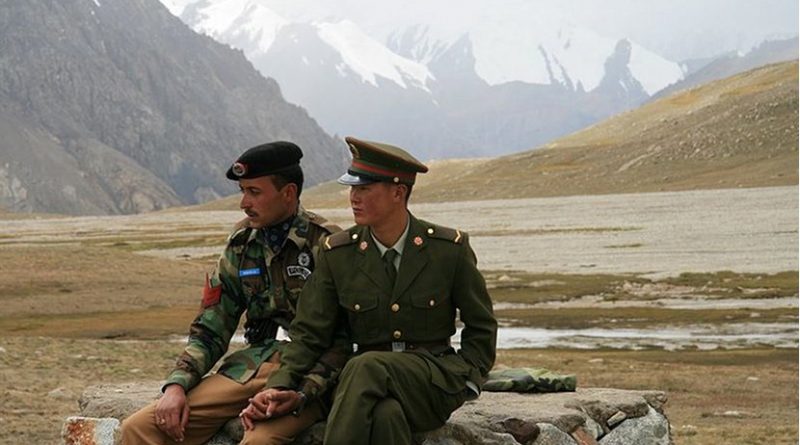 With help from the Belt and Road Imitative, China strives to compete with India for influence throughout South Asia.

The past year has marked a turning point in Sino-Indian relation in more ways than one. If 2017 began with India taking a strong stance against China’s ambitious Belt and Road Initiative, it ended with China’s tightening grip in South Asia. In between was the 73-day long Doklam standoff between Asia’s two giants at the India-Bhutan-China tri-junction. The year’s events underscore the challenges for this bilateral relationship in ways few would have anticipated in the recent past. India and China grapple with rapid deterioration in their bilateral relations and increasingly jostle with each other for strategic space. And South Asia is fast emerging a theater of Sino-Indian rivalry.

China made an ambitious move in South Asia in December by hosting the first trilateral meeting with the foreign ministers of Pakistan and Afghanistan. Afghan Foreign Minister Salahuddin Rabbani and Pakistan Foreign Minister Khawaja Asif joined their Chinese counterpart Wang Yi in Beijing, where they reportedly agreed to work together to tackle the threat of terrorism. From China’s perspective, such terrorism is intricately linked to the security of its restive Xinjiang province. Beijing also gave a push to the Afghanistan peace process, in limbo since 2015. Garnering much attention is the suggestion that China and Pakistan consider extending their $57 billion China-Pakistan Economic Corridor, or CPEC, to Afghanistan. The Chinese foreign minister publicly expressed hope that the economic corridor could benefit the whole region and act as an impetus for development, but China’s moves were aimed at India which has been steadfast in its refusal to accept CPEC.

Over the years China has managed to tighten its economic bonds with India’s neighbors. The Maldives became the second country in South Asia, after Pakistan, to enter into a free trade agreement with China late last year. The Abdullah Yameen government pushed the trade agreement through the nation’s parliament when the opposition was not in attendance at the parliamentary session. The principal opposition party, the Maldivian Democratic Party, remains opposed with concerns centering around a possible increase in the trade deficit, already tilted in China’s favor, and the strategic direction of the country.

After Xi Jinping’s visit to the Maldives in 2014, the first by a Chinese president, the nation officially became a part of the “21st century Maritime Silk Road.” China quickly expanded its economic profile in the Maldives by building mega infrastructure projects, including development of Hulhule and a bridge connecting the bridge to Male as well as the country’s main international airport. A constitutional amendment allowing foreign ownership of freehold land was passed in 2015, which coul potentially enhance Chinese military presence in the island nation. Already, Chinese naval ships are regular visitors to Male.

India’s ties with Nepal too have entered a difficult phase with the decisive victory of the coalition of the Communist Party of Nepal (Maoist Centre), led by Pushpa Kamal Dahal, known as Prachanda, and the Communist Party of Nepal (Unified Marxist Leninist), led by Khadga Prasad Sharma Oli. Soon after his victory in October, Oli visited the border with China in Rasuwagadhi and declared that the Rasuwagadhi-Kerung border point, the only trade and transit point between Nepal and China, would be upgraded to international standards. This is an implicit challenge to India which has been Nepal’s principal link to the world. Oli blamed the blockade along the Nepal-India border in September 2015 by Madhesi groups on India, emerging as a vocal critic of New Delhi’s policy towards Nepal and making his intention of taking his country closer to China clear. He secured China’s support during the six-month long blockade and after being forced to resign as the prime minister, he accused India of effecting a government change by encouraging Maoists to withdraw support from his government via “remote control.” The government of Prime Minister Sher Bahadur Deuba who succeeded Oli decided to cancel a major $2.5 billion hydroelectric project awarded to Chinese state company China Gezhouba Group in November 2017 much to Beijing’s annoyance. The new Communist government in Nepal is likely to reverse that decision as Oli had warned against revoking the plan. “The issue here is about foreign investment and such decisions cannot be taken on a whim,” he had said. Beijing is looking into the possibility of connecting Kathmandu to Tibet’s capital Lhasa via railways at an estimated cost of $8 billion as part of the Belt and Road Initiative.

While China seems to be enjoying an upswing in relations throughout South Asia, not everything is going in its favor. The much-hyped CPEC project confronts serious problems. Pakistan reportedly rejected China’s offer of assistance for the $14 billion Diamer-Bhasha Dam, asking Beijing to take the project out of the $60 billion CPEC so that Pakistan can build the dam on its own. Because the project was in disputed territory, the Asian Development Bank had refused to finance it. China was keen to step in, but Pakistan realized that the tough conditions imposed by Beijing pertaining to the dam’s ownership, operation and maintenance costs, as well as security, made the project politically and economically untenable. The Hambantota Port in Sri Lanka offers a cautionary example: China lent money and later took over the indebted port. Pakistan therefore gravitated towards self-financing. Differences also emerged over the use of the Chinese yuan in Pakistan along the lines of the US dollar. Pakistan rejected this demand as well, arguing that common use of the yuan in any part of Pakistan, exchangeable like the dollar, had to be on a reciprocal basis.

The initial euphoria surrounding CPEC has given way to a more realistic appraisal of the project’s costs, with Beijing and Islamabad each reassessing the terms of their engagement. While China is demanding greater autonomy and security in operations, Pakistan finds it difficult to accede to most of these demands. Growing voices in Pakistan suggest that China may be a bigger beneficiary from CPEC than Pakistan. The expectation is that China will engage in its modus operandi of importing goods and labor for the projects at the expense of the local market with Islamabad left carrying the burden of paying interest on loans to Chinese banks well into the future.

Such disputes may settle or intensify. But Sino-Pak relations are unlikely to be downgraded by either side as both view them as critical in managing India. Following the recent suspension of US credit to Pakistan, China has become an even more indispensable partner. Smaller states in South Asia have long used the China card to balance India’s overweening regional presence. Now with China’s heft in global politics at an all-time high, the temptation to leverage Beijing’s clout in bilateral ties with India is even greater. Yet geography is a reality that cannot be changed. As New Delhi asserts itself as a leading global power, it must manage not only its immediate neighborhood with greater strategic vision but also monitor China’s growing clout in South Asia. This, after all, is just the beginning of Sino-Indian jousting in South Asia.

One thought on “Sino-Indian Jostling In South Asia – Analysis”