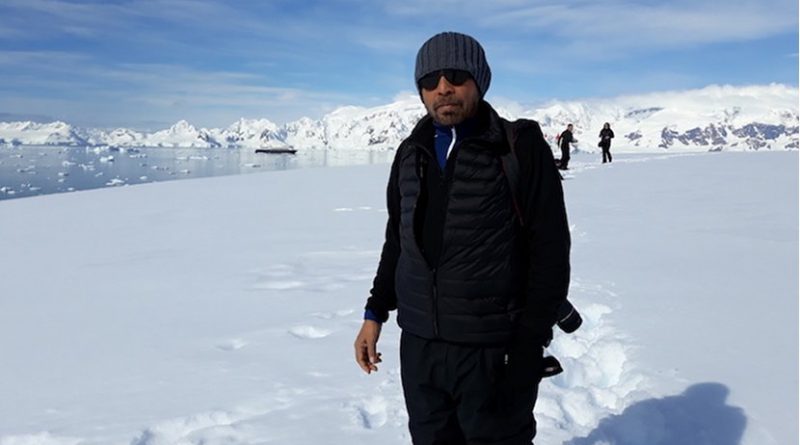 The outlines of the frozen continent, seen from the approaching expedition ship Silver Cloud, are so hauntingly beautiful, serene and inviting. The snow covered surfaces, the glaciers glistening in the Antarctic sun are stunning. But without much warning the weather changes, the gloom sets in and the scowling glaciers threaten menacingly. The environment of the Antarctic has remained pristine largely due to its inhospitable nature. It is the only continent with no native human population.

Even plant life from elsewhere has been unable to invade Antarctica due to the fierce winds that circle the region and the vicious currents that lash the continent. The protection of the continent’s largely unspoilt environment has become an act of faith, so much so that tourists and scientists who disembark from vessels are required to dip their boots in disinfectant and the rules are strictly enforced by boat crews.

The resources hidden on the continent are too difficult or too costly to access at present. The European and American whalers and sealers, who mercilessly hunted these beautiful animals, did unbelievable damage to whale and seal populations for almost two centuries.

The whales, the gentle giants of the oceans, were hunted almost to extinction by European and American whalers. The biggest animal on earth, the blue whale, was valuable commercially and an easy target. The blue whale population is estimated to have been reduced from 350,000 to roughly 18,000 before whale hunting was banned in 1986 by the International Whaling Commission established under the International Convention for the Regulation of Whaling, 1946.

The humpback population was reduced by 98 percent. Australia banned whaling in 1978. The blubber of whales was a prized commodity then. A single blue whale could provide about 50 tons of blubber that was used to produce cosmetics, soap and leather. Whale oil was made into candles and was used as lamp fuel. An American consulate was established in Galle, Sri Lanka, in 1857 mainly to serve the interests of U.S. whalers.

But the whalers did not stay on this inhospitable but strikingly beautiful continent. They just came to hunt the gentle giants. Today Whalers Bay, Deception Island, is littered with huge rusty steel tanks used to store whale oil. Rotting whaling boats bring back memories of Herman Melville’s “great American novel”, Moby Dick – a tale descriptive of a sad chapter in the history of human-whale contact.

Whale bones scattered on this graveyard shore glisten in the Antarctic sun evoking memories of a tortured past. So many animals would have been slaughtered on the shores of this silent continent. Once, the discarded innards of whales attracted thousands of sea birds.

The belated awakening of the conscience of the need to conserve nature for our own benefit forced the industrialised nations to put in place measures to protect these species. Like in many other instances, it was an after thought and perhaps too late. Once the damage had been done and the conscience pricked, as has happened time and time again in the all conquering West, whaling nations got together and concluded the International Whaling Convention 1946. Today whaling is banned except for scientific purposes.

Japan, Iceland and Norway continue to hunt whales under this exception despite the protests of environmental NGOs, such as Greenpeace, Campaign Whale, Whale and Dolphin Conservation Society and Sea Shepherd. Since 1978, over 18,000 whales may have been killed by these three nations, Norway takes the largest number. But curiously, it is the Japanese whaling activity that arouses the unmitigated ire of NGOs. The total number of whales has increased since the ban.

Interestingly, the large concentration of whales off Sri Lanka may not be a population that migrates seasonally. Or at least all may not be migrants. 26 species have been spotted in Sri Lankan waters, including the huge blue whales. They may feed and produce offspring in the same area unlike all other whale populations of the world.

Strong upwelling ocean currents off the narrow continental shelf, the furious south west monsoon, and dozens of tropical rivers pouring out in to the ocean, may produce adequate food for small fish to flourish for the whale population to sustain itself. All other whales seem to migrate to tropical waters either from the Antarctic or the Arctic seas to mate and produce offspring.

The expedition ship Silver Cloud had experts on almost every relevant aspect. Whales, birds, penguins, the weather, geology, etc. We learned that whale calves, weighing 3 to 5 tons and about 5 meters at birth, drink 200 litres of milk every day. They are nursed for about 10 – 13 months. The brains of whales, about 9 kg in weight, may be more developed than human brains in certain areas.

Observing their behaviour and reading about them, one begins to wonder whether they are much more advanced than we think with our imagination crowded with religious and social indoctrination. A twenty meter hump back whale with a calf spent much time blowing bubbles in a circle, possibly to scare a shoal of krill or small fish in to a tight ball before sucking it up through its mighty jaws.

The bubble making activity of humpbacks is not well understood. However, to plan and work out this strategy for hunting purposes may require more brainpower than mere instinct. Then she inquisitively approached our Zodiac to within a couple of metres with its small eye firmly focused on the occupants of the boat.

The major attraction on the frozen continent is the penguins. Adelie penguins, (a true Antarctic penguin) occupy the rookery at Brown Bluff. Literally thousands of them. When the wind blows in your direction, you realise that their diet of fish and small crustaceans makes penguin rookeries smell distinctly repulsive.

Small groups, whose movements resemble that of small dolphins, skim amazing distances through the freezing waters looking for fish. The behaviour of penguins that have no known predators on land is intriguing. (But skuas and giant petrels steal penguin eggs and their chicks).

They are curious and trusting. They are incredibly industrious and persistent. They may fall over any number of times on the ice, and they do, but they will pick themselves up and waddle on their short legs to their rookery, which may be a few hundred meters up a snow and ice covered hill. They always find their way back to their nests.

Climate change is affecting penguin colonies as well. This year, the late snow has prevented hundreds, if not thousands, of eggs from hatching.

Other types of penguins also inhabit Antarctica. Magellan filled four ships with penguin meat as he sailed past Cape Horn to feed his crews.

Today the Antarctic Treaty System governs conservation, ban resource extraction and overt military activity in this starkly beautiful continent. A cynic has commented that the voluntary and careful compliance with the treaty system is a case of avoiding mutually assured environmental damnation. If one breached the treaty or non-treaty commitments, many others also would, with unknown consequences for humanity.

For the purposes of the Antarctic  treaty system, Antarctica is defined as all of the land and ice shelves south of 60°S latitude. The treaty entered into force in 1961 and currently has 53 parties. It sets aside Antarctica as a scientific preserve, establishes freedom of scientific investigation, and bans military activity on the continent. The treaty was the first arms control agreement established during the Cold War. Since September 2004, the Antarctic Treaty Secretariat Headquarters has been located in Buenos Aires.

Among the more important treaties affecting Antarctica, is the Convention for the Conservation of Antarctic Marine Living Resources (1982), headquartered in Hobart, The Protocol on Environmental Protection to the Antarctic Treaty was signed October 4, 1991, and entered into force January 14, 1998.

This agreement prevents the development and provides for the protection of the Antarctic environment through five specific annexes on marine pollution, fauna and flora, environmental impact assessments, waste management, and protected areas. It prohibits all activities relating to mineral resources except scientific study. A sixth annex on liability arising from environmental emergencies was adopted in 2005, but is yet to enter into force.

There is no applicable legal system in Antarctica but countries give effect to their treaty obligations through their own national laws.

55 countries have research stations in Antarctica. One of the largest belongs to Argentina, the Esperanza Base, Hope Bay, Trinity Peninsula (which I visited). It is staffed throughout the year. In order to strengthen Argentina’s claim on the continent, they even had an Argentinian woman give birth to her baby at this station. Families live at Esperanza and children have a school.

*The author is former Ambassador and Permanent Representative of Sri Lanka to the United Nations, and former Foreign Secretary.Dr Kohona visited Antarctica on board the expedition vessel Silver Cloud recently. Read his previous article here.

Home » Antarctica: The Tale Of A Beauty Condemned – OpEd