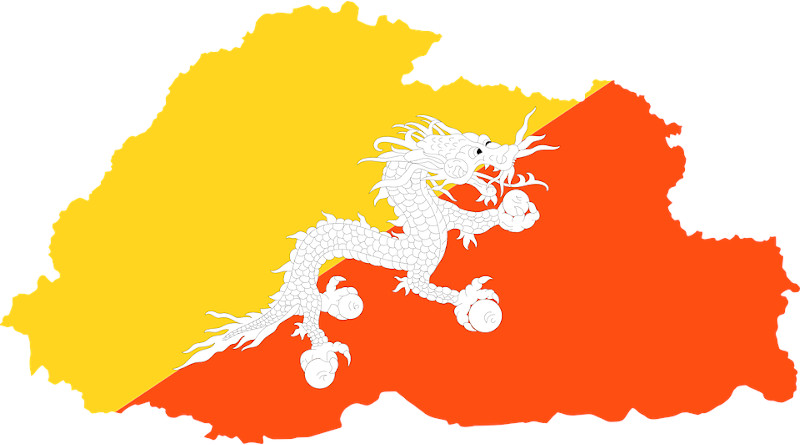 Though the Government led by DNT and its leader and Prime Minister Dr. Lotay Tshering have done fairly well, yet its popularity is having a steep decline in terms of membership! Normally membership in a Ruling Party increases many fold when it is in power, but in Bhutan it appears to just the opposite.  The Ruling Party is yet to give a proper reason for the decline!

The National Day Celebrations on December 17

The 112th National Day was celebrated on a grand scale in Thimpu with the Home and Cultural Affairs Minister Lyonpo Sherab Gyeltshen taking a personal interest and responsibility in overseeing the events!

The main focus of the National Day celebration was on the Monarchs of  Wangchuk Dynasty that re affirmed the continuing commitment of the country to Tsa Wa Sum  meaning the King, the Country and the People.

A photo exhibition and Laser Light show on the Wangchuk Dynasty was the main highlight of the event.

The King as before gave some policy directions for the country to progress in keeping with the changing dynamics of the region. He said

The King then made the most important announcement of the day of his plan for introducing a National Service for youths before the year 2022.

The National Service for youths reaching the age of 18 will be for one year without exception that will include three months of military training and a nine months’ programme in areas like agriculture, entrepreneurship, computers and coding, health etc.

The King added that the National Service is not only a “youth programme”, but a programme that recognizes that the future of the nation is dependent on the youths of today.

The King’s proposal has been generally welcomed by all though much would depend upon how strictly the Government would  adhere to the rules of the service without exception!

In the much-delayed report of The National Statistics Bureau (NSD), it was seen that the GDP growth rate for 2018 just touched 3.03 percent for the second year in succession and the outlook for 2019 does not appear to be better either.

With the commissioning of Mangdechu Project (720) Mw, some improvement could be expected in the coming months but is it is not likely to have a major impact on the economy as a whole.  There has been a significant slowdown in agriculture from 6.30 to 4.94 percent and the trade balance deficit continued with a steep decline of 41,951.28 million in 2018.

A steep decline in the availability of Indian Rupee as witnessed five years ago is looming large affecting all sectors of the economy.

The Prime Minister gave two reasons for the economic downturn.   First is the current Planning process and the economy takes a hit every five years.  Second and more importantly, the dip in the Indian economy virtually affects  the economy of Bhutan that depends very much on the bigger country.  He was hopeful that the economic figures will improve in the coming year.  He said that he understood the need for a long-term economic policy and would be working on it soon.

The country is too dependent on Hydro power and Tourism and the need to diversify is felt.  Non-Performing loans both in the construction and hospitality industries are other reasons for the downturn.

Steep Decline in the membership of the Ruling Party

Despite an innovative budget, a steep hike in the salaries of Government servants as also in public corporations and fairly good governance with a no nonsense Prime Minister, the Ruling Party is still seen to be deserted by its members and its present membership stood at 151 from a figure that was running over 12,000.

Other parties including the opposition DPT have been seen to be holding on their own without any perceptible decline and it is almost unimaginable that the Ruling Party should suffer such a steep decline! The figures of member ship of other parties as published shows the BKP 1203 from 1215, DPT 5500 from 4705, PDP 5403 from 5520.

There appears to be no real reason for the ruling Party members resigning in large numbers particularly when the Party is in power and has not run into any major difficulty.  This perhaps needs to be examined as the Party cannot win the next General Elections if this trend continues.

For a small country like Bhutan, with limited resources except in hydropower and forestry, the country is doing well. It is seen to be taking a leading and active role in conferences relating to climate changes too.

There is no doubt that the monarchy with its benign presence has been of great inspiration that ensured stability, peace and above all in pursuit of Gross National Happiness.  Credit thus goes to the Monarchy on whom the people have continued to have great faith and reverence.

INTRODUCTION:  China is one of the strongest nations in the world both militarily and economically, the biggest market, the epicenter

Not All Abortion Polls Are Equal – OpEd