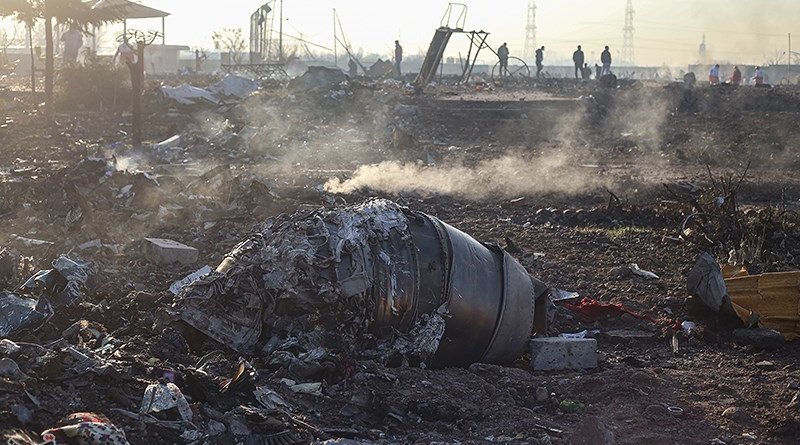 On Sunday, February 16, 40 days after the horrific downing of the Ukrainian airliner, students gathered at Amir Kabir University in Tehran to protest the regime’s brutal crackdown against protesters and the downing of flight 752, while also demanding the release of political prisoners. “1,500 were killed in Nov. protests,” they chanted. They asserted that the downing of the Ukrainian plane is a manifestation of 41 years of lies and blackmail.  The students also call for a boycott of the upcoming parliamentary “elections” on Feb 21. chanting “No voting, no ballot box, boycott the elections.”

The students were attacked by the clerical regime’s plainclothes agents and the intelligence department of the university.

These mega-lies have become a challenge between the Ukrainian government and the mullahs in Tehran, and it seems that governments are beginning to find out what Tehran has done to the Iranian people through its lies in these 41 years.

Ukrainian President Volodymyr Zelensky has confirmed the authenticity of the audio file of a conversation between Tehran air control and a pilot of an Asseman passenger plane near the airport, which he says he obtained from a source in his country’s intelligence service: “This tape shows that the Iranian regime knew from the beginning that “Our plane was shot down by a missile and was aware of this from the shooting moment.”

This audio file, which reveals a new public lie of the Iranian regime’s officials is being released as the subject of the accident investigation has become a source of growing tension between Tehran and Kyiv.

“The Iranian authorities after first saying they were ready to send the black boxes to Ukraine. refused to do so without mentioning any reason, “

Iranian authorities have claimed to have delivered the tape themselves to Ukraine, “the second phase of lies has begun,” according to the Jahan Sanat newspaper (February 4).

A regime airline official who thinks he has taken the world’s wisdom hostage has stepped forward, saying, “The release of the audiotape by the Ukrainians has made us stop giving them any documentation.” Following the allegation, the President of Ukraine declared: “The Iranian regime’s air control has by no means delivered the conversation tape to Ukrainian investigators who have traveled to Iran. Ukraine has gained these conversations independently.

Canada urged the United Nations on Wednesday, February 5th, to put pressure on the Iranian regime for delays in analyzing the black boxes of the downed Ukrainian aircraft.

Now the question for many international experts are who ordered the firing, was it human error? IRGC’s Air Force Commander Haji Zadeh asserted that the operator was interviewed by authorities, but the Iranian regime refused to broadcast the interview.

Haji Zadeh insisted that he had informed the highest authorities in the early hours, saying: “When I was informed of the shooting I was in the west of the country, I immediately informed the authorities on Wednesday morning that this had happened and that I pointed out with a high probability that we have fired at the Ukrainian plane. “