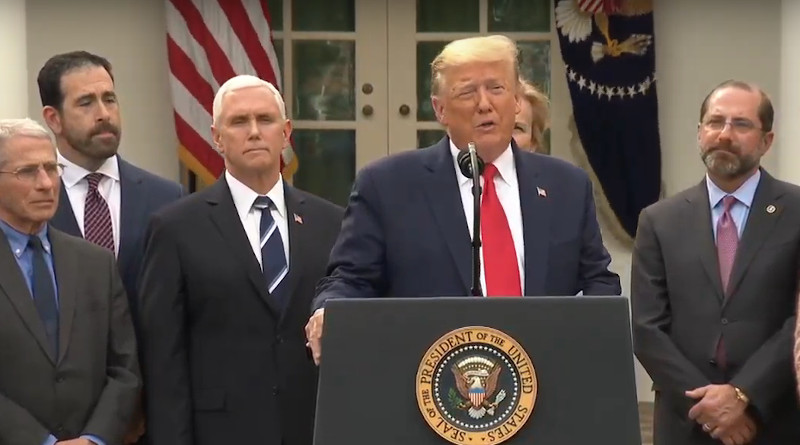 When the US killed Qassem Soleimani at the beginning of this year, everyone panicked, expecting Iran to strike back and hit hard. A red flag was raised in Qom — a flag of vengeance for the spilled blood of Soleimani. However, Iran’s response, to everyone’s surprise, was mild; one could even qualify it as symbolic. It hit two bases in Iraq after making sure the US had emptied them of personnel and weapons. So why now? Does Iran see that the time is ripe for revenge, with Trump scrambling to respond to the exponentially spreading coronavirus? The virus has been threatening to wreck the robust economy that has been Trump’s main selling point to his constituency.

Now that it is re-election season, Trump cannot risk another foreign adventure, especially since the economy he overstretched with excessive spending is signaling a possible crash. The forced measures that Trump took to keep the upward momentum of the economy do not seem to be working anymore. Lately, when the Federal Reserve reduced the interest rateby half a percent, the market counter-reacted and dropped 5.8 percent.Last week, the market recorded the biggest single-day drop since the Black Monday crash of 1987. Analysts are pointing at the coronavirus as the most problematic issue facing the Trump presidency. If the economy tips, Trump will not get re-elected.

The Iranians know that, whichever Democratic Party candidate comes to the White House, they will likely go back to the nuclear treaty. Though an incumbent president has a higher chance of getting re-elected, two factors can override this advantage: One being a bad economy and the other being a foreign policy blunder. The Iranians want to make sure that Trump has both disadvantages in his re-election campaign. President George H. W. Bush, though he won the 1990-91 Gulf War — after which he had an approval rating of 89 percent— lost to Bill Clinton due to a bad economy. Nevertheless, the spoils of the first Iraq war reflected in a boom that benefited Bush’s successor. The other case is Jimmy Carter, with the hostage crisis in the wake of the Iranian Revolution making him a one-term president. In fact, the Iranians have already told Trump that they will ensure he suffers the same fate as Carter.

The Iranians act strategically. The two attacks on Taji could be the start of the unfolding of their plan. They think long-term and stick to their objectives. The Iranians are patient carpet-makers: They start with knots, working according to a scheme to reach the larger landscape. The two recent attacks could just be knots in their overall plan. Following the death of Soleimani, Hassan Nasrallah, the secretary-general of Hezbollah, said that the proper revenge would be to drive the US out of the region. After that, he added that there would be no need to fight with the Zionists, as they would leave on their own. Could they be starting their retaliation plan? Their attacks did come amid renewed requests from Iraqi parliamentary blocs for American forces to leave the country. Hassan Al-Kaabi, the head of the Badr Organization’s parliamentary group, said: “Washington or member states of the coalition are intransigent to leave Iraq, and insist on their stay without any legal permission. This will have negative and adverse repercussions on those forces.” The situation for the US is also becoming more complicated as the fragile state of Iraq is unraveling.

Multiple sources have criticized Trump over his response to the coronavirus, over which he has been accused of “incompetence.” The Trump administration has been critiqued for not testing enough people. As of March 13, only 13,953 people had been tested nationally. In Ohioalone, about 100,000 people are thought to have caught the virus. Two weeks ago, some testing kits provided by the government were found to be defective. The administration is scrambling to find an adequate and fast response to curtail the virus.

Trump does not need a foreign policy blunder. He might avoid a confrontation at any cost, cut his losses and leave Iraq under pressure. This would give Iran stronger leverage with the upcoming presidency.

In the wake of the attacks on its base, the US responded in a “proportionate” manner — far from Trump’s previous promises of “obliteration.” However, the Iranians are known to be pushing the limits. Their attacks did not come out of nowhere. They are part of an orchestrated and well-designed plan to get the US out of Iraq and Trump out of the White House.