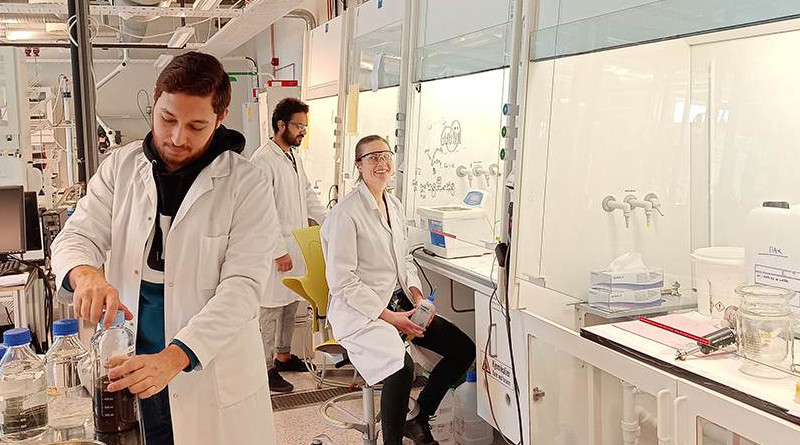 Gearing up to produce as many nanoparticles as possible for the COVID-19 test. The production operators for the team are Zeeshan Ali, Regina Lopez Fyllingsnes, Ahmad Bin Ashar and José Paulino Peris Sastre (missing). Photo: NTNU

Norway’s Ministry of Health and Care Services confirmed Friday that it will roll out coronavirus test kits developed by researchers from the Norwegian University of Science and Technology and St Olavs Hospital by the last week of April/early May. The kits will more than triple Norway’s testing capacity during the rollout.

After more than a month of strict measures to control the spread of the coronavirus in Norway, the Norwegian government says the rate of infection has fallen dramatically to below one. Now the government will try to stamp out flare ups of the virus by using an app and by beefing up its testing capacity using a new test kit developed by a team of researchers from NTNU and St. Olavs Hospital.

“The goal is to test anyone with symptoms of coronavirus infection. During the month of April / May, the aim is to increase capacity up to 100,000 tests a week. (Maximum capacity today is 30,000 tests per week.),” the ministry wrote on its Facebook page Friday afternoon, 17 April.

“It is primarily a lack of equipment that has limited capacity, and especially reagents. But now NTNU – the Norwegian University of Science and Technology — has developed a new method that makes the health services less dependent on reagents, so that the test capacity is increased,” the ministry wrote.

The test relies on magnetic nanoparticles to extract the virus’s genetic material— RNA — from a solution. Other more conventional tests use reagents, which are in short supply globally, for this step.