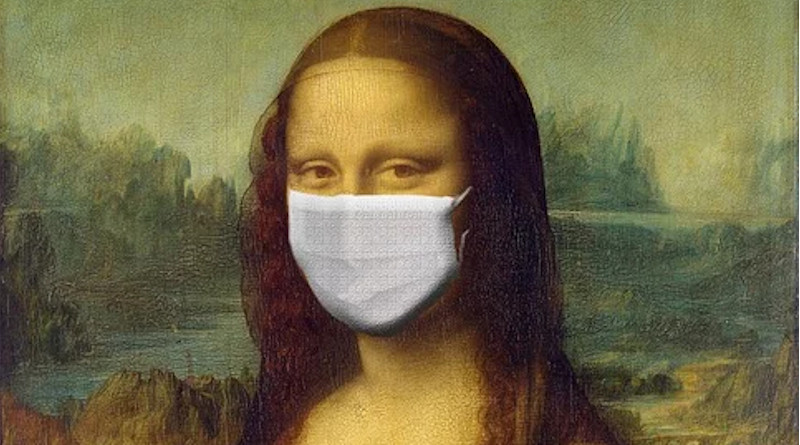 As billions of people find themselves either in lockdown or on the front lines combating the COVID-19 pandemic, the first celebration of World Art Day on April 15 is a timely reminder that “art has the power to unite and connect in times of crisis”, the head of the UN Educational, Scientific and Cultural Organization (UNESCO) said.

“Bringing people together, inspiring, soothing and sharing: these are the powers of art, the importance of which has been made emphatically obvious during the COVID-19 pandemic”, Audrey Azoulay said in her message.

Throughout self-isolation, art has nonetheless been flourishing. Pointing to peformers tapping into their creativity to relay health guidelines and share messages of hope – as well as neighbours singing to each other on balconies, and concerts online – Ms. Azoulay maintained that creativity abounds.

And the Mona Lisa – Leonardo da Vinci’s most famous masterpiece, the anniversary of whose birth, on April 15, has been chosen for the World Day – has been revisited in a variety of ways, including images of her self-isolating in the Louvre Museum, or covering her enigmatic smile with a surgical mask.

“This is how, despite the crisis, art is demonstrating its resilience today”, explained the UNESCO chief.

Paying tribute to the solidarity shown by artists and institutions at a time when “art is suffering the full force of the effects of a global health, economic and social crisis”, she flagged that this time of confinement can also be “a period of openness to others and to culture, to strengthen the links between artistic creation and society”.

Through the hashtag #ShareCulture, UNESCO has invited everyone to communicate their love of art by sharing it broadly.

The coronavirus pandemic has closed museums and cancelled concerts, plunging many cultural institutions into uncertainty and immediate financial loss while also threatening a long-term effect on the arts.

As the world waits for the current measures to be lifted, vulnerable groups who are unable to get online, exacerbating a global digital divide, have even greater difficulty in gaining access.

Keeping art alive requires the twofold approach of supporting cultural professionals and institutions, and promoting access to art for all, according to Ms. Azoulay. As these challenges require far-reaching cultural policies it will be necessary to “listen to the voices of the artistic world in their globality and diversity”, she stressed.

With the aim of affirming the resilience of art in during this difficult period and in preparing for the future, UNESCO has launched the “ResiliArt” movement, which, among other things, will consist of a series of global virtual debates with renowned artists and draw support for the cultural world throughout the crisis. Guidelines will be drawn on improving the protection of artists for future crises.

The UNESCO chief urged everyone to participate in “this strong impetus for culture” to prove that even in a period of personal distancing, “art brings us closer together than ever before”.

In Italy, for example, impromptu concerts, performed from apartment balconies, have become one of the features of life under lockdown. On UNESCO World Art Day on April 15, a professional violinist Aldo Sebastián Cicchini, a violinist from the Radiotelevisione Italiana (RAI) orchestra in Milan, told UN News how he is using his talent to help others through the crisis.

When the COVID-19 pandemic hit in Italy, he was involved in a project at La Scala, one of the most historic opera houses in Italy. But, as he explains, work ended after positive cases of the virus were confirmed there in late February. Aldo Sebastián Cicchini said:

“Life may never be exactly as it was before”

Everyone stopped: opera, cinema, theatre…everything. We are all worried about this, because it’s difficult to think about our work as it was before. Right now, it’s so hard to imagine going to a concert in a theatre filled with 1000 people! So, we are concerned that, once the lockdown is over, it will take several months to re-adjust, and life may never be exactly as it was before.

In March, one of my colleagues in the orchestra at La Scala called on every musician in Italy to open their window, or to go to the balcony, to perform at six in the afternoon.

The first time I took part it was a very cold evening. It was strange, because most of the neighbours didn’t know that I played violin! When I started playing, I felt quite shy, but after a couple of minutes, I could see people happy, and smiling. Then, after I had finished the piece, they were clapping, shouting, and demanding more!

I carried on playing, and they wanted more and more, so I told them, if you want this, let’s do it again tomorrow, at the same time. That was the beginning of everything.

From then on, I played many famous pieces from different countries, such as music from the movie “Cinema Paradiso”, “Claire de Lune” by Debussy, Carlos Gardel’s “Por Una Cabeza”, and “Imagine” by John Lennon. Although the acoustics are not great on the balcony, the music is bringing people closer together during this time of isolation. It is not a cure for the disease, but it is maybe a cure for our hearts.

I think that, in times like this, all the arts are very, very important. Right now, we need to survive, but surviving is not living. The beauty of art makes us united, and part of something that is bigger than us.

Here in my building, every time I played, despite the distance between us, we felt closer. It feels like we are a team, going forward together. And that’s the power of music. And, when I play, I am company to people who live alone, particularly older people.

Aldo Sebastián Cicchini concludes: “We still don’t know when the city, and the country, will reopen, but I hope that every day things will get better, and that the people don’t give up. Until then, I will continue to play for them.”

Note: This report draws on UNESCO and UN News.

Home » The Power Of Art In A Time Of Coronavirus Crisis